Assessing the future of North Sea oil and gas

The North Sea is a mature oil and gas province. Output from the two main producers – Norway and the United Kingdom – has peaked and the remaining reserves to be exploited are smaller and/or more technically challenging than those developed in the past, thereby shrinking potential returns. As several fields approach the end of their commercial lives, the decommissioning of offshore platforms and the accompanying bills are looming on a scale not seen before anywhere in the world. 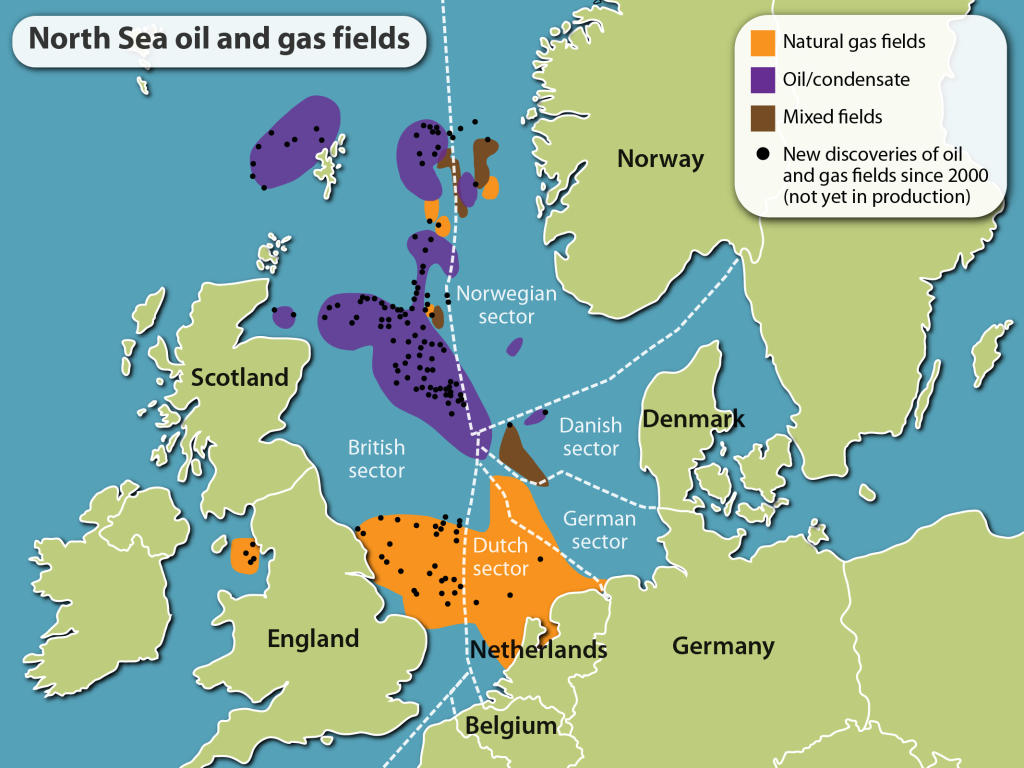 The fall in oil prices since 2014 has exacerbated concerns about the future of North Sea production. Its demise has been predicted on several occasions before, including during the last decade, when the area was perceived as “slipping into history.” Yet the region has proved surprisingly resilient, as shown by its recent increase in oil output for the first time in more than a decade.

If the right measures are taken by both the industry and the host governments, the North Sea can continue to provide new opportunities and a reliable supply of oil and gas for the foreseeable future.

Deep offshore drilling was classified as “unconventional” in the 1950s and 1960s, just as shale oil and gas are considered today. But that perception soon changed. A combination of higher oil prices, advances in technology and increasing resource nationalism in many developing countries encouraged oil companies to explore new areas. This included the North Sea, which emerged as an important oil-producing area in the 1980s and 1990s. The region’s political stability and proximity to major European consumer markets made it an alternative to and more reliable source of supply than the Organization of the Petroleum Exporting Countries (OPEC). By the late 1990s, Norway and the United Kingdom together accounted for almost 9 percent of global oil production.

In the past decade, the North Sea began a new phase. Oil output peaked and entered (until 2015) a period of long-term decline, driven by the maturing of many of the major fields and the lack of significant new discoveries. Oil production in the UK Continental Shelf (UKCS) peaked at 2.9 million barrels per day (Mb/d) in 1999, while the Norwegian Continental Shelf (NCS) peaked at 3.4 Mb/d in 2001. By 2014, the two countries supplied just over 3 percent of global oil. Gas production from the UKCS reached its maximum in 2000 at 108 billion cubic meters (bcm), though in Norway peak gas output has not yet been reached.

Recently, however, this decade-long decline in oil output has reversed. In the words of the International Energy Agency (IEA), the North Sea continues to surprise: In Norway, the production increase has lasted for two consecutive years (2014 and 2015) and exceeded estimates, while gas production also bounced back after a short-lived dip. In the UK, oil and gas production rose more than 7 percent in 2015 – the first rise in more than 15 years.

According to the Scottish government, this could indicate that the UKCS is “approaching a turning point” where production “could level off or improve over the medium term.” These startling developments leave some wondering whether the North Sea is experiencing a form of renaissance in an environment of low global energy prices. 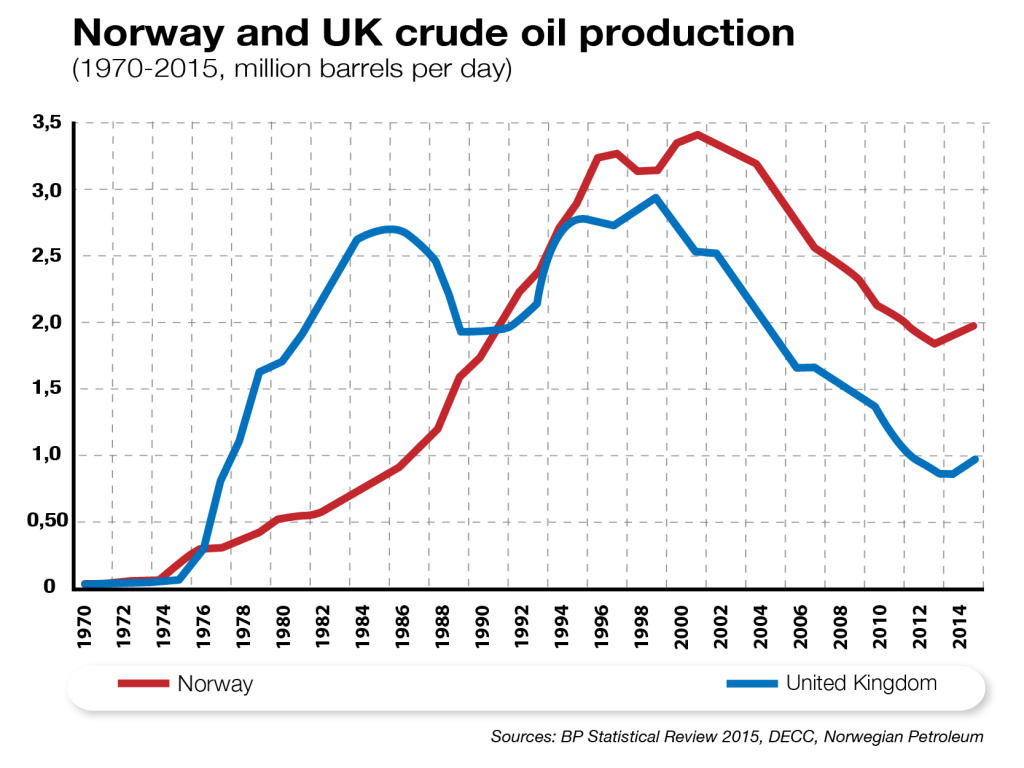 Several factors need to be taken into consideration when assessing the future of an oil and gas province that cannot be determined with precision. Accordingly, the UK Department of Energy and Climate Change (DECC) states that government projections for future production from the UKCS are its “best estimates rather than a definitive prediction.”

Despite the recent increase in production, both Norway and the UK are still producing well below their peaks. In this sense, the North Sea is unlikely to relive its heyday of the 1990s. The outlook for future production (both in terms of volume and duration) will depend on conditions in the industry and whether the North Sea remains commercially attractive on a cost basis.

The recent output increase was largely due to the development of previously discovered fields that were brought on stream during the preceding period of high oil prices. Some fields with relatively large volumes are still expected to start production soon, but others, which are not profitable enough at current prices, may see their development delayed. According to consultancy firm Wood Mackenzie, more than 300 discoveries in the UKCS, mostly made before 2000, remain without development plans. The upside, according to Norwegian Oil & Gas, an industry association, is that “since these projects are likely to be realized if oil prices rise in a long-term perspective,” the delays will end up extending the region’s economic life.

In terms of resources, the North Sea is still sitting on a sizable potential. In the UK, for instance, it is estimated that up to 22 billion barrels of oil equivalent (bn boe) remain to be recovered, which is not insignificant. Major discoveries cannot be ruled out. The Johan Sverdrup, discovered in 2010, is one of the five biggest oil fields on the Norwegian continental shelf, with expected resources of between 1.7 and 3 bn boe. According to the field partners, production is expected to start in 2019 and stretch well beyond 2050, with daily production estimated to reach 650,000 barrels.

Future exploration and development activities will depend on a combination of factors. The fall in oil prices since the summer of 2014 has threatened the commerciality of some fields, particularly those with low production and high costs. While the impact of oil prices cannot be understated, other variables such as costs, technology and government policy will also play an important role.

Perhaps the most pressing issue in a mature province with aging assets and infrastructure is cost. According to McKinsey & Company, buy accutane from mexico less than 15 years ago, the North Sea was “on a par with the most economic oil-producing regions of the world.” As the province enters its long-term decline phase, however, its costs have grown faster than in any other oil and gas producing region in the world, and indeed have grown more than in any industrial sector in the UK and Norway.

In its annual activity report on the UK Continental Shelf, the industry association Oil & Gas UK did not see the drop in oil prices as the root of the problem facing the North Sea. High costs, steep taxes and an under-resourced regulator were found to be the real challenges. One of the problems that high oil prices created was cost inflation. In 2014, according to Oil & Gas UK, unit operating costs were 60 percent higher than in 2011. These costs can be even higher in Norway.

Looking at the bright side, since costs tend to follow prices with a time lag of six to nine months, the decline in oil prices since the summer of 2014 seems to have initiated a cost deflation. Oil & Gas UK expects a 22 percent decrease in operating costs by the end of 2016, but it also argues that as much as a 40 percent reduction in costs is needed to safeguard the longevity of North Sea output. 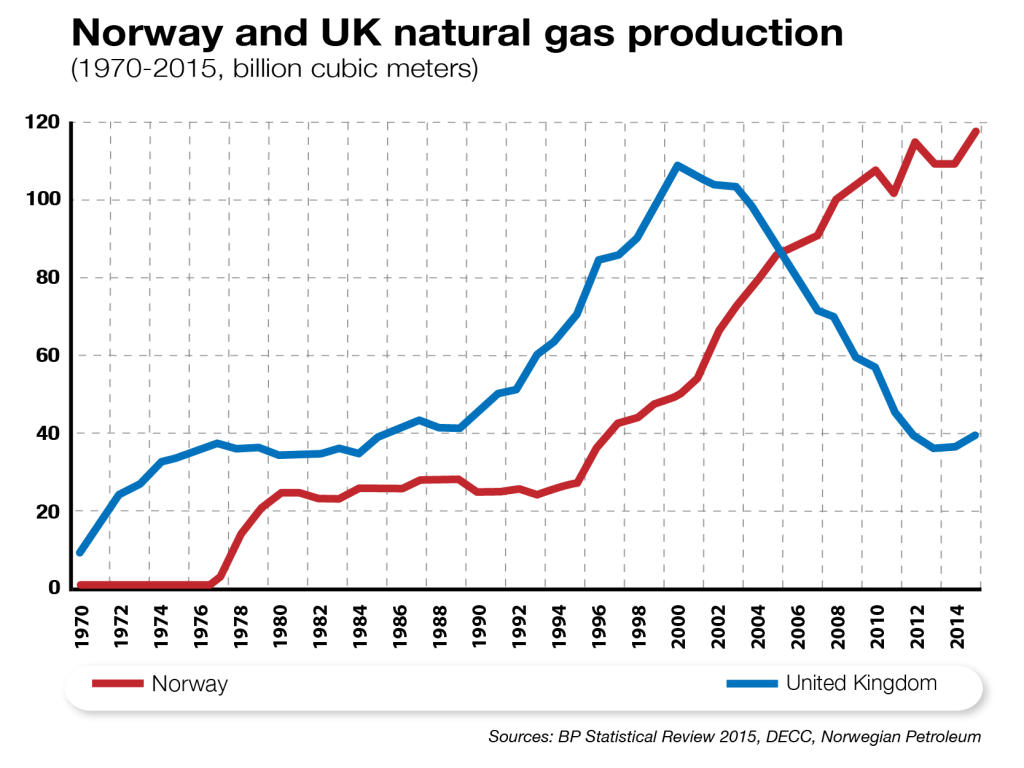 The cost argument has been used to plead for government support, especially by reducing the fiscal burden – a typical and sometimes justified appeal from the industry during periods of low prices. However, it should be kept in mind that an ideal fiscal regime has yet to be invented and various tax systems have their own limitations. All things considered, and particularly when compared with the policies adopted toward the oil industry by developing countries, both the Norwegian and UK governments have been supportive of private investment, especially as they have come to terms with the maturity of the North Sea fields.

This attitude can be seen in the use of profit- rather than revenue-based fiscal instruments. For instance, both Norway and the UK used to impose a royalty on revenues generated from oil and gas, but because the royalty is insensitive to costs and profits, it was abolished in both countries. Tax relief for difficult projects can also be found in the North Sea, including such generous provisions as a 78 percent refund of exploration costs in Norway and 100 percent first-year capital allowances in the UK.

This may help explain the findings of a survey carried out by the Fraser Institute, which found that despite the maturity of the North Sea fields, both Norway and the UK remain among the 10 most attractive jurisdictions in the world for the oil and gas industry.

Such collaboration with governments will continue to be needed, especially as decommissioning begins to play a bigger role in the North Sea. The industry itself also needs to focus on improving the efficiencies of its operations. A comprehensive report published by McKinsey & Company found that part of the increase in total expenditures in the North Sea was due to cost inefficiencies, which it recommended be remedied by increased cooperation between operators.

While such measures are unlikely to reverse the long-term decline in production, they can stretch the productive life of North Sea oil for decades to come – especially if government support is forthcoming.

For more than 50 years, the oil industry has mastered offshore technology in the North Sea and exported it to other regions around the world. Norwegian and British policies for managing this industry and the wealth it generates, while very different, have also set examples for other countries to learn from. Even with the costs North Sea decommissioning entails, it will also bring new opportunities and experiences that the industry and other energy-producing regions can benefit from.

The article was first published on 17 March 2016

PrevPreviousFiscal Stabilization in Oil and Gas Contracts: Evidence and Implications
NextChina and the Middle East – Is the Balance Shifting?Next