Although natural gas occupies a modest share in China’s primary energy consumption, its popularity is on the rise. Over the past ten years the country’s demand rose by 376 per cent. Such an emerging trend, if maintained, will shape the dynamics of natural gas markets and those of competing energy sources, with far reaching implications especially for the climate change agenda.

ALL THE studies which have attempted to forecast the global future of energy dedicate significant attention to one country – the People Republic of China, the world’s largest energy consumer since 2010.

Apart from nuclear, China figures in the top five largest consumers for each source of energy. It is the largest consumer of coal and hydropower; the second largest in the cases of oil and wind, after the US; the fourth for gas after the US, Russia, and Iran; the fifth for solar after Germany, Italy Spain, and Japan and the sixth for nuclear after the US, France, Russia, South Korea and Germany. These rankings are expected to change – especially for natural gas with worldwide implications on energy markets and carbon emissions.

China’s position as an energy producer should not be underestimated. It is the world’s largest coal producer; fourth largest oil producer after Saudi Arabia, Russia and the US; and sixth largest for gas after the US, Russia, Iran, Qatar, and Canada.

However, because of its rapidly growing demand, China increasingly depends on energy imports. It became a net oil importer in 1993, the first time since the 1960s, a net natural gas importer in 2007, then a net coal importer in 2009. Since relying on energy imports is considered as a threat to the country’s energy security, Chinese National Oil Companies (NOCs) have been acquiring energy assets around the world.

China, the world most populated country, needs every source of energy to fuel its large economy, which ranks second in the world just behind the US.

Coal, the fuel of industrialisation, has supported China’s economic growth. Widely available and cheap, it also helps to meet China’s quest for energy security. Coal provides more than 67 per cent of China’s primary energy. It is not surprising, therefore, to see that China is the world’s largest emitter of CO2, responsible for more than 27 per cent of the world total carbon emissions.

In 2013, however, the growth in both coal and oil consumption slowed. Oil demand increased at the lowest rate since 2009 while coal consumption rose by four per cent in 2013, less than half the ten year average (8.3 per cent). The culprit is a combination of a slower industrial sector growth and, to a lesser extent, policies to target pollution.

Meanwhile, the share of natural gas has been increasing, although starting from a low base since natural gas contributes to only five per cent of China’s primary energy – even less than hydropower. 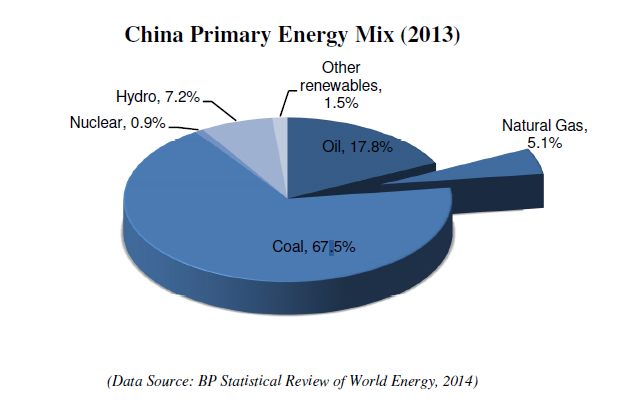 China’s gas demand has been rapidly rising: between 2003 and 2013, it increased by 376 per cent. In its 12th Five-Year Plan (2011 to 2015), the Chinese government aims to boost the share of natural gas in its primary energy consumption to eight per cent by the end of 2015 and 10 per cent by 2020 to alleviate high pollution from the country’s heavy coal use. The government plans to cap coal consumption to 65 per cent by 2017. Since coal and gas are substitutes in power generation, such a step will further support the role of natural gas.

As domestic production hasn’t been able to keep up with China’s appetite for gas, imports increased, mostly for Liquefied Natural Gas (LNG). China started to import LNG in 2006; by 2013, it was the third largest importer after Japan and South Korea, with imports coming mainly from Qatar, Australia, Malaysia and Indonesia.

In May 2014, China signed a multibillion historic deal with Russia after eight years of ongoing negotiations whereby Russia would supply around 38billion cubic metres (bcm) yearly for 30 years. The deal’s commercial terms have not been disclosed, but experts argue that Russia offered China many concessions including a discounted buy accutane online in uk price and stakes in Russian LNG terminals and energy companies.

China is not relying solely on gas imports. The Energy Information Administration (EIA) projects China’s natural gas production to maintain its growth momentum and more than double by 2040.

In the 12th Five-Year Plan for the Natural Gas industry released in 2012, China estimates total gas production from conventional and unconventional to reach 138.5bcm and 37.5bcm by 2015, respectively, with consumption set at 176bcm target.

Although, currently, China produces more Coal Bed Methane (CBM) than shale gas, it is the latter that has been capturing headlines around the world.

In 2013, shale gas output reached 200 million cubic meters (Mcm), while CBM production was 3bcm. CBM production is struggling due to more challenging geologic conditions and low well productivity. Meanwhile, shale gas production increased by nearly seven times from 2012 to 2013. This is, however, well below the official, ambitious targets of 6.5bcm for 2015 and 60-100bcm by 2020.

According to the EIA, China holds the world’s largest technically recoverable shale gas resources in the world. BP’s 2035 Energy Outlook describes China as the most promising country for shale growth outside North America; together these two regions are expected to account for 81 per cent of shale gas production by 2035.

Despite this potential, China’s shale industry faces many bottlenecks. On the one hand, there is the given, complex geology, and on the other hand, several man-made obstacles exist throughout the supply chain.

China’s shale gas resources lie at a greater depth than those in the US and in more challenging, mountainous terrains. Infrastructure, especially for transport, is also limited. These two factors contribute to increasing costs. The speed at which these costs can be reduced will determine the speed in which shale gas will be developed. Technology will be central.

Unlike the US, where the private sector, mainly small and medium-sized enterprises, and competition drove the shale revolution, the gas industry in China is dominated by the Chinese national oil companies (NOCs), in particular China National Petroleum Corporation (CNPC), Sinopec, and China National Offshore Oil Corporation (CNOOC). Of the shale gas resources in China, 77 per cent of favourable blocks and 80 per cent of potential resources overlap with these companies’ oil fields. The de facto monopoly limits technological development.

The government is trying to modify the situation, albeit so far modestly. This can be seen in the country’s first and second licencing rounds in 2011 and 2012. The second round was less restrictive, in a sense that the classification of shale gas was changed from a ‘natural resource’ – access to which is restricted to NOCs – to an ‘independent mining resource’, hence allowing private Chinese firms to bid for blocks. While in the first round, direct participation of international investors was forbidden, in the second round, foreign investors were allowed to bid but as minority partners with Chinese firms.

A lot remains to be done, especially in terms of breaking the monopoly of the NOCs over high-quality shale gas resources and pipeline network, reducing the regulatory burden and strengthening the intellectual property rights.

An additional measure the Chinese government is trying to implement to encourage investment in shale gas is gradually introducing market-based prices. China’s natural gas prices have been traditionally regulated and generally below international market rates. In 2011, price reforms started in some provinces. In 2012, China opened its first natural gas spot trading market at the Shanghai Petroleum Exchange as part of the reform.

The effectiveness of various new policies will be tested in the third licencing round which was originally scheduled for the beginning of 2014 but has been delayed.

The growing popularity of natural gas in China has far reaching consequences which should be welcomed by the international community especially if it curbs China’s coal consumption. Experts argue that switching one per cent from coal to gas in power generation would generate carbon savings equivalent to an increase of 11 per cent in renewables share in electricity. Meanwhile, competition for gas resources and supplies will increase, and the Asian gas market is likely to look increasingly different by the end of the decade.