EU Energy Governance: Time for a change of direction

How is EU Energy Governance facing up to the era of rapid change in the world’s energy mix, and to the big drop in crude oil prices?

The “more Europe” applies in the area of physical interconnectors, gas and electricity and the appropriate grid systems, their funding, and the complex regulatory changes, needed for the transmission of electric power or pipeline gas across borders. We could then have a genuine competitive market in Europe, in which gas and electricity can be priced in a competitive way. 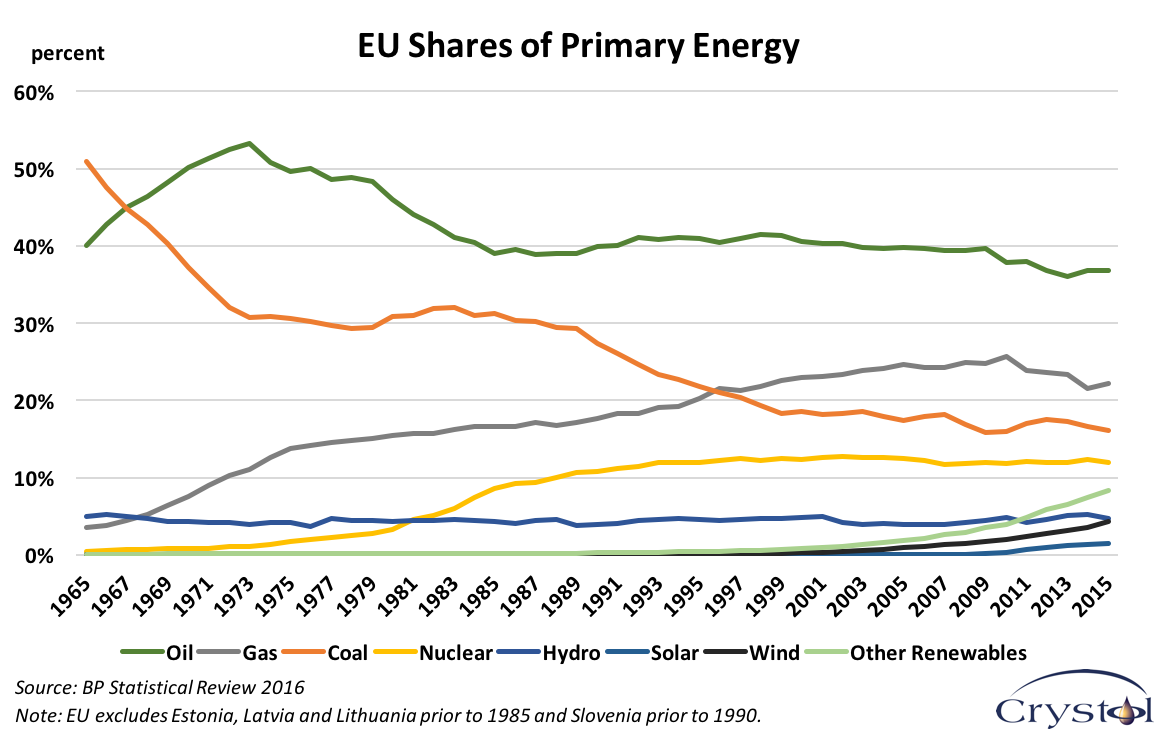 Furthermore, the Central and Eastern European economies which are currently over-reliant on Russian (Gazprom) supplies, would then begin to have a greater number of reliable alternative sources, and hence greater bargaining strength with the Russian monopoly. We are very far from that today. The funding and the organization of a better connected European area can only be structured via a pan-continental system, very much including the UK. So on this front a much stronger Brussels lead is urgently needed.

The “less Europe” part of the argument is more controversial. It is that the EU’s detailed direction in the past—which was even more detailed than now—about how each country should decarbonize has been far too extensive and intrusive and has had very perverse consequences.

The EU requirement that all member states should plan for 27 percent of their electricity to come from renewable sources by 2030 is a clear example of this over-centralized approach to an immense variety of situations. It implies that the only path to lower carbon targets is through much more renewables investment in all member states.

But supposing much bigger strides towards a low carbon world can be achieved through other means, through major efficiency gains, through greater localization of energy production, maybe from faster switch from coal to gas (as has occurred with spectacular results in the USA), or through commercial methods for burning fossil fuels whilst sequestrating the carbon dioxide, or a dozen other new technologies?

Supposing the heavy central direction regarding renewable energies is just not the best or least costly pathway towards fighting climate cheap accutane uk change in Europe? And just suppose that far from leading to a happy combination of affordable energy, reliable power supplies and lower carbon progress, it is doing the opposite.

Indeed, one could point to the German situation as the classic example of the EU approach leading to highly perverse results. Here we see how attempts to meet low carbon targets by a massive commitment to renewable energy sources have led instead to more lignite being burnt on large scales and more coal stations being built, while gas turbine plants have actually been closed, the very opposite of which of what was intended.

It is a classic example of good intentions paving the way to we know where. Indeed, the latest figures for CO2 show that German CO2 is actually rising again after all its efforts. That is a special situation, I know, because Mrs Merkel decided to close down nuclear power, which would have been one of the contributions to a low-carbon future for Germany.

But that is the point. Almost every European country is ‘a special situation’. Targets which are too prescriptive are bound to produce reverse results.

The UK has done somewhat better, although at a much bigger cost than some of the optimists forecast when they said that energy transformation would be quite cheap. It will not be quite cheap: it is proving and will prove expensive. It has also raised the shadow of power shortages and narrow safety margins, as is mentioned by almost every newspaper every day. And as for the objective of reducing CO2, while on the production front the UK has done rather well and there has been a significant reduction of CO2, this excludes all the leakage effect of the carbon that is included in our vast import and consumption-based emissions.

By that measure the UK’s contribution to carbon reduction –and therefore to fighting climate change, may be little or nothing – or even negative. And all at the cost of bringing our power supply reliability into a real danger zone.

It all seems a heavy price to pay for such outcomes. A new kind of EU energy policy framework is urgently required – and one that not only allows for far greater flexibility as between member states, but one which actually produces positive results.

The article was first published on 19 June 2016