My Lords, as another former Secretary of State for Energy—there are plenty of them around—I want to come down from the rhetorical heights that we have just experienced and congratulate my noble friend on her new appointment. It will be very challenging because there are many changes ahead. Some of them are not yet foreseen because of the pace of technology, which will transform a great deal of what we are talking about today.

I declare interests as in the register. I also declare that I come to this whole issue as one far from convinced that we are doing anything like enough to protect the next generation. My criticism is made not with a grand vision that there is a serious climate change challenge for this whole planet but that our policies are not nearly effective enough and, in many areas, are counterproductive in meeting that challenge.

I, along with my noble friends, cannot resist using this as an opportunity for a short requiem for the Department of Energy and Climate Change. I never thought that it was a good idea. It was based on a flawed belief in certain branches of politics that policy and theory are more powerful than technology and market forces. Of course, they are not, as has been proved again and again.

I have a few questions. It is a quiet and empty House at this point in the evening but in fact we are presiding over issues concerning billions and billions of pounds. It is often the way that the really expensive matters get the least attention.

In the carbon budget now proposed for the five-year period from 2028 to 2032, we are planning, on the recommendation of my noble friend who has just spoken and the Committee on Climate Change, a reduced total  of 1,725 million tonnes in carbon emissions over the five years , which is about 345 million tonnes a year. That is out of an estimated worldwide annual emission level—in as far as you can measure these things—in about 12 years from now of 40 billion to 45 billion metric tonnes. Therefore, if you can rely on these measures, the contribution that we are making to carbon emissions is rather less than 1/100th of that total, and of course that excludes consumption-based emissions and import-based emissions, as my noble friend Lord Lawson rightly pointed out.

The reality is that our hundredth is up against the 40 billion or 45 billion tonnes of emissions that will be going into the atmosphere at that time, with 70% to 75% of them coming from China, the US, Russia, India and Japan. They are the big ones and the rest of us are trying to do our bit. Therefore, the bigger question behind all this is: if we are serious about global CO2 reductions and about climate change, rather than merely stating that we think we are doing our bit and that is it, and if we are really serious about meeting the challenge for the next generation, what are we doing about attempting to work with those nations to see that they turn the pace of their advance in technology towards reducing carbon emissions? The decision on whether climate change is grappled with and severely contained or whether it is undermined by a colossal increase in emissions will be made not in this country or even in Europe but in those countries.

All around us we can see danger zones: the vast growth in India of coal-fired power stations and vast growth in China, although that has been curbed a bit and the Chinese are using good place to buy accutane online high-quality coal. The Indians are trying to use supercritical boilers to increase the amount of electricity they can get out of a tonne of coal. They are much criticised for doing so but that is the way they are going. My main question is: what is our underlying strategy for meeting the real climate change issues and the real curbing of CO2, rather than just dealing with our own local affairs?

I now turn to the cost of it all. The Explanatory Memorandum for the Carbon Budget Order slightly disingenuously says that there is not a cost. The impact assessment says that it is nought. It goes on to say that the cost is not in the carbon budget but in how it is delivered—that is what influences prices and costs—and, in turn, that is determined by energy efficiency, energy prices and technology. The impact assessment, as opposed to the Explanatory Memorandum, rather ruefully admits that at the end of it all it could cost minus £5 billion if everything goes wonderfully but up to £9 billion if everything does not go so well. These of course are guesstimate figures of a high order. 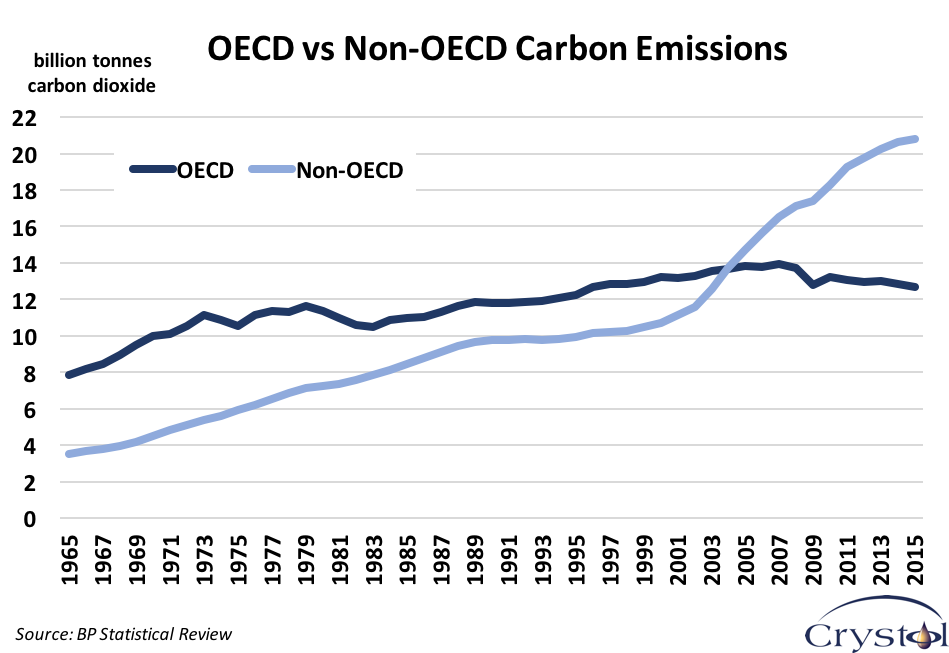 Secondly, there is the crucial question that my noble friend Lord Ridley raised with the eloquence and precision he has in all his contributions. The impact statement reminds us that the Act requires the Government to publish policies and proposals soonest on how we achieve these carbon budgets. That prompts the question again and again, which never gets a very good answer: are we going much faster than the others? The Act requires account to be taken of the circumstances at European and international level. That is aside from whether or not we are in the European Union. A great many energy issues and co-operation with the continent can of course continue regardless of whether we are signed up to the EU treaties, and they probably will. We get a lot of our electricity daily and we will get more—up to 18 gigawatts through the interconnectors from continental Europe and from Norway. We are linked technologically with Europe whether we leave the EU or not.

Can my noble friend tell us exactly how detailed was the account taken in formulating these budgets—perhaps he can get advice from the Committee on Climate Change, chaired by my noble friend—and how it then explains our devastating domestic energy prices in Britain? They are now, as my noble friend Lord Ridley reminded us in an excellent Times article, 21% higher than the median or average, and our industrial prices are 43% higher than the average. How can we explain that?

Were we able to explain at the time of the closure of Redcar steelworks why our energy costs for steel were 40% above German costs? What is the explanation? Were these matters taken into account? We really are entitled to know how much account was taken of these extraordinary disparities, which give us a higher industrial energy price than any of our neighbours and competitors, let alone of course the great new competitors of Asia, Africa and Latin America. Why are our domestic prices higher than those in continental Europe, with the resulting suffering and difficulty that occurs—whatever my noble friend who spoke earlier says—when people have to go to food banks and face the agonising choice between heating and eating? These are real problems and we need assurances that they are properly addressed before we just tick the boxes and see a huge new impasse develop in areas where we ought to be helping people and not hindering them.