Iraqi oil dilemma: to freeze or not to freeze

In recent years, the international community has focused on the North American shale industry and its impact on the Organization of Petroleum Exporting Countries (OPEC), particularly Saudi Arabia. The United States led the growth in global oil supply in 2015, thanks to shale oil’s unexpected resilience in the face of lower prices. OPEC continues to stick to its position that it will not cut production. However, Saudi Arabia announced earlier this year that it was ready to freeze its production if other OPEC members follow suit. At the center of these developments, one country stands out: Iraq. 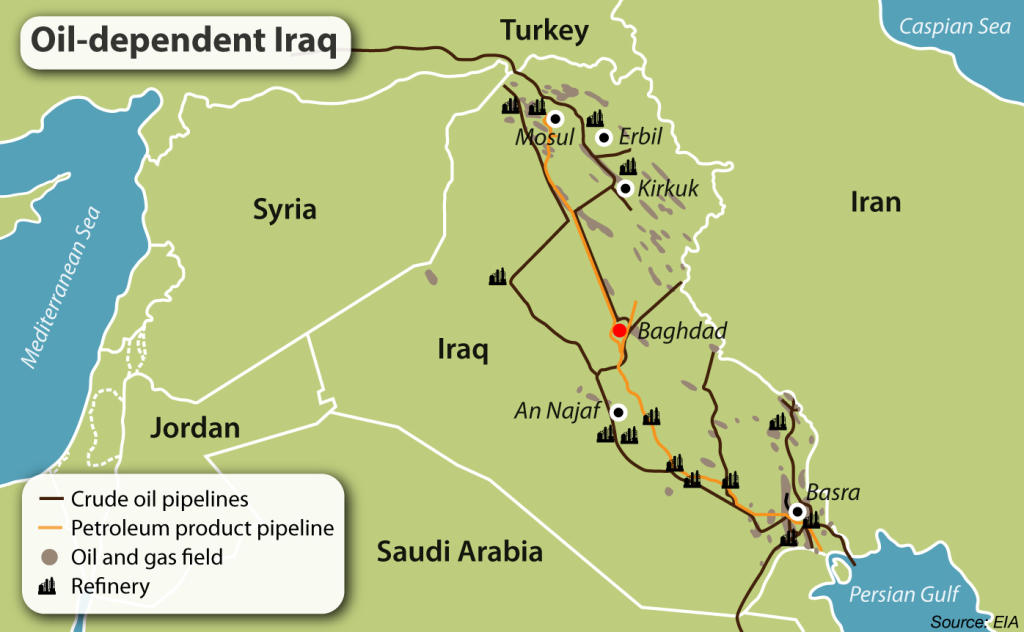 Iraq is OPEC’s second largest producer after Saudi Arabia and was the second biggest contributor to the rise in global oil supplies in 2015. The remarkable increases in Iraqi production have surprised many. If the trend continues, Iraq could capture market share from other OPEC members. The question now is whether the country will sustain its higher production, or join other OPEC members if they decide on an output freeze.

In 2015, Iraq set a new record by pumping nearly 4 million barrels of crude oil per day (Mb/d), including production from the Kurdistan Region in the country’s north. That level exceeded the country’s previous peak of 3.5Mb/d, which was achieved in 1979, before the Iran-Iraq war.

What is equally impressive is the rapid rise in production since 2011, and especially between 2014 and 2015, when output jumped by almost 700,000 barrels per day – more than the total production of Egypt or Malaysia.

The increase came mostly from the oil fields in Iraq’s south, which holds 75 percent of the country’s total proven reserves. Rights to develop some of these fields were awarded to international oil companies in two tenders, in 2009 and 2010. Output rose by a total of nearly 1.5Mb/d between 2010 and 2015, clearly showing the contribution that international firms can make to a country’s oil sector. 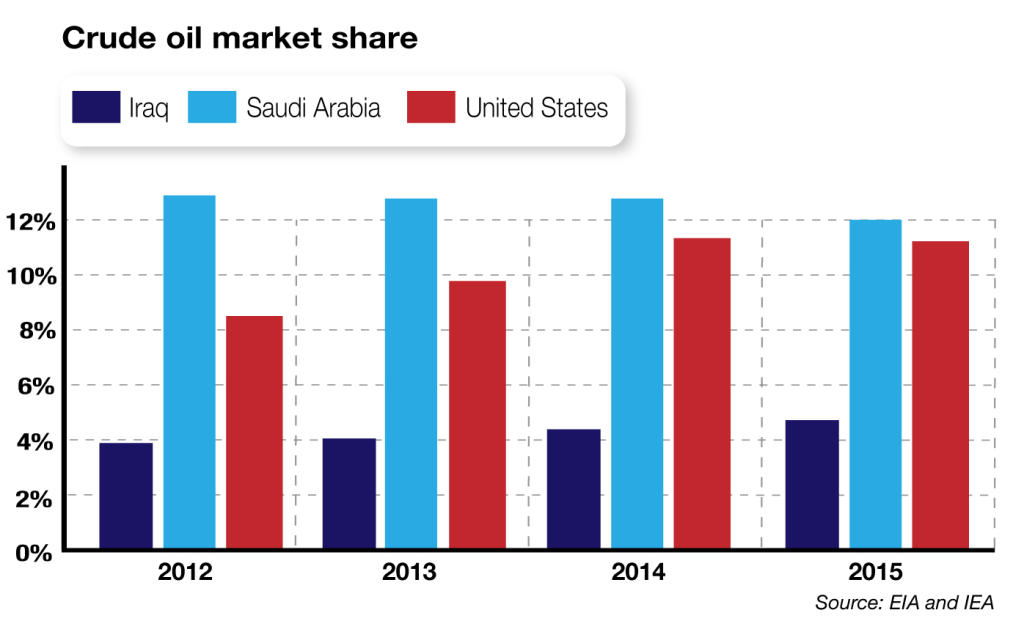 One possible explanation of this production surge is the way that service contracts have been designed. Investors were awarded these contracts based on two main criteria: the target plateau production rate set by the bidders and the remuneration per barrel produced – or service fee – they expected from the government. The maximum fee agreed during the first two tenders was $2 per barrel, irrespective of the oil price. Payment starts once a production target is achieved, typically 10 percent above the level of output before the contract was awarded.

The government also reimburses costs, but only once the production target is reached. Moreover, companies cannot fully recover their costs in any one period; reimbursement is limited to 50 percent of the value of production over a mutually agreed baseline. If output falls below target, investors may have to wait longer to recover all their costs; higher production means they can recover their costs quicker.

From the standpoint of the Iraqi authorities, such contracts are a mixed blessing. On one hand, they give the state more than 90 percent of a project’s value. On the other hand, they leave the government fully exposed to oil price fluctuations. This poses special risks for Iraq. With the oil sector providing more than 90 percent of government revenues, the country’s dependence on the industry is among the highest in the region.

Iraq’s Ministry of Oil has reportedly asked companies to cut back spending this year in an attempt to ease the burden of cost reimbursement on the state budget. Public finances are suffering due to the decline in oil prices and rising spending, especially on the military. Production targets have also been revised downward for some contracts, while others continue to be renegotiated. This is likely to halt the country’s rapid expansion of production in the longer term.

Few countries can compete with Iraq in terms of reserves and production costs. With 150 billion barrels of proven oil reserves, the country ranks fifth in the world after Venezuela, Saudi Arabia, Canada and Iran, according to the BP Statistical Review of World Energy. It also ranks third lowest in terms of production costs at $10.50 per barrel, behind Kuwait ($8.50) and Saudi Arabia ($9.90), according to research and consulting firm Rystad Energy.

From an investor’s perspective, these advantages must be weighed against some counterbalancing factors. Since the reopening of the oil sector in the post-Saddam era, several obstacles have emerged. These include relatively tough contractual arrangements, cumbersome bureaucracy and a slow approval process, as well as a tangled web of political, social, religious and security issues.

The security situation worsened with the appearance of Daesh (also known as Islamic State), which remains active in the northern parts of the country. Security risks have increased the cost of doing business and strained the state budget, which should you buy accutane online must now finance an army offensive to eject Daesh from the Euphrates Valley and Mosul. Falling oil prices have exacerbated the situation.

Iraq cannot ignore the reemergence of Iran – another major oil producer at its doorstep. According to the International Energy Agency (IEA), these two countries will lead output growth among OPEC countries for the rest of the decade.

While it remains to be seen how quickly Iran can increase production, two developments should be noted. Firstly, Iran has announced that it would offer potential investors contracts that are more competitive than those used by its neighbors. If it does, Iraq may come under pressure to revisit its own contract terms.

Secondly, since 2011, Iranian and Iraqi production levels have been on opposite trajectories. Iraq was the gainer between 2011 and 2015, when it picked up most of the business Iran’s energy sector lost due to international sanctions. In fact, during this period, Iraq’s oil production exceeded Iran’s for the first time in almost two decades.

This year, however, Iran’s production has started to rise just as Iraq’s began to fall because of disruptions in the northern areas. In a noteworthy coincidence, Iranian oil production increased by 220,000 barrels per day in February 2016, while Iraq’s daily output dropped by 210,000 barrels during the same month, according to the IEA. 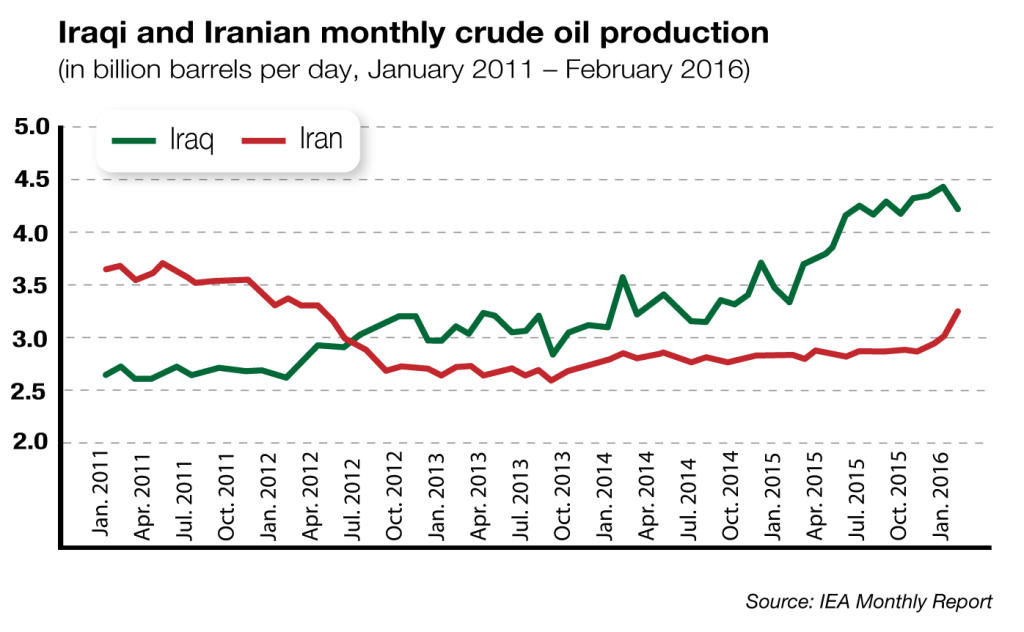 Iraq has sent noncommittal messages, saying it was ready to sign on, but only if OPEC reaches a “complete agreement,” referring to the need for all member countries to come on board. Meanwhile, Iran announced it would not consider any freeze before production reaches its pre-sanctions level.

If Iraq decides to commit, it would freeze output at 4.38Mb/d, the level reached in January 2016. That would mean halting further declines and restoring existing capacity. Iraq’s oil production fell to 4.22Mb/d in February. In principle, going back to 4.38Mb/d should not be a difficult task.

It is unclear, however, how freezing production will affect the oil companies and their potential income. Although the contracts have not been disclosed publicly, it is believed that they contain penalties if the agreed-upon production targets are not met. If the government now asks firms to revise output targets downwards, the question is whether the authorities will waive penalties or offer companies compensation.

A freeze would also affect future production levels. Back in 2009-2010, Iraqi officials wanted to reach 12 Mb/d by the end of this decade – a highly ambitious figure that was later scaled back to a more sober 5.5 Mb/d to 6 Mb/d. In its 2015 World Energy Outlook, the IEA estimates that it will take Iraq even longer to reach that target, and instead forecasts production of 5.7 Mb/d in 2025 and 6.4 Mb/d by 2030.

Six years ago, Iraq was adamant about expanding its share of the global oil market. Hussain al-Shahristani, Iraq’s energy minister at the time, stated repeatedly that his country would consider abiding by OPEC quotas only when its crude production reached 4Mb/d. Any talk of a specific limit before then would be premature, he said.

Iraq now has to weigh its objectives for market share against the risk that oil prices may fail to rebound if it does not join the production freeze. It will also have to consider the possibility that some countries may fail to keep their promises to hold output steady.

The article was first published on 14 April 2016