The long road ahead for electric vehicles

Electric vehicles (EVs) are the world’s latest craze. The internet has been inundated with news and information about them: a Google search returns more than 30 million hits. Leading media run EV-related articles daily, and sometimes two or three within a 24-hour span.

The debate about what comes next for EVs tends to be polarized: they are either dismissed out of hand or hailed as sounding the death knell of the internal combustion engine. Their future, as far as can be sensibly projected, lies somewhere in between. Basic economics will have the biggest say.

The gasoline-powered internal combustion engine has dominated global transport since its inception more than a century ago. Its superiority has stemmed from its ability to burn fuel inside the engine; the combustion process produces a large quantity of heat, which is converted into mechanical energy. With external combustion engines, the heat transfer is very slow. Furthermore, non-oil products have lower energy density, containing a fraction of the heat energy per unit of volume that oil does. Such fuels therefore require a greater amount of onboard storage than a gasoline- or diesel-powered vehicle to cover the same distance.

No wonder oil has preserved its dominance in the transport sector. Despite suffering a long-term decline in total energy market share since its peak in 1973, oil has expanded its share in the transport market. That safeguarded niche, however, is coming under attack. Since the modern EV gradually took off in 2010-2011, its rise appears unstoppable. 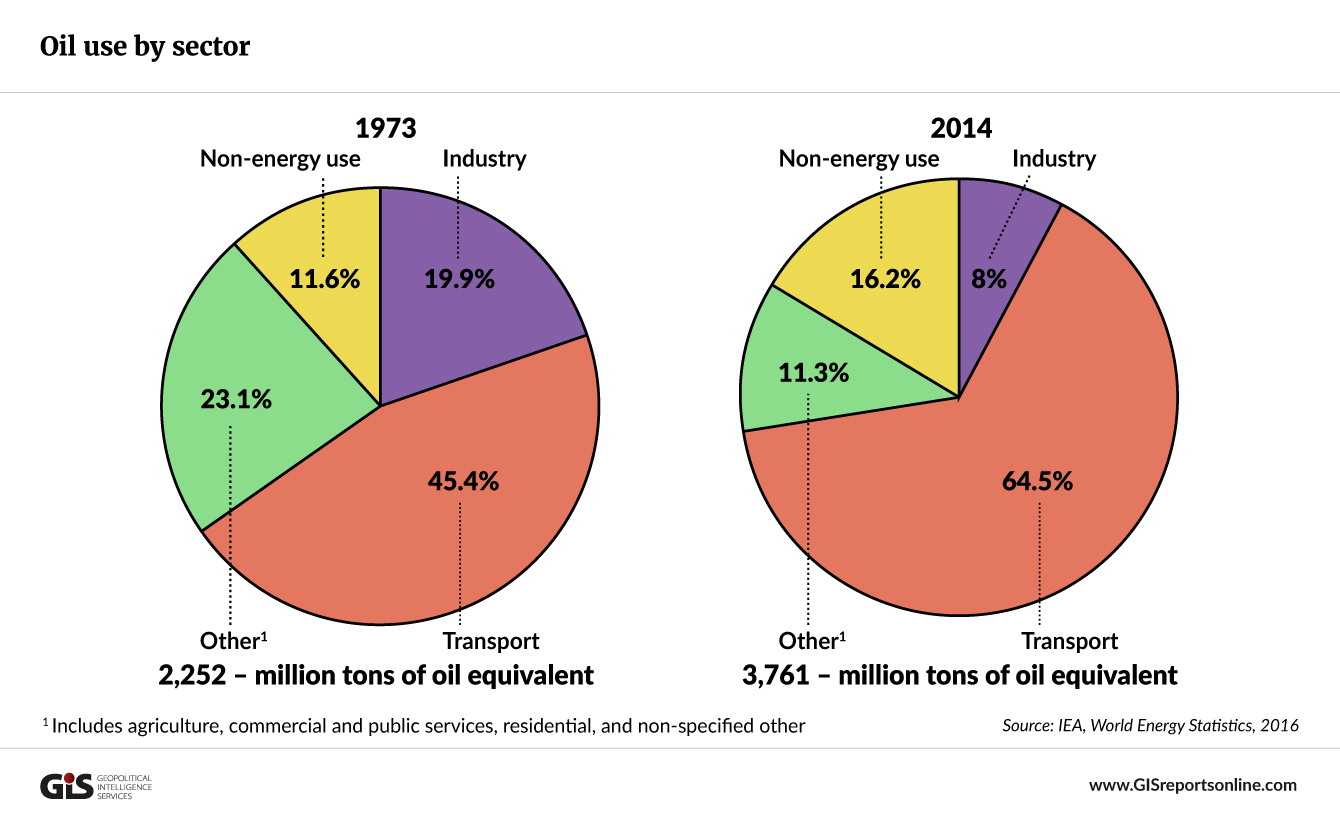 An EV’s motor is powered by the electricity stored in a battery. Since the process is combustion-free, there is no exhaust. As put by Volvo CEO Hakan Samuelsson following the company’s decision to produce only partially or completely electric cars from 2019 onward: “This announcement marks the end of the solely combustion engine-powered car.”

According to the International Energy Agency (IEA), the number of EVs globally exceeded two million in 2016. The figure crossed the one-million threshold in 2015, after having been close to zero only a few years before. More than 750,000 EVs were sold worldwide in 2016, with Norway leading the way in expanding the share of EVs in total car sales.

These figures include battery electric vehicles (BEVs), such as the Tesla Model S, which runs exclusively on electricity via onboard batteries charged by plugging them into an outlet or charging station, as well as plug-in hybrid electric vehicles (PHEVs) like the Chevy Volt, which has both an electric motor and a conventional engine, rather like hybrid cars. The difference, however, is that a hybrid car’s battery is charged through the kinetic energy dissipated by the brakes, not by plugging into an outlet or station. 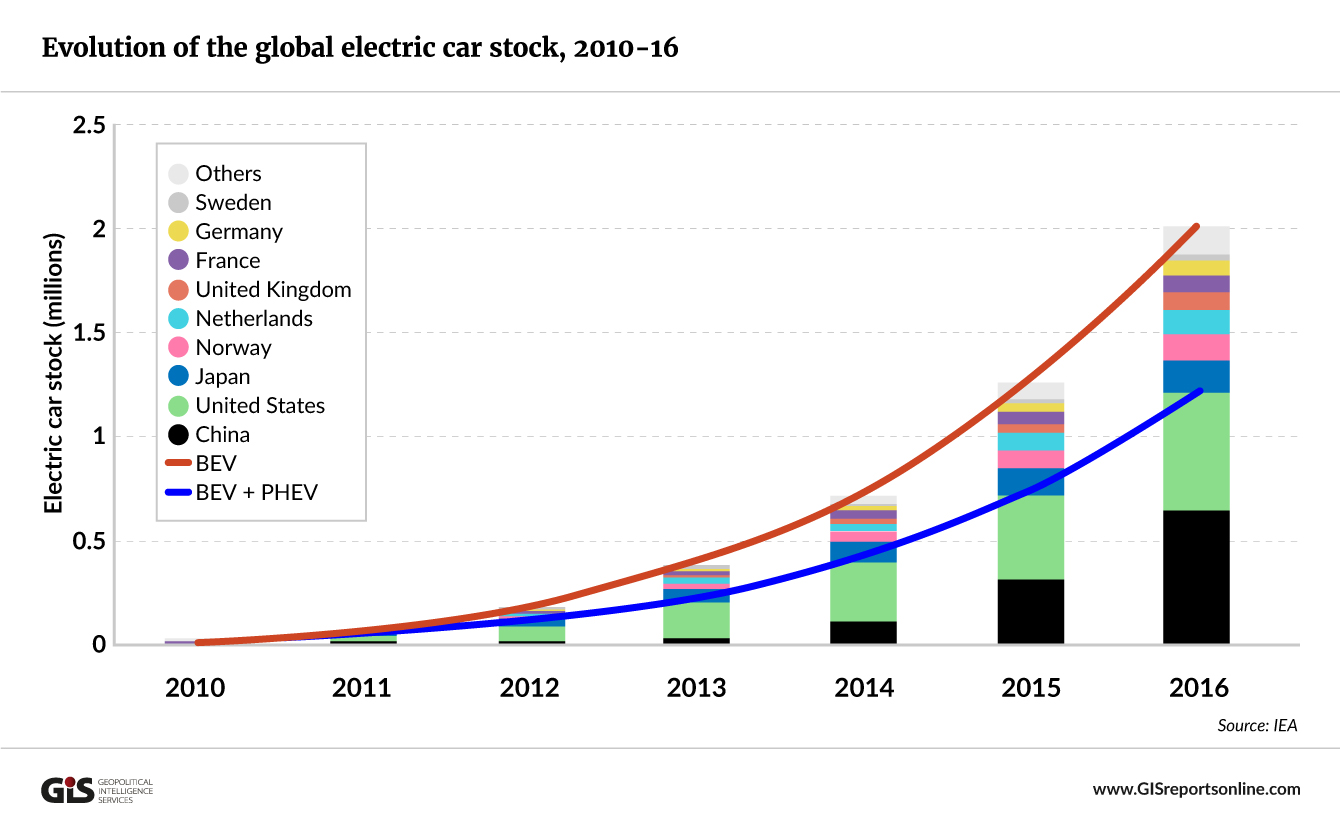 While the rapid increase of EVs is impressive, the numbers should be put into perspective. Overall car sales reached a record high of 94 million in 2016 on rising global incomes, with China being the largest market. Moreover, the number of cars on the road around the world is more than one billion and is expected to reach 1.8 billion by 2035.

In this respect, EVs are starting from a very low base; their sales still represent less than 1 percent of total car purchases. Also, the rate of growth in electric car stock has slowed to 60 percent in 2016 from 77 percent in 2015 and 84 percent in 2014. 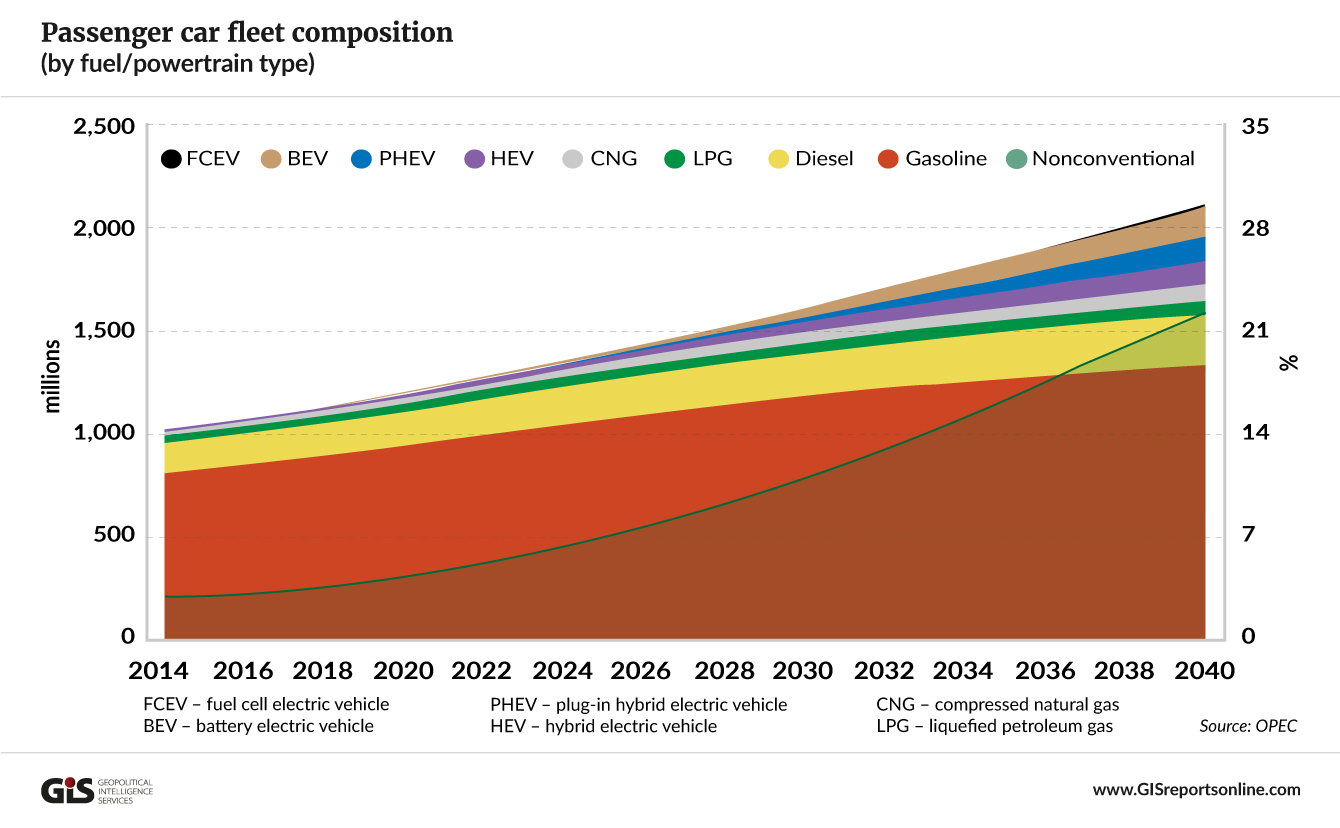 The power of efficiency

So it would be hard to see how the oil-fueled engine can be displaced anytime soon. Airplanes, cars, trucks and ships still rely overwhelmingly on oil-based fuel. The IEA sensibly concludes that “EVs still have a long way to go before reaching deployment scales capable of making a significant dent in the development of global oil demand and greenhouse gas (GHG) emissions.”

Combined with other changes, however, such as improving fuel efficiency in conventional vehicles, EVs are helping to put downward pressure on oil demand.

Oil giant BP expects the number of EVs to increase to around 100 million by 2035 (6 percent of the global fleet). Still, such a rapid expansion will reduce the growth in oil demand by just 1.2 million barrels per day (mb/d) – currently global oil demand is around 98 mb/d. In contrast, improvements in fuel efficiency will reduce oil-demand growth by a staggering 17 mb/d – 14 times more than EVs.

Today, a typical car’s fuel efficiency is rather meager, varying between 20 and 40 percent and leaving plenty of room for improvement. Such figures highlight the importance of transport performance and emission standards regulations, as well as healthy competition to encourage continual improvements. 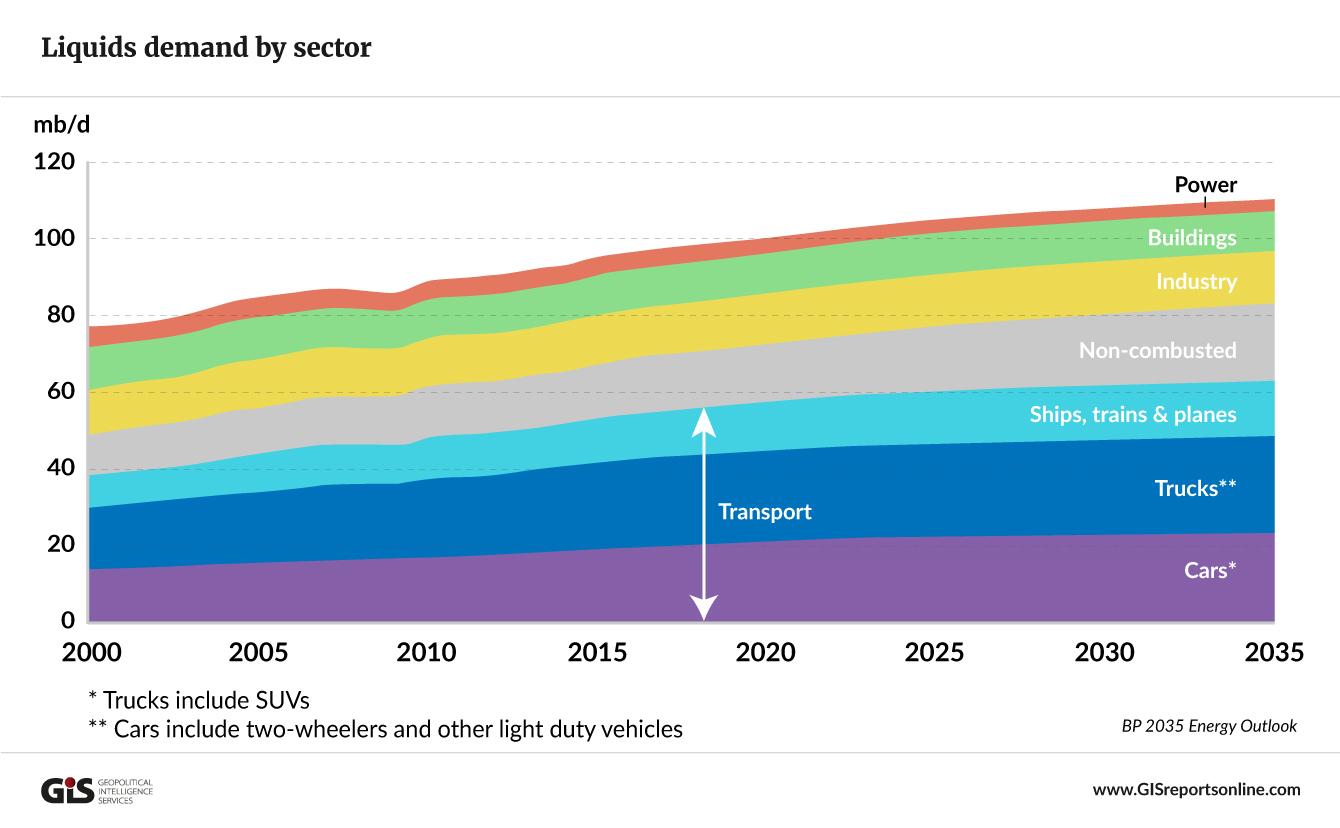 Of course, predictions – especially those that go beyond a 10-year horizon – are fraught with uncertainty. Technology, particularly battery technology, could make surprising advances. Currently, one of the main shortcomings of EVs is their limited battery range and high cost.

New EV-friendly government policies can act as an additional catalyst. EVs already benefit from government programs that encourage consumers to purchase them. For instance, in the United Kingdom there is the “Plug-in Grant,” which is a subsidy of up to GBP 4,500 deducted from the purchase price of an EV, in addition to various exemptions from taxes and charges.

Bold targets can also be set. The UK joined France’s plans to ban sales of petrol and diesel engines by 2040. But experience shows that targets, official strategies and good intentions at the governmental level are not enough, especially if they come with a high price tag.

One of the attractions of the petrol-based internal combustion engine is the fuel tax, a long-established tradition, especially in the developed world. In the UK, fuel duties alone account for about 4 percent (GBP 27.6 billion) of the total government tax receipts of some GBP 690 billion (at 2017-2018 forecasts). In Norway, tax revenue from petroleum activities reached more than $5.2 billion in 2016. Retiring the internal combustion engine age and thereby eliminating the core business of oil companies will leave a sizable hole in many governments’ budgets. Greener alternatives are unlikely to fill the gap, especially since they are still heavily reliant on subsidies.

Another issue to consider is the increasing demand for minerals and metals to meet renewable-energy and battery requirements. This demand has huge environmental and economic consequences that tend to be overlooked in the current debate.

The World Bank estimates that the continuing boom in low-carbon energy technologies needed to keep the global average temperature rise at or below 2 degrees Celsius will significantly increase demand for minerals and metals. “The most significant example is electric storage batteries, where the rise in relevant metals: aluminum, cobalt, iron, lead, lithium, manganese, and nickel – grow in demand from a relatively modest level under 4 degrees Celsius to more than 1,000 percent under 2 degrees Celsius,” the bank says.

In addition to boosting mining activities, which have their own environmental footprints, the so-called “resource curse” is amplified in states where those minerals are plentiful – particularly in developing countries with weak institutions. Resource-rich countries often grow more slowly than countries that are resource-poor.

Another dimension that has yet to be fully examined is the carbon emissions cycle of manufacturing an EV, including the batteries. Some preliminary studies indicate that the production of batteries is far from carbon-dioxide neutral, at least partially cancelling out the climate benefits of electric propulsion.

The fight against climate change has shown that there are no instant solutions or magic bullets, let alone any that are easy or cheap. In the transport sector, this is particularly true.

Through the years, people have tested different alternatives. EVs use a technology that predates the conventional car: Scottish inventor Robert Anderson is believed to have invented the first electric carriage powered by non-rechargeable primary cells in 1832. Henry Ford designed a car which ran solely on ethanol in the 1880s. In 1908, he built the first flex-fuel vehicle, which could operate on either ethanol or gasoline; as oil was widely available and cheap, the choice fell on the latter. Then came the hybrid cars that took the last decade by storm.

In 2012, the UK government launched the UK H2Mobility Project, aiming to enable the commercial deployment of hydrogen fuel cell electric vehicles (FCEVs) in the country from 2015. Then there are the natural gas vehicles (NGV), which for a time experienced double-digit growth, but whose widespread use has remained confined to a few countries.

Forty years ago, in an article entitled “Zapmobile” from the July/August 1977 issue of Technology Review, the authors argued that the electric car was “inevitable” as oil resources dwindled, and that EVs would become an acceptable alternative as a commuting vehicle within a few years. None of those predictions materialized. On the contrary, today proven oil reserves are at their highest ever, with prices struggling to reach $60 per barrel. This heightens the challenge faced by the competition.

Under current trends, it is an easy bet that EVs are here to stay. On their own, however, they need much more than (unsustainable) government subsidies to cause a serious disruption in the transport sector. They need to become a viable commercial alternative without government financial backing, which can be cut unexpectedly at any time.