There is no shortage of news in the media about the negative impact of lower oil prices on the economies of the major Middle East and North Africa region (MENA) oil producers. The dependence on oil makes these economies vulnerable to fluctuations in oil price. But while the oil price is back to ‘normal’, it is not going to be business as usual for these countries.

The oil price has returned to normality: greater price volatility in a lower price environment compared with 2011 to mid-2014. For the major Middle East and North Africa region (MENA) oil exporters, however, it is not business as usual. The most obvious impact of lower oil prices on net oil exporters is deterioration in external accounts. The loss of export revenues will translate into shrinking fiscal revenues because oil export revenues are captured almost entirely by governments, therefore resulting in large budget deficits. If one adds the stronger US dollar, the outcome is even more dramatic. Most OPEC producers will suffer because they also have fixed exchange rates. Capital spending is also likely to suffer given the political sensitivity attached to consumption, which has increased in recent years in response to rising social pressures. Reforming local economies has acquired a greater sense of urgency not because oil prices are simply lower, but because there is a new dynamic shaping both the global oil market and politics: The geopolitical risk will continue to be present but the difference today is that it can be better accommodated.

THE FACT that the world has seen the price of oil drop by around 50 per cent since 2014 is not without precedent. It also reflects ‘back to normality’ for a global commodity. For the major oil exporters of the Middle East and North Africa (MENA), however, it is not business as usual.

There is now a consensus that the prevailing stability of the oil price at an unusual record high of around US$100 per barrel, between 2011 and 2014 was simply abnormal and it was just a question of time before the oil market re-adjusted.

In the long term, a US$60 per barrel oil price is not too bad; after all it was much lower for many years (as in the 1990s and the first half of the 21st century).

Experience shows that predicting the oil price is not easy. The Energy Information Administration (EIA)’s three-case scenarios of US$75, US$141 and US$204 per barrel (in 2012 terms) by 2040 – under the low, reference, and high cases – reflect the wide divergence in expectations.

What can be expected, however, is greater price volatility and at lower levels compared with the last three to four years. 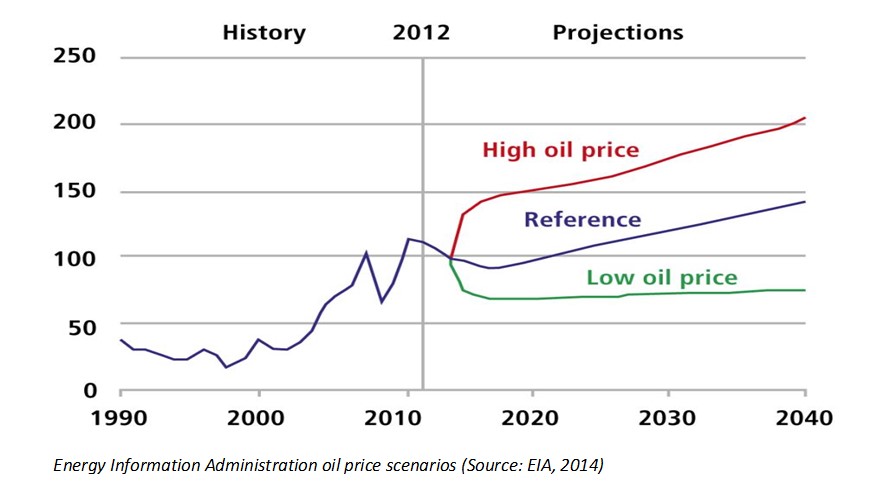 The most obvious impact of lower oil prices on net oil exporters is deterioration in external accounts. The impact on the wider economy, however, varies with that economy’s level of dependence on the oil sector. In the Arab world, where oil accounts for more than half of budget revenues and exports earnings, the economies could be hurt, according to the World Bank (2015).

The outcome is even more dramatic if one adds the stronger US Dollar (USD) to the existing trend of lower oil prices.

Most OPEC producers will suffer because they also have fixed exchange rates – i.e. their currencies appreciate together with the USD. These countries, like Saudi Arabia, will not only get less dollar revenues – because of lower oil prices – they also have to translate them into less domestic currency when they plan their domestic expenditures.

It is argued that most oil exporters need oil prices to be considerably above US$60 to balance their budgets – what is called budget breakeven oil price – but such prices should be treated with caution; after all, budgets can be amended. The question is where will the axe fall: Domestic consumption or investment?

The wisest option would be to reduce consumption, including reforming overly generous and inefficient energy subsidies. Lower oil prices can therefore be an opportunity to reform local economies and achieve a stable, not spasmodic, growth. Identifying additional sources of non-oil revenue would also support efforts to contain spending, but this is unlikely because of limited economic diversification.

Both reforming energy subsidies and diversifying the economy have been advocated by experts and international organisations for many years. Economic diversification, in particular, has been discussed since the 1970s as the way forward for MENA economies. Little progress has been made since. As Ali Aissaoui from the Arab Petroleum Investments Corporation (APICORP) said, ‘Political expediency has taken prominence over economic efficiency, thus slowing down the momentum of governments’ economic diversification agendas.’

It is more buy accutane in usa likely that capital spending will be reduced instead – simply because of the political sensitivity attached to consumption which has increased in recent years in response to rising social pressures. For instance, in May 2015, Saudi Arabia’s King Salman gave the entire military and security forces a bonus of one-month’s pay, their second since he came to the throne in January, costing his treasury more than US$30 billion.

Of course, net oil exporters are not all in the same position and distinction should be made between those who managed their wealth better than the others. Most of the GCC countries have accumulated financial reserves, through sovereign wealth funds (e.g. Kuwait and United Arab Emirates) or simply foreign account reserves at the Central Bank (e.g. Saudi Arabia). These countries can draw down their financial buffers to sustain their economies; they also have good credit ratings to raise more money. This pattern, however, is not sustainable in the long term.

Reforming local economies has acquired a greater sense of urgency not because oil prices are lower, but because there is a new dynamic shaping both the global oil market and politics.

The geopolitical risk will continue to be present but the difference today is that it can be better accommodated.

Only a few years ago, political problems in the Middle East would have sent the oil prices soaring. Today, political instability is translating into supply disruptions in the region – see Yemen, Syria, Libya – but no spikes in the oil price have been recorded.

Because of the new-found strength in US oil production, the global economy seems to be able to cope better with oil supply problems. In 1979, for instance, when the Iranian revolution led to a loss of two million barrels a day (Mb/d) oil prices increased by 125 per cent.

Today, we are talking about supply disruptions of almost three Mb/d, with those disruptions concentrated in Libya (1.3 Mb/d) and Iran (860 Kb/d), according to BP Statistical Review of World Energy (2015). Still the oil price remained relatively low.

In terms of the future development of the global oil market, US shale production is perhaps the biggest unknown; it has so far remained unabated and more importantly it is flexible. According to the BP Statistical Review of World Energy (2015), the US overtook Saudi Arabia and Russia to become the world’s largest oil producer.

It is not surprising to see the IMF recommending oil exporters to treat the oil price decline as largely permanent – a belief echoed by several industry experts and leaders.

Some of the region’s countries have already started to take policy actions. In Algeria, for instance, public sector hiring has been frozen. Oman’s 2015 budget includes reduced defence spending. The Bahraini Authorities announced an increase of 11 per cent in natural gas prices for industrial users. These are positive steps but a lot more remains to be done.

There is a debate as to whether lower oil prices may actually decrease instead of increase tensions in the Middle East.

The argument is that everyone will be forced to focus their attention on streamlining economic management, leaving less space for military adventures, especially around Saudi and Iran.

The threat to the oil exporting countries in the MENA is not just exogenous. Norway is an important oil producer and exporter yet its economic performance is not at the mercy of movements in oil price.

Serious economic revamping and dedication to implementation is needed for MENA’s economies to join the league of modern states, which require efficiency in their governance and administration, a diverse spread of economic and industrial activity, efficient and sustainable methods of raising revenue and comprehensive policies of public expenditure and provision of public services. This is the recipe for economic stability and prosperity.

Procrastinating will simply lead to further shrinkage and social unrest.

This is the opposite of what the region needs to meet tomorrow’s challenges – or indeed today’s.

PrevPreviousG7 in Bavaria: A Fairy-tale Summit
NextAccess for Women in Energy Newsletter – Jul 2015Next