Technology exporters are the biggest beneficiaries of nuclear power

The club of nuclear power producers consists of 30 countries, but this number could more than double if projects currently planned worldwide are implemented. According to World Nuclear Association data, more than 45 countries are actively considering new nuclear power programs. However, the list of potential industry newcomers includes many unlikely candidates.

Among them are some of the poorest countries in the world, including Bangladesh, Senegal and Uganda, with limited financial capacity to undertake such a major investment. Many countries lack the institutions and necessary expertise to safely manage nuclear power plants. And in some cases, the candidates’ domestic markets or grid sizes are not large enough to justify the commitment.

This raises questions about the rationale behind these plans. Nuclear power seems attractive to countries with limited project finance and implementation capacity because exporters of nuclear technologies sweeten their offers, for example by providing otherwise unavailable project financing. These exporting countries and companies have goals that go well beyond any given nuclear power plant project.

Several arguments are usually made to contend that generating electricity by operating a nuclear power plant is superior to other sources of energy. One runs in terms of climate change. As much as 99 percent of all CO2 emissions created by energy consumption are caused by burning fossil fuels. Active nuclear power plants, like renewable energy facilities, emit virtually zero CO2. Unlike other renewables, however, they do not depend on the availability of sunshine or wind, which are intermittent.

Operational efficiency is a clear advantage of nuclear energy – and not only in comparison to other renewable sources of power generation. Nuclear power plants generate electricity at a 92 percent utilization rate (or “capacity factor”), according to the Nuclear Energy Institute, much more efficiently than all types of conventional power generation. Combined-cycle natural gas power plants have a capacity factor of 56 percent, coal-fired plants of 55 percent and wind of a mere 33 percent.

Aside from the related economies of scale, nuclear power also has a significant ability to deliver base-load electricity. In small countries such as Armenia and Slovenia, a single nuclear reactor is able to supply 30 and 37 percent of the country’s total electricity needs, respectively.

A final, often touted argument is that nuclear energy is relatively inexpensive. This, however, is the case only if one restricts the analysis to the day-to-day running of power plants and disregards investment and decommissioning costs. The so-called “operating” costs of nuclear power (including maintenance, fuel and operations) are indeed cost competitive with other sources of electricity generation, including from fossil fuels. To these low costs, the World Nuclear Association adds a lower risk of cost inflation because the feedstock (uranium) constitutes a comparatively small proportion of the overall cost. Changes in the price of uranium therefore have a relatively limited impact, compared to changes in other fossil fuel feedstocks. 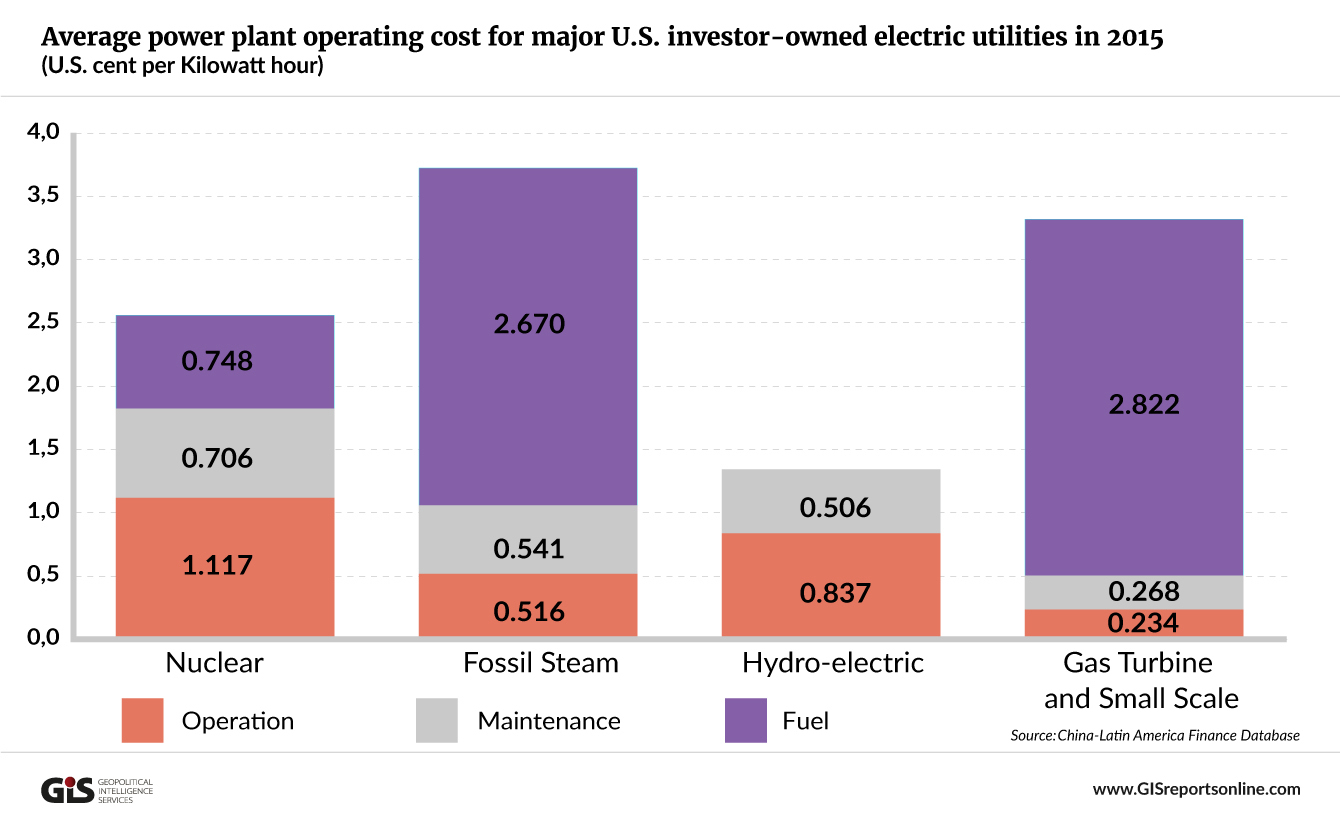 Given these advantages one should expect nuclear energy to be the world’s dominant source of electricity. Instead, the industry has been struggling to maintain growth.

The world’s first nuclear power plant was connected to the grid at Obninsk, Russia, in 1954. More than six decades later, nuclear power accounts for less than 11 percent of global electricity generation (2014) – down from a peak of nearly 18 percent in 1996, according to the International Energy Agency (IEA).

The main problem of nuclear energy was obvious long before safety became a major international concern. The problem is the full-life cycle costs of a plant, from initial investment to decommissioning. Taking all these phases into consideration, nuclear energy is an expensive proposition.

The investment costs account for such a large part of nuclear energy’s overall bill that financing on purely commercial terms is usually difficult to obtain and substantial government support is required to put projects together. Hinkley Point C, the French- and Chinese-financed nuclear power station in the United Kingdom, for example, has been the center of controversy largely because of its construction bill of 18 billion pounds ($22 billion).

To ensure the project would go ahead, the UK government has committed to guaranteeing to the investors a “strike price” of 92.50 pounds per megawatt hour (in 2012 prices and rising with inflation) for the electricity that the project will potentially generate over 35 years. The wholesale price of power in the UK will not be allowed to fall below this level, with consumers making up the difference. The UK’s National Audit Office has calculated that this subsidy may amount to 29.7 billion pounds over the lifetime of the agreement.

This is not pocket money even for the most developed nations. For weaker economies, where needs of eradicating poverty, improving education and healthcare are pronounced, investment in nuclear energy is harder to justify.

The high investment costs are aggravated by another feature of nuclear energy: it takes a long time to build a nuclear power station. The construction period can easily exceed a decade, especially with the new generation of reactors that are larger and more complex than the older ones (in return, the new models are expected to extend the life span of nuclear power plants from about 30 to 60 years). By comparison, gas- and coal-fired power plants take only two to four years to put together.

This introduces an additional financial risk. Within a decade, external factors may change dramatically, including the emergence of cheaper energy alternatives, changes in financial and economic conditions, and changes in political sentiment. Financiers will want compensation for these hazards, making projects still more expensive.

Furthermore, such long-term project horizons require secure supplies of uranium far into the future. In terms of energy security, uranium shares characteristics of oil and gas: it is a non-renewable resource concentrated in a small group of countries. Australia, Canada, Kazakhstan and Russia hold more than half of the world’s known uranium deposits. This not only offsets the pro-nuclear argument of improved energy security (as far as it relates to reducing energy imports); it again increases the risk and therefore the cost of project finance, especially in poorer countries.

Such a combination of high upfront costs and long lead times helps to explain why project financing in the nuclear industry is very often dealt with by loan guarantees from the countries which export the nuclear technology. Russia, for instance, recently offered Egypt a 13-year loan of $25 billon with a 3 percent annual interest rate to finance the construction of the El-Dabaa nuclear power plant. And this is not an isolated example.

Such assistance helps with construction costs, but not necessarily with the potential costs of a nuclear accident. These are so exorbitant that nuclear power plants are virtually uninsurable privately. If something goes wrong, the government carries the burden and costs are socialized – something poor countries can ill afford.

Major nuclear accidents are not frequent but their impact may be devastating and not confined to national borders. Smaller disturbances and mishaps are more common than large incidents, such as in Three Mile Island in 1979 in the United States, Chernobyl in 1986 in Ukraine, and Fukushima in 2011 in Japan. Last but not least, permanent disposal of nuclear waste remains a problem with no solution.

In a world increasingly unsettled by threats of terrorism and cyberattacks, nuclear power plants can be tempting targets. Poor host countries will find it difficult to attain the necessary capabilities, institutions and systems to effectively deal with these threats at all levels.

International organizations such as the International Atomic Energy Agency (IAEA) may help some, but their capacity to closely monitor a large wave of new nuclear power plants is questionable, especially at a time when almost 200 reactors operating at the end of 2013 will be retired in the period to 2040, at a cost exceeding $100 billion.

And so, the provision of safety and security may become an ancillary business of private or state-owned providers, opening a wide field of assistance to those exporting the technology.

There is little doubt that nuclear power will continue to play a role in the world’s energy mix. But how significant that role will be in the foreseeable future is uncertain. 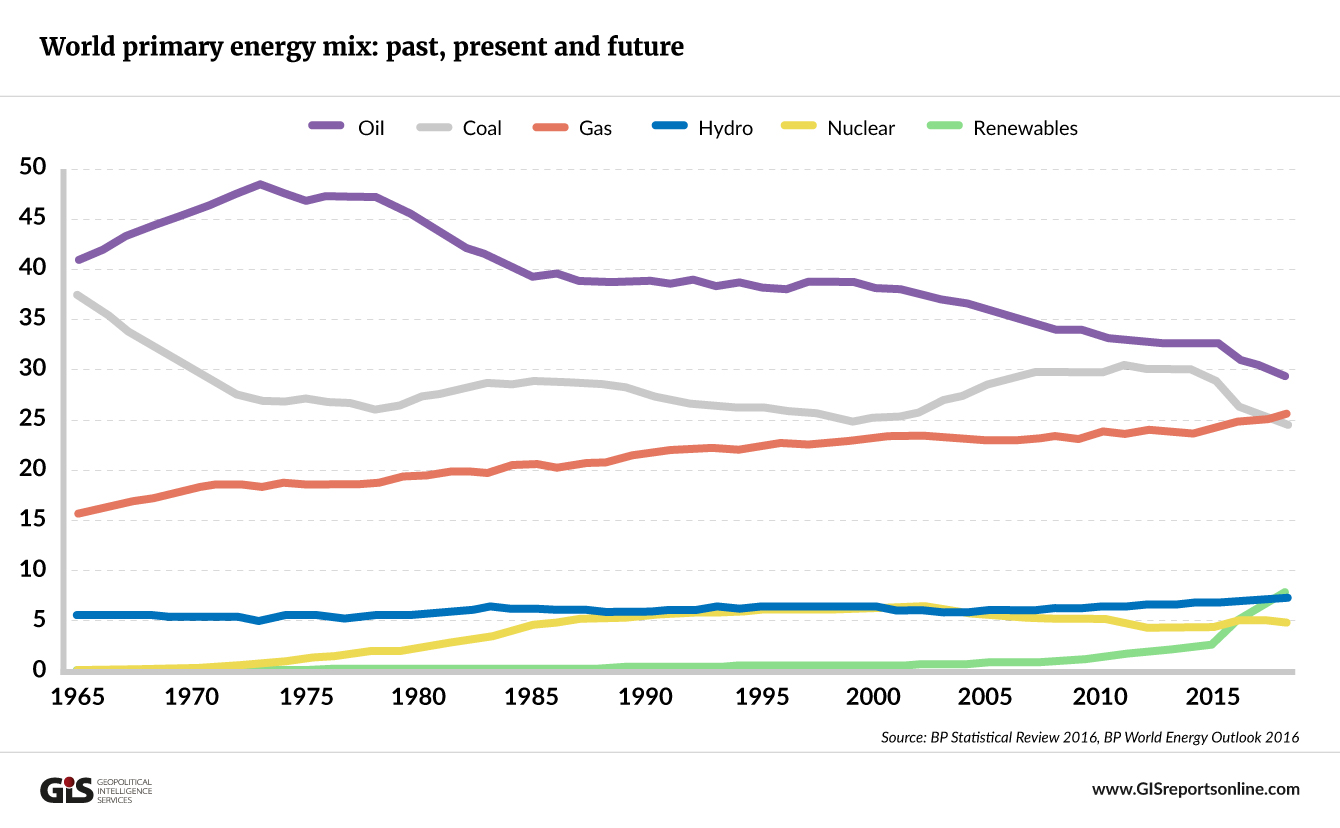 Realistically, most new nuclear power plants will likely be built in India, Russia and China. Many of the envisaged plants in poorer developing countries probably will not materialize, regardless of the fact that in numerous instances plans are being made, memoranda of understanding are signed and, often, infrastructure preparations actually have begun.

The main beneficiaries of these activities are the countries that export nuclear technology. Their gains are not confined to nuclear projects alone but also extend (sometimes indirectly) to related infrastructure and economic security issues.

The global civil nuclear market alone is valued at between $500 and $740 billion over the next 10 years. But nuclear power deals rarely are stand-alone projects. They are negotiated between governments or companies with strong sovereign backing. And usually they are part of a wider package of establishing cooperation with economic and political ties aimed at spanning decades to match the long life cycle of nuclear energy project. In this way, even if no power plant gets built, civil nuclear cooperation often triggers long-lasting economic cooperation between countries.

The benefits can be sizeable, as indicated by Russia’s Rosatom deputy director general Kirill Komarov. He claimed that for every ruble invested into supporting the sale of nuclear technology abroad, Russia’s GDP would gain two rubles. The reason, Mr. Komarov argued, is that Russian companies and their subcontractors account for the construction and infrastructure work – whether, one might add, directly in support of the nuclear project or not.