Uganda will soon be joining the league of new oil producers. The country has, over the past nine years, made a series of important oil and gas discoveries. However, the picture is mixed: Uganda is energy-resource rich, yet energy poverty is widespread throughout the country. Despite several policy reforms introduced over the last decade, institutional and legal weaknesses remain. Many challenges and opportunities lie ahead with the potential for a positive effect on East Africa.

Since 2006, Uganda has made several oil and gas discoveries. They have been described as Africa’s biggest onshore finds in 20 years. With one of the highest success rates and lowest finding costs in the world, one would expect Uganda to be a ‘hot area’ for oil activity. The entry of larger players – mainly Tullow Oil, CNOOC and Total – has been noted. The government hopes that the development of the sector will transform Uganda from a low-income into an upper middle-income country by 2040 and from a net importer to a net exporter of oil and its products with wider regional benefits. But the exploitation of the discovered resources has created controversy. Experts are concerned about the high risk of mismanagement of the sector and the resource curse. The government has implemented several reforms but the speed and effectiveness of these have been questionable. It remains to be seen whether the government’s goodwill and dedication to increased transparency will continue once the oil revenues start to flow and Uganda becomes less dependent on international aid.

WHILE its breathtaking landscape makes Uganda a top tourist destination, the attention of investors and the international community has been caught by the discovery of 21 oil and gas fields. The finds were made between 2006 and 2014 near the border with the Democratic Republic of Congo (DRC). They have been described as Africa’s biggest onshore discoveries in 20 years.

Although the presence of oil in Uganda’s Albertine Rift region has been known since the 1920s, a consistent effort to establish the country’s petroleum potential began only in the 1980s, when legislation was set in place.

Within two years, the estimates of Uganda’s petroleum resources increased from 3.5 billion barrels (bnbls) of oil in place in 2012, to 6.5 bnbls in 2014. Of these 1.4 bnbls are estimated to be recoverable, although it remains unclear whether these figures refer to technically or economically recoverable. 14 billion cubic metres (bcm) of non-associated gas (that is gas produced independently of oil) have also been discovered.

The country’s first production licence was issued in 2013 to CNOOC for the Kingfisher field. Oil production is expected to begin in 2018, at a projected daily rate of 125,000 barrels per day (bls/d), although this could be as high as 200,000 bls/d placing Uganda in the ranks of mid-sized oil producers, like Brunei, Sudan, Trinidad and Tobago, and Yemen.

According to Uganda’s Ministry of Energy and Mineral Development, the country has an unprecedented drilling success rate with more than 85 per cent of drilled wells finding oil and gas – the rate is one of the highest in the world. Additionally, the cost of finding oil and gas is among the lowest in the world, at less than US$1 per barrel, compared with a world average cost between US$5-25. 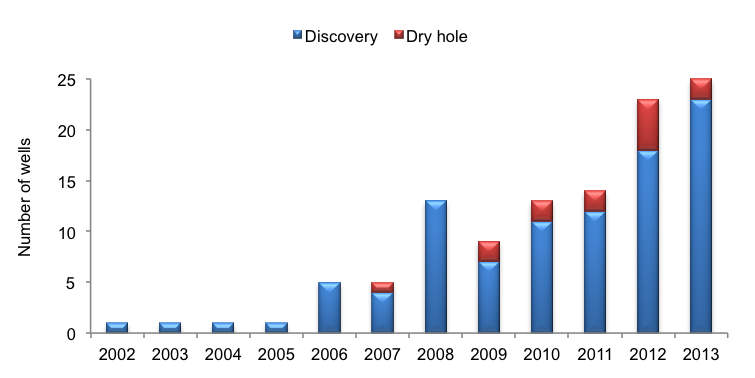 Since 2006, investment has increased substantially. The total investment in Uganda’s oil and gas sector over the next five years is expected to exceed US$10 billion, mainly in field and infrastructure (pipelines and refinery) development.

The government hopes that the oil and gas sector will transform the country from a low-income into an upper middle-income country by 2040 and from a net importer to a net exporter of oil and its products. Caution, however, is recommended with respect to estimates of future oil revenues, especially in today’s new oil price realities.

Energy poverty exists at all levels in Uganda. The power sector has been in a dire condition with acute power shortages. Only 12 per cent of the population, and less than one per cent of the rural population, is connected to the national grid. The existing installed capacity is unable to meet the growth in demand, posing a major challenge to industrial growth and economic development.

The energy sector is predominantly dependent on biomass, mainly wood fuel, which accounts for up to 92 per cent of the country’s total energy needs. The other sources of energy are petroleum products (six per cent) and hydro-electricity (two per cent). This dependence on biomass is one of Africa’s highest. The high demand for wood fuel has resulted in the depletion of forests, and exacerbates land degradation.

The development of the domestic oil and gas sector can help to improve these poor conditions, by providing alternative feedstock to new power plants.

Because Uganda is landlocked, situated about 800 km from the Indian Ocean, and therefore remote from the global market, export of crude oil will require an international pipeline. Three possible routes were assessed: Northern route to Lamu Port in Kenya; Central route to Mombasa also in Kenya; and Southern route to Dar es Salaam in Tanzania.

In October 2014, the World Bank pledged US$600 million to facilitate the construction of a regional pipeline linking oil fields in Uganda, Kenya and South Sudan, which will also help landlocked South Sudan export its production.

Uganda’s oil has high wax content, therefore difficult and costly to process and transport. The pipeline has to be heated throughout otherwise it would create the largest candle in East Africa.

In this sense, while the finding cost is low, the cost of building the infrastructure negates that attractive feature. This partly explains why production, which was originally expected for 2009, has been postponed. 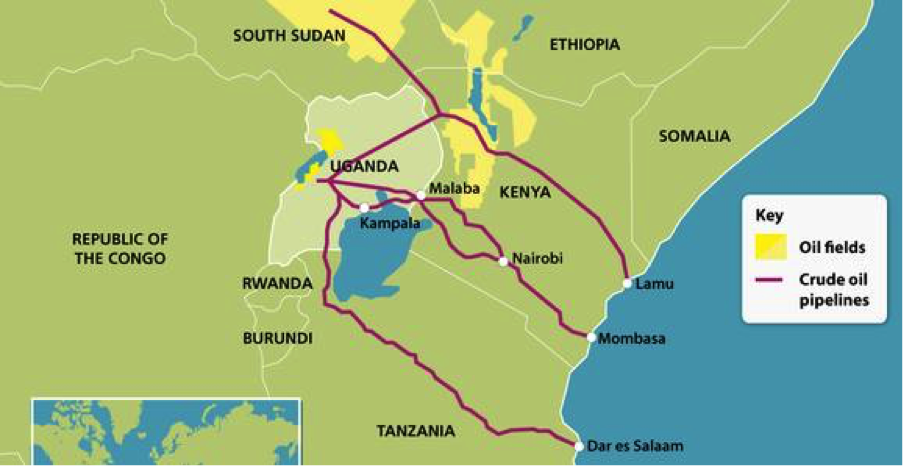 The legacy of border disputes in East Africa, especially the traditional accutane to buy tensions between Uganda and the DRC, act as an additional challenge. There is also the security aspect. In 2014, the US Intelligence Community Worldwide Threat Assessment stated that East African governments will have difficulty protecting the wide range of potential targets from al-Shabaab-affiliated extremists.

Uganda has no domestic refinery, and all petroleum products are imported, mainly from the refinery in Mombasa, Kenya, which also supplies the other countries in the East African Community – the intergovernmental organisation the African Great Lakes region. This gives Kenya some degree of a virtual stranglehold over the economies of its neighbours. In an attempt to reduce this perceived vulnerability as well as its import bills, the government of Uganda plans to built the country’s first refinery.

Six firms and/or consortia were originally shortlisted: Marubeni Corporation (Japan); Consortia led by: China Petroleum Pipeline Bureau; Petrofac (UK); RT – Global Resources (Russia); SK Energy (South Korea); and VITOL (Switzerland). The competition has come down to two consortia – one led by SK Group and the second by RT-Global Resources. The winner will be announced in February 2015.

Oil companies operating in Uganda favour exporting production over refining – a position also echoed by several donors but one which goes against the government’s preference. Typically, outside the Organisation for Economic Co-operation and Development (OECD), refineries end up being subsidised by local governments. Refining is a marginal business and, in a landlocked country like Uganda, the commercial challenges are more pronounced.

Equally important is the concern about the resource curse – a well-documented phenomenon often affecting developing countries, whereby resource-rich (particularly minerals and hydrocarbons) countries often grow more slowly than resource-poor countries. This is what experts have also labelled as ‘the paradox of plenty’ – resource rich, economically poor.

Modern states require a diversity of economic and industrial activity and sustainable methods of raising revenue, efficiency in governance and administration, as well as comprehensive policies of public expenditure and provision of public services. Uganda is still lacking these things. It ranks 142 out of 170 countries on the Corruption Perception Index. The International Monetary Fund (IMF) warns that insufficient expertise, governance, and policy coordination threaten the country’s growth prospects. The US Department of State adds population growth, power and infrastructure constraints, underdeveloped democratic institutions, and human rights deficits, to that list.

It is likely that oil revenues, once they flow, will dominate the government budget. By investing in a refinery, the government will further increase its dependence on these revenues – an antidote for economic diversification which is an important weapon to fight the resource curse.

The government has implemented several reforms and introduced new legislation to support the sustainable development of the oil sector. A new regulatory agency has been founded and a national oil company will be created. A Sovereign Wealth Fund to manage potential oil revenues will be established as Uganda hopes to follow the path of ‘Norway not Nigeria’.

There has also been some attempt to improve transparency of oil contracts after some signed contracts were leaked and showed discriminatory treatment between investors and divergence from the legislation. However, such problems are commonly found in developing countries at the initial stage of their oil industry where host governments lack the knowledge of the sector and the oil companies have much stronger bargaining powers.

It remains to be seen whether the implementation of various policies and reforms will outpace the development of the oil sector and whether the government’s dedication to increased transparency and efficient management of the sector will continue once the oil revenues start to flow and Uganda becomes less dependent on international aid.

The development of the oil and gas sector, if managed in a transparent and efficient way, will help the government to achieve its target of becoming a middle income country. It will also have a positive regional spill-over effect, both economically and politically, through stronger business and trade ties with neighbouring countries. However, that is easier said than done.

The oil and gas sector can dwarf any other sector the Ugandan economy has witnessed. It will also bring many complexities and challenges. The list of developing countries that have succumbed to the oil curse is long. The risk is high in Uganda.

Economic diversification and commitment to transparency are powerful tools to overcome that risk. While the decrease in the oil price may have dampened investors’ enthusiasm towards the region, the government can still reverse that perception if it puts the right policies in place.