I am standing on the main oil producing platform of Gullfaks C, the heaviest infrastructure ever made by man, 150 miles into the Norwegian sector of the North Sea and I am wondering what, I, a 27 years old Lebanese woman, am doing in the middle of this macho world of steel, concrete and oil.

Most people would assume that this is not a woman’s world. But, surprisingly, they would be wrong. Already one of the major gigantic platforms in this field is managed by a woman.

All round the globe women are at last beginning to break through the glass ceiling in industry and the major corporations. This even seems to be now true in the world of oil and gas, traditionally seen as a male preserve of hard-bitten oil executives and tough well-head operatives. The question in my mind is how far this message has reached the Arab world, where oil is the central backbone industry and yet where a male orientated culture still appears to be overwhelming?

Everyone is talking about increased democracy in Arab countries. That means a fundamental change in the status of women. The two are inseparable. The British are seen as one of the world’s oldest democracies, but actually democracy only came to Britain in 1922, when women at last got the vote. The role of women is now the key. Democracy and the empowerment of women go hand in hand, as much in Arabia as anywhere else. There will be no social development and no real economic progress without massive change on this front.

Despite a discouraging cultural context in Arab countries, in which women are not encouraged to be as assertive and determined as men, there has been a remarkable progress in a number of areas, especially in teaching and medicine. But the question is: has this message reached the higher echelons of the oil industry? 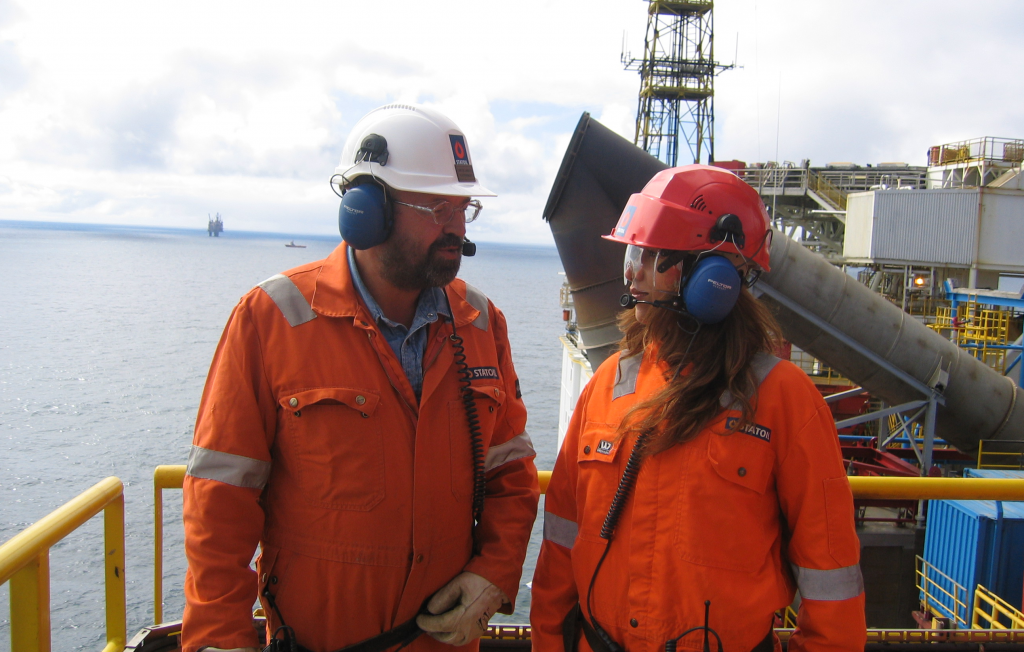 Dr Carole Nakhle on the platform of Gullfaks C, Norway

When it comes to ‘big oil’ and the major operators in this field the whole perception is one of male dominance and one has to ask why? Is it all the macho image of those hard hats and oil spattered engineers struggling with giant spigots – the stuff of photo images and publicity hand-outs?

I am a professional petroleum analyst, working my way up through this huge and powerful industry. Time and again I have walked into a room full of oil executives and felt a frisson of surprise that a female should be so involved in such a masculine environment.

But let’s dissect the whole argument and its attendant attitudes. First, important though this front-line aspect is, it is certainly not the only operation in the process of producing and marketing oil, or even nowadays the major part of the process. Long and complex phases lie behind the familiar well-head pictures – each phase just as important to the overall process and each phase requiring an enormous variety of skills. For instance, at the very initial stages of oil and gas activities, the Government, the natural resource owner, considers whether to transfer this ownership to the private sector, as is the case of the UK, or maintain its sovereignty and control the industry through its national oil company, as is the case with the majority of Arab oil producing countries.

This is a major complicated decision area, generating a significant debate and demanding intense analysis. Take for instance what’s happening in Iraq right now, where key decisions about the status of the recovering oil industry have to be made. What this needs is the best brainpower requiring considerable studies and deep analysis and comparisons. Never mind about the gender. It is the finest minds which are needed – with the right background knowledge, the feel for the industry and the essential analytical skills.

Or take the matter of tax regimes. These can be decisive both in investment decisions and in operational decisions, and indeed in the petroleum industry’s long-term global sustainability. Governments of oil producing countries face important challenges when designing a tax system that meets the two fundamental objectives of ensuring a fair share of revenues for themselves whilst simultaneously providing sufficient incentives to encourage investment. Again, this sort of decision requires considerable studies and meticulous analysis and should be undertaken by the specialists with the necessary qualifications, regardless the gender. The banking and financial industries have long shown what women can do, right at the top. The oil industry should follow.

Today’s oil and gas sectors offer a growing variety of opportunities ranging from accounting, law, economics, politics, to mathematics and engineering. It takes only few minutes surfing an oil company’s website, like Shell or BP, to see the variety of jobs such companies offer. There is no solid argument whatever that prohibits the involvement of women in these crucial areas. On the contrary, how can i buy accutane online women not only have all the necessary requirements to be involved in this traditionally male dominated industry but also to bring it vital new perspectives that may well have been lacking in ‘traditional oil’ – to the industry’s great cost.

Even in the area of supposedly hard physical operations in E&P the advance in technology, and the use of sophisticated computer models have brought huge simplifications, radically reducing the need for physical effort. Muscle has simply become less important than the analytical ability. Gender matters not at all.

Of course, it is an exaggeration to claim that women have been excluded, altogether, from the oil and gas sector, whether in Arabia or anywhere else. But it is in the higher reaches and the top jobs where their absence is most glaring.

Is change on the way? Over the last few years the mood does seem to have altered. Some even argue that even when it comes to oil, it’s not just a man’s world any longer. From loading tankers to human resources to vice presidents and presidents, women are becoming increasingly involved. Still, the plain fact is that men continue vastly to outnumber women especially at the technical and executive levels. At these levels according to an American study, the representation of women in crude oil production and mining companies is less than 6.5 percent.

Even this low figure is an improvement of sorts. Although women are moving relatively slowly within the oil and gas sectors, they are indeed standing out and making a significant difference in this industry. In South Africa, for instance, women have formed a new organization, Women in Oil and Energy South Africa (WOESA), to identify business opportunities for women in the oil and gas and facilitate their participation.

It is in the Middle East, which holds 63.3 per cent of the world’s oil reserves, that the vital change of attitude is still needed. Women should, indeed must, be given a full and equal chance to participate in decision-making at the top levels. The change needs to start from the beginning at school. This is the place where girls should be really encouraged to look beyond the usual careers and consider a major role in an industry like oil and gas.

Most importantly, it needs to be grasped that what women can bring to this enormous industry is not just substitution for existing male-held jobs. They can bring precisely the qualities and perspectives needed to help oil adjust to the new energy age, and their appraisal should focus on their achievements and capabilities to meet these vital objectives. At the same time, women should believe in themselves, and focus on developing their existing skills and learn new ones while avoiding comparing themselves to men or concentrating on outperforming men. Throughout Arabia, and not only Arabia, women should be ready to take challenges and break right out of the victim syndrome- the implication that they are somehow inferior. They should avoid taking things personally and looking too zealously for any sign of gender discrimination, even if they exist, as they certainly still do. To do otherwise is to play the traditional male game, as well as to hinder their own progress and waste their energy.

So the message to the oil companies, whether state owned or private, should be clear, as well as to the many talented women now ready to serve industry and improve its all-round performance. Once women take the initiative to develop their skills and enter relatively new sectors the obstacles will shrink. They may even vanish completely, when society witnesses not only their courage, determination, hard work and thirst for learning, but the crucial ingredient of sensitive understanding of modern needs which maleness often, although not always, grants too low a priority. It could even become not just a matter of letting women in, but of fighting to bring them in to ensure the right kind of industrial change.

In short, in today’s revolutionary conditions of production, transformed by the amazing informational revolution of the last three decades, women who really want something and are willing to put in the hard work it takes to achieve that goal, can accomplish anything. That is no longer a cliché. It is the reality.

So perhaps it is time to re-draft the slogans. Gold and diamonds were always claimed to be a woman’s best friends. Now there is the wide-open opportunity throughout the Arab world to prove that the black gold can be her friend too.

As for those who are surprised to see women interested in the oil and gas sectors, they need to think again, and start by asking themselves a simple question: who restricted the oil industry to men?

The article was first published in Oil, Gas and Energy Law in 2005 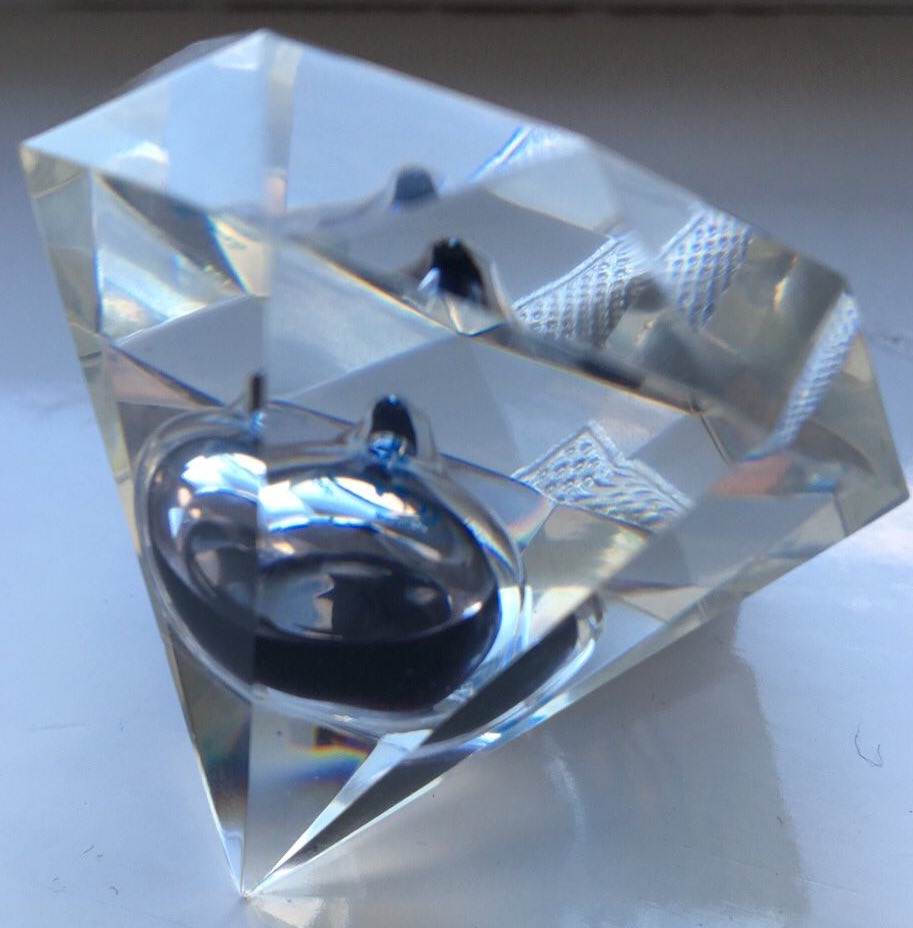 Black gold can be a woman’s friend

PrevPreviousDid the UK Miss Out on £400 Billion Worth of Oil Revenue? – Keith Myers and David Manley, NRGI
NextAccess for Women in Energy Newsletter – Oct 2015Next