Oil and gas pins its hopes on new technologies

The renowned Scottish scientist and inventor Alexander Graham Bell once noted: “When one door closes, another opens.” This axiom well describes the evolution of the oil and gas industry. Over the decades, it faced numerous threats such as nationalization of their assets and restrictive regulations and policies; now the challenge is alternative energy. And yet, the industry has continually managed to reinvent itself and adapt to new conditions by exploiting technological innovations, included those borrowed from other sectors.

Today the oil and gas industry is facing growing disruptive pressures and severe external threats. Governments around the globe are trying hard to regulate the transition to the post-fossil fuel era. Policymakers are looking beyond the use of oil, gas and coal in their quest to limit carbon emissions and their harmful impact on the climate. While the deployment of renewable energy is increasing at a rapid pace, however, its contribution to the global primary energy mix remains small. According to the International Energy Agency (IEA), oil and gas still meet 60 percent of the world’s energy needs, touching almost every aspect of modern societies.

The challenge for the oil and gas industry, therefore, is to continue delivering fuels that world economies still need while minimizing the impact of its activities on the environment and making the consumption of its products more efficient. Advances in technology are making these tasks possible. 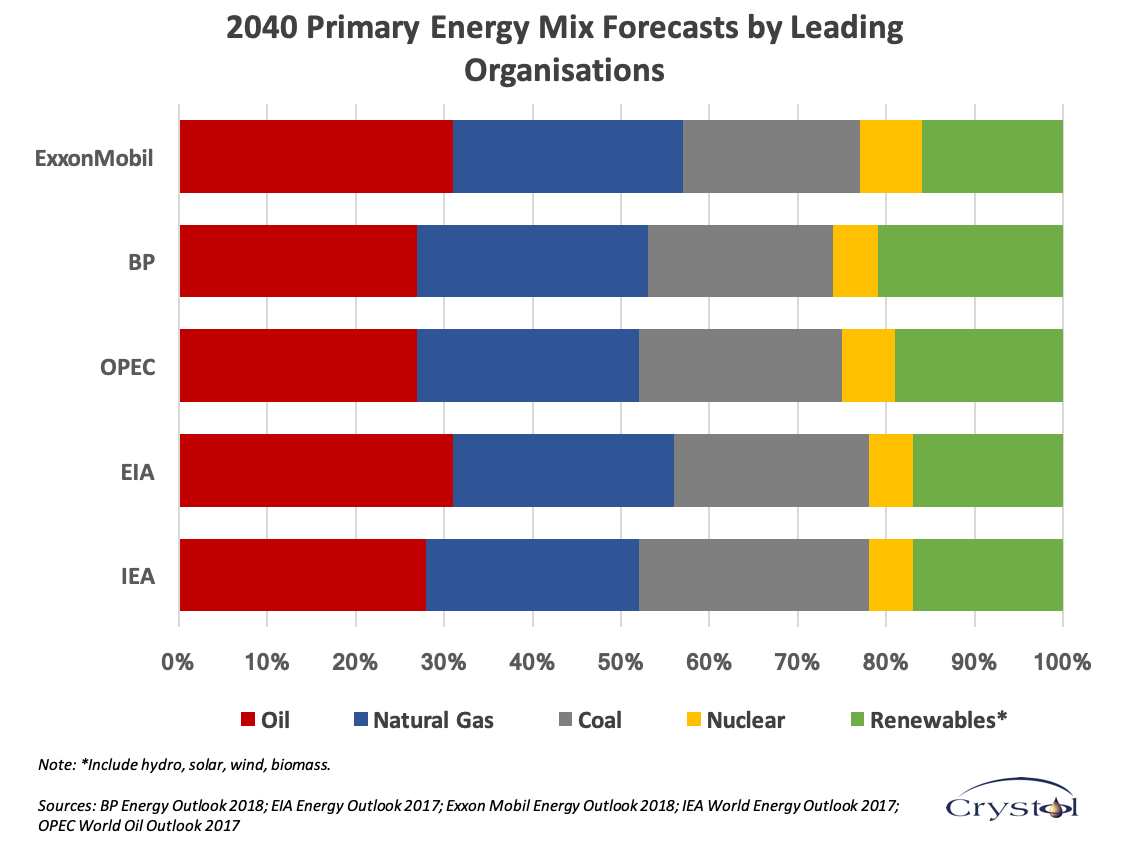 Petroleum’s earliest widespread use (in the form of kerosene) was for lighting. In the mid-1800s, kerosene was a much cheaper, widely available alternative to whale oil. When American inventor Thomas Edison patented the first electric light bulb in 1879 the market for kerosene lamps dried out. However, the invention of the gasoline-powered internal combustion engine in the late 19th century redefined mobility. The motor vehicle replaced the horse and buggy, and created an entirely new market for petroleum. Since then, oil’s dominance in the transport sector has remained unchallenged.

When large Western oil and gas companies were hit by a wave of nationalizations in the 1960s and 1970s, losing their productive assets in core regions such as the Middle East, they defended their business position by prospecting new areas like Alaska and the North Sea, and drilling in deeper, uncharted waters. Those deposits were previously considered “unconventional” and off-limits because the technology to explore in harsh climates and deep water was not yet commercially viable.

Thanks to technology, the definition of commercial viability has significantly evolved since. Not long ago, depths of below 200 meters were considered deep water. Fast forward: in 2016, Denmark’s Maersk Venturer drillship spudded a well 250 kilometers off Uruguay’s Atlantic coast at a depth of 3,400 meters. Today, the industry can drill accurately controlled deviated wells to distances, depths and under pressure conditions that were previously unimaginable.

When the scare about the world running out of oil – the so-called peak oil supply – spread in the first decade of this century, a new chapter opened in the annals of the oil and gas industry. The shale revolution in North America, made possible by a combination of horizontal drilling and hydraulic fracturing (also known as fracking) techniques, provided the means for oil and gas extraction from previously noncommercial deposits in shale rock with low permeability. What started as a “silent revolution,” primarily driven by small independent companies, has fundamentally altered global oil and gas markets.

Looking ahead, the industry faces another threat that challenges its traditional business model. At the annual G7 summit in 2015, the leaders of the world’s seven largest advanced economies agreed to phase out the use of fossil fuels by the end of the century. France and the United Kingdom announced they would ban the sale of petrol and diesel engines from as early as 2040. Sales of electric vehicles have boomed, with the Nordic countries – Denmark, Finland, Iceland, Norway and Sweden – leading what seems to be an unstoppable march.

Meanwhile, in China, the world’s largest energy consumer, renewable and nuclear energy are expanding rapidly. Stricter goals for curbing emissions associated with oil consumption, such as the 2018 International Maritime Organization’s (IMO) standard to limit the global sulfur pollution from ships, are putting additional constraints on the industry. Concerns about peak oil supply have been replaced by talk about peak oil demand, though no one knows when that point would be reached. The aging global workforce and a growing shortage of skilled labor are not helping the industry, either.

Oil and gas companies have been busy reinventing their image as an industry that can still thrive in a greener age. The Oil and Gas Climate Initiative (OGCI) is one example. Launched in 2014, this venture is CEO-led and involves 13 global oil and gas companies, private and state-owned alike, including BP, Chevron, CNPC, Equinor, Eni, ExxonMobil, OXY, Pemex, Petrobras, Repsol, Saudi Aramco, Shell and Total. The group aims to reduce greenhouse gases (GHG) emissions through collaboration and technology. In 2016, it established a billion-dollar investment fund, OGCI Climate Investments, to back promising technologies with the potential to significantly curb GHG emissions.

Furthermore, each of the companies involved (and many others in the industry) have their green technology programs to keep their businesses viable for decades to come. Earlier this year, BP acquired a 43 percent stake in Europe’s largest solar developer, then announced it would purchase Chargemaster, the UK’s leading electric vehicle charging company. Norway’s Equinor is investing in a process to convert natural gas to hydrogen (by decarbonizing hydrocarbons). Petroleum Development Oman (PDO), a joint venture owned by the government of Oman (60 percent) along with the Shell Group (34 percent), Total (4 percent) and Partex (2 percent), has partnered with U.S.-based GlassPoint to build Miraah, a 1,021 MW solar thermal energy facility at the Amal field in South Oman. The project’s aim is to maximize the recovery of oil from the field.

A cynic might argue that the investment in alternative, green energy remains small in comparison to these companies’ outlays on their core oil and gas operations. For example, Shell’s capital investment between 2018 and 2020 is expected to amount to some $25 billion to $30 billion annually. Of these sums, only $1 billion to $2 billion (or 4-7 percent of the total) will be allocated to “new” energy sources; the rest will go to oil and gas, especially upstream.

These numbers, however, can be viewed in a different light. On the one hand, exploration and production of oil and gas require the continuous injection of capital, since depletion of oil fields makes it a naturally declining business. On the other hand, for any new technology to take off, the core question is whether it has commercial potential. The jury is still out on many of these new energies.

The Carbon Capture and Storage (CCS) technology, which prevents up to 90 percent of the carbon dioxide (CO2) released by fossil fuels from getting into the atmosphere, has been around for more than 20 years. The first large-scale CCS project, Norway’s Sleipner offshore storage facility, has been in service since 1996. Broad application of the technology, however, has been hindered by its cost and mixed signals from governments. According to the IEA, policy support for the CCS has fluctuated sharply, rising during the first decade of this century but waning after 2009. This shift coincided with the failure of the Copenhagen meeting on climate change and the global financial crisis.

Even so, the trend may be reversing itself again. In October 2017, for example, the British government announced its goal of making the UK a global leader in implementing CCS technology, provided that its costs could be brought down sufficiently.

New-generation IT technologies have generated much excitement in the oil and gas industry, especially those related to artificial intelligence (AI, also known as machine learning), the blockchain, cloud computing, robotics and the Internet of Things (IoT). These information technologies are taking the energy sector by storm.

Digitization is primarily about data and the oil and gas industry is no stranger to “big data,” in its intuitive meaning. Every single well drilled generates massive amounts of information that had been stored but until recently was only partially used. These days, digital technology rapidly collects and analyses colossal pools of diverse data and converts them into actionable information to be shared with wider networks. The outcome is a better, more accurate and faster decision-making process, more efficient operations and more predictable project performance. Digital technology also minimizes the “human factor” – the exposure to error risks.

The IEA estimates that the use of digital technologies could boost technically recoverable oil and gas resources by about 5 percent globally, while decreasing the industry’s production costs by 10-20 percent. Savings can be realized through advanced processing of seismic data, the use of sensors and enhanced reservoir modeling. A study by Barclays Investment Bank describes the digitization process as turning the billions of pieces of data generated each year into a tangible cash-flow benefit, through lower unit costs and higher output. This, in turn, will help close the significant productivity gap between Big Oil and the broader economy, where the oil sector lags behind, according to Barclays.

Undoubtedly, digital is the fastest-moving technology trend across the entire energy industry. Its full impact will unfold gradually over the coming years. These technologies will grow more prominent as the industry recognizes their importance to maintaining competitiveness, which is the key to longevity. The scale of oil and gas companies’ investment in developing and applying new technologies is one significant indicator that they have no intention of disappearing any time soon.

Oil and gas industry invests to adopt to post-fossil future

“The Impact of Digitalisation on Employment in the Oil and Gas Industry”, Access for Women in Energy, Oct 2018