When experts, policy makers and commentators discuss major technological developments in the energy sector, their attention is often focused on modern renewables, which they describe as disruptive technologies.

If one takes a closer look at the data, however, a clear fact emerges: the impact of new technologies in fossil fuels, specifically those developed to produce shale oil and shale gas, has been larger than that of renewables. Shale technology has been by far the more powerful force, fundamentally altering the global energy markets and challenging the existing order, with serious spillover effects on the global economy and geopolitics.

A “disruptive technology” – a term coined by Harvard professor Clayton Christensen in 1997 – transforms a market and completely redefines an industry. It compels existing producers to alter their business strategy or risk losing market share and becoming irrelevant. This phenomenon can occur in any industry, as the example of computer and smart phone producers shows.

In the energy sector, disruptive technologies have for centuries transformed people’s lifestyles all over the world. The invention of the gasoline-powered internal combustion engine in the mid-1800s redefined mobility. The motor vehicle replaced its predecessor, the horse and buggy, and removed one of the worst forms of urban pollution –thousands of tons of manure littering city streets. It also created an entirely new market for petroleum, which had been originally used for lighting. Since then, oil’s dominance in the transport sector has remained unchallenged, and that dominance explains its strategic role in modern societies.

Fast forward to the early 21st century, and we see two technologies coming into use at practically the same time: modern renewable energy and shale technology.

Supported by the global concern about climate change, the deployment of cleaner energy sources, such as solar and wind power, expanded rapidly and almost everywhere, although rich countries have been renewables’ biggest fans. In his 2009 inaugural address, President Barack Obama predicted the United States would “harness the sun and the winds and the soil to fuel our cars and run our factories.” Mr. Obama was not alone in this desire. Across the globe, energy policies were rewritten with ambitious renewable energy targets and generous subsidies were allocated to support the expansion of these otherwise costly technologies.

Around the same time, a silent revolution, driven by small independent companies, was taking place in the U.S. A combination of horizontal drilling and hydraulic fracturing (also known as fracking) techniques allowed oil and gas to be extracted from previously non-commercial deposits in shale rock with low permeability. In this process, fluids are injected under high pressure to break up these geological formations and release the trapped fuels.

Originally, a lot of cynicism surrounded shale technology, which was dismissed as overhyped, expensive and short-lived. But shale’s doubters were proved wrong and its lasting impact took everyone by surprise. U.S. oil and gas production staged an impressive recovery, reversing decades of decline and reducing its reliance on imports. With shale technology, the whole picture changed dramatically. Since reaching a peak of 9.6 million barrels per day (Mb/d) in 1970, U.S. oil production shrank steadily for four decades. This inexorable decline was only broken in 2009, when shale oil began to reach the market in large quantities. Similarly, in 2011, U.S. natural gas production exceeded its previous peak from 1973 and has continued on a new path of expansion.

Impressive numbers are given about the rapid growth of modern renewable energy. This category excludes hydropower and biomass because they are much older sources of renewable power, and also because the former requires the presence of rivers. Renewable energy output expanded last year at an annual rate of 13 percent worldwide, according to BP’s Statistical Review of World Energy 2016. By comparison, U.S. shale oil and gas production declined by 14 and 3 percent, respectively, over the same period.

Renewable energy benefits from favorable regulations and strong government support, both financially and legally. Shale oil and gas get much less sympathy because they are fossil fuels and their extraction method has been considered hazardous. The shale industry is tightly regulated and even banned in such places as France, Bulgaria and the state of New York. Since shale oil and gas producers are part of the extractive industry, they are subject to a different fiscal regime that adds substantially to their business costs and often face heavy regulatory burdens as well.

One key feature of renewable energy is its wide geographical spread: from China to Jordan, Denmark to Morocco and Peru. Shale production, by contrast, remains largely confined to one country, the U.S. 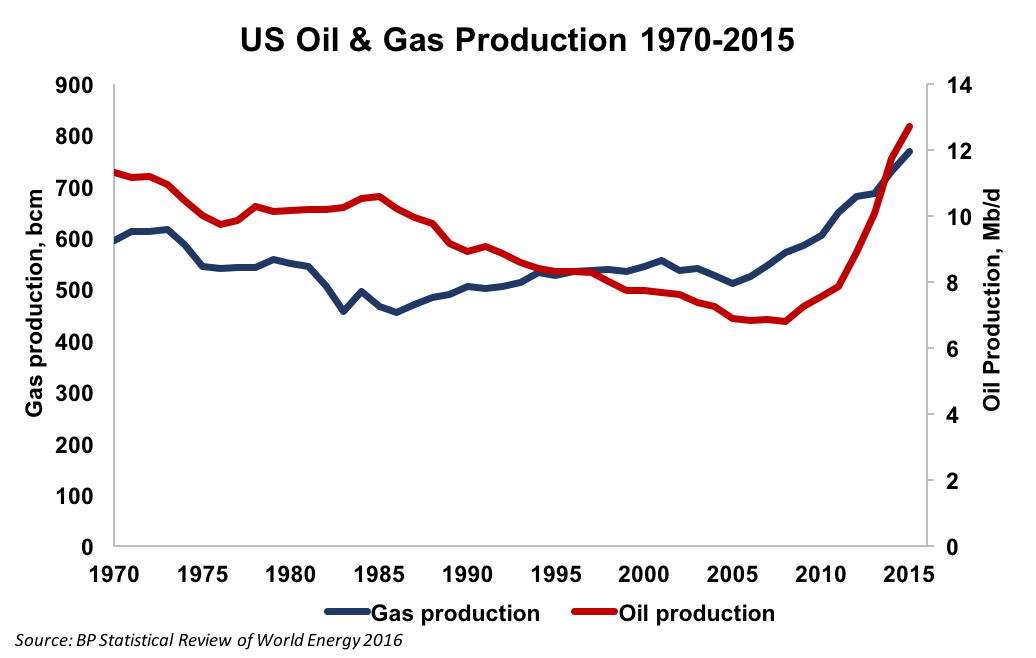 One would therefore expect modern renewable energy to have a much bigger impact on the global energy market than shale. In reality, the reverse is true. The contribution of modern renewable energy (solar, wind and biofuels) to the world’s primary energy mix is approximately 3 percent. Even when examined on a country level, the picture is not very different. In 2015, China recorded the largest increase in solar power, overtaking Germany and the U.S. to become the world’s top generator. China was also the second biggest producer of wind energy after the U.S., and the fifth in biofuels, after the U.S., Brazil, Germany and France. Despite this impressive progress, renewable energy (excluding hydropower) accounted for just over 2 percent of the Chinese primary energy mix.

Shale oil and gas, by comparison, make up more than 5 percent of the world’s total primary energy mix, despite being confined to one country. This is truly remarkable. Shale technology’s potential may therefore be much bigger than what the world has seen so far; its full impact is yet to be experienced.

Perhaps the most important lesson to be drawn is what experience and history have long shown: technologies that rely on markets tend to develop much faster than those relying on government support, because they are economically viable. Nuclear power’s difficulty in sustaining growth despite six decades of massive government subsidies can serve here as a useful analogy.

There is no doubt that solar and wind energy will continue to expand, as indeed they should if the world economy is to reduce its carbon footprint. Their effect, however, is more likely to be felt in the longer term. Besides starting from a very low base, the main handicap facing solar and wind power generation is intermittency and lack of storage. For example, solar power is most needed during peak demand, which in most countries usually occurs in the evening hours, when the sun is not shining. Cost has been another important obstacle. It is true that the costs of solar and wind energy, in particular, have been declining (as has the cost of shale oil and gas), but it remains to be seen if these technologies can become commercially competitive with other sources of energy without any government support.

In the more immediate future, shale technology – the child of market forces – will continue to alter the fundamentals of global energy. In the oil market, it has forced OPEC to rethink its strategy. Last year, for the first time since 2008, the organization announced a coordinated production cut that took effect in 2017. The decision was supported by a Russia-led coalition of non-OPEC producers, making it the largest coordinated intervention in the history of the oil markets. Although such an offensive move seems to have put a floor on the oil price, halting further declines, any upside has been restricted by the possibility of North American producers increasing shale oil output in response to rising prices.

In the natural gas markets, the development of shale has also made trade more fungible and challenged the old pricing order, accelerating the delinking of oil and gas prices and tilting bargaining power in favor of consumers. This has forced major producers like Russia to rethink their long-term contracts.

Going back to shale energy’s birthplace – the U.S. – the economic gains resulting from the industry’s development and perhaps more importantly from the reduction in oil and gas imports will give the new administration of President Donald Trump a longer lease on life. Achieving energy independence has been the aspiration of almost every U.S. president since the World War II. For many decades, it seemed to be a pipedream. Thanks to the shale revolution, it could become reality under Mr. Trump.