Clean Energy and Fossil Fuels in the Middle East: A Virtuous Cycle?

The coronavirus pandemic has overshadowed several issues that pre-crisis were top priorities for many governments and organizations around the world. One such agenda item is the energy transition, which refers to the transformation of our energy system from one that heavily relies on carbon-dioxide-emitting fossil fuels – coal, gas and oil – to one which is dominated by green and clean sources of energy. Although no one knows how long and how deep the current crisis is going to be, or what the shape of recovery will be, it is only a matter of time before the push for the energy transition will regain its pre-crisis fervor.

The world’s determination to fight climate change and green the energy mix is a concern for any oil and gas producer, and the more so for the large Middle Eastern oil exporters which sit on massive proven hydrocarbon reserves, expected to easily last another 60 years. (See figure below.) The risk of such assets becoming stranded and losing value is high, with dire consequences for these poorly diversified economies. This prospect is probably the most apparent and often discussed impact of the energy transition on Middle Eastern oil producers.

In reality, however, the picture is more complicated. The limited diversification of Middle Eastern oil exporters with regard to both their primary energy mix and their economies will conspire to increase – not decrease – cheap oil and gas exports from the region as the energy transition gets underway.

The domestic energy transition: Increasing oil and gas exports from the Middle East

The Middle East is truly a unique region with respect to its limited energy diversification, regardless of whether countries are net importers or exporters of oil and gas. The dominance of these two hydrocarbons in the region’s primary energy and electricity mix is remarkable. In countries like Kuwait and Saudi Arabia their contribution is nearly 100 percent. Outside the region, the mix is much more colourful as countries meet their energy needs from a greater variety of sources of energy, from fossil fuels to renewable and nuclear energy. Overall, the Middle East is the least diversified in the world with respect to the primary energy mix:

The region’s oil and gas exporters have set ambitious targets to diversify their energy and electricity mix. The United Arab Emirates (UAE), for instance, aims to obtain half of its primary energy from clean sources by 2050, from less than 2 percent in 2018. This should be a welcome move, from an environmental perspective, especially since the region encompasses some of the biggest carbon emitters (on a per capita basis) in the world. Also, economically speaking, greater use of green energy would free more oil and gas for exports.

The transition of a petroleum-based to a green economy, however, differs from elsewhere. Everywhere, the energy transition does not come cheap. Despite impressive falls in the operating costs of solar and wind power technologies, green energy still requires government support, oftentimes including financial support. For renewable energy, one has to count investment and the full system costs in power generation, not just the generation costs when the sun is shining and the wind is blowing, to take into account the problems of intermittency and lack of storage. For nuclear, the investment costs are substantial, thus making financing on purely commercial terms difficult to obtain and often requiring heavy government support.

In the Middle East, the public sector dominates the economy, especially as far as energy infrastructure is concerned, and the participation of the private sector remains modest. In addition, in many countries, governments have hardly any source of revenues independent from oil and gas. In Iraq, for instance, that dependence exceeds 90 percent. As long as government revenues in the region are dominated by hydrocarbons, hydrocarbon revenues will have to finance the new, clean energy infrastructure.

Once oil and gas have been replaced domestically with cleaner sources for power generation, a virtuous cycle will result: the more clean energy replaces oil and gas in producing countries, the more oil and gas will be available for them to export, and in this way to finance their own domestic energy transition. This reward can be substantial: Saudi Arabia, for example, on a hot day burns more than one million barrels of oil to produce power for cooling. The Middle East in this respect stands out from any other region around the world: here, clean energy substitutes fuels which can actually be sold at a profit. On the one hand, this ultimately provides an incentive to engage in the energy transition. On the other hand, this incentive is inextricably linked to exporting more oil and gas. Progressing the energy transition in the Middle East thus means incentivizing more oil and gas exports to the rest of the world. 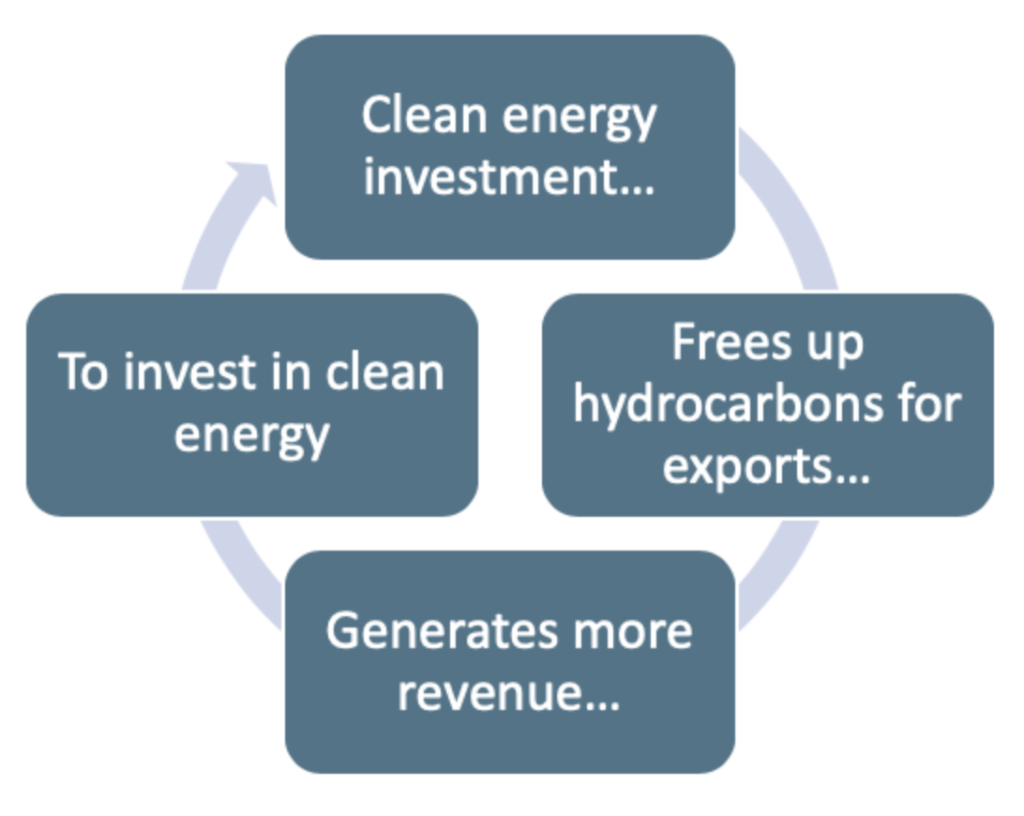 The global energy transition: Increasing oil and gas exports from the Middle East

When analysts discuss stranded assets, they typically take a long-term view of the post-oil and -gas age. However, there will be a considerable period when these energy sources will remain in demand throughout the energy transition, which may span decades. The market for oil and gas during this period will shrink and prices will decline accordingly. The low-cost producers, such as those in the Middle East, will clearly have an advantage and should be the last to leave the market. High-cost producers will be squeezed out first, as they find it hard to sustain production as oil prices decline.

No wonder the region’s national oil companies have been pursuing aggressive strategies to expand their production capacity throughout the oil and gas supply chain. In 2018, for instance, Saudi Aramco announced it would invest USD 500 billion over the next 10 years and the UAE’s national champion, ADNOC, announced an investment of $130 billion by 2023, both in oil and gas capacity expansion.

However, to capitalize on such a strategic position, economic diversification is fundamental. As it stands, despite cheap extraction costs for oil and gas, the cost of maintaining inefficient large economies is overwhelming. The Achilles heel of the Middle Eastern oil producers remains their lack of economic diversification and their need for higher prices to sustain their spending. One illustration of the scale of the challenge is the high fiscal breakeven oil prices that these countries require to balance their budget and which has constantly been above market prices in recent years, resulting in substantial budget deficits. Such a structural weakness easily spoils the region’s competitive advantage of being the low-cost producer. 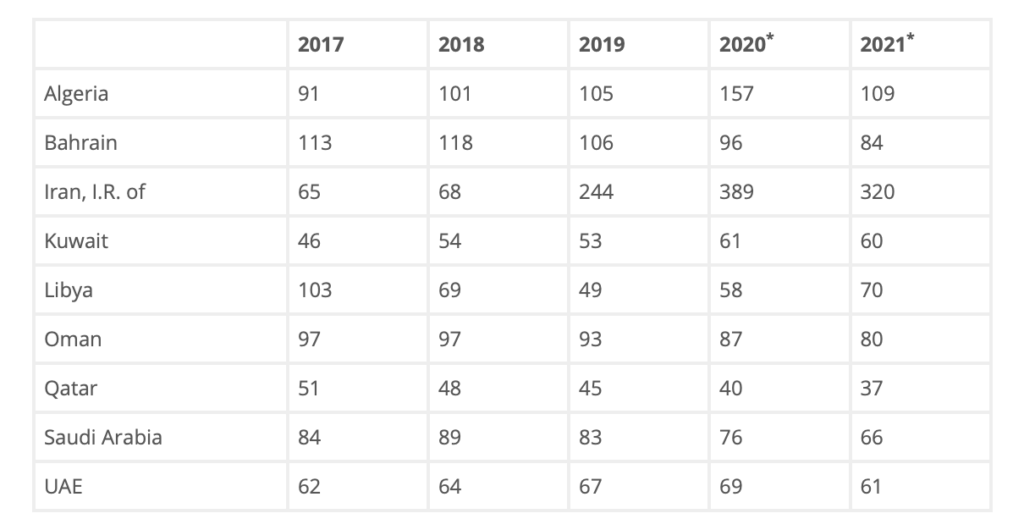 If Middle East oil and gas exporters diligently and successfully pursue economic diversification, they will be able to sustain exports at lower prices, with little economic pain.

What follows next, once the global energy transition progresses significantly, largely depends on whether the region’s oil and gas producers have wisely reinvested their hydrocarbon revenues, so that future income from financial investments will exceed that from hydrocarbon exports. If they do pursue that path, the wealth created from oil and gas will stay with those countries long after these resources’ importance to the economy has faded.

The article was first published by the Natural Resource Governance Institute