The world is scrambling to find new oil supplies because of inadequate investment over the last few years. This reluctance to invest was partially driven by expectations that oil demand growth would slow. It has not so far (except for the hit it took during the height of the Covid-19 pandemic).

Typically, investors analyze how the market and particularly oil demand will look many years ahead because of the long-term nature of oil projects. A relatively new question is increasingly considered in these assessments, namely when oil consumption will peak in the world.

After peak oil demand is reached, it will at some point plateau and then shrink. In a growing market, there is space for everyone. In a shrinking market, for one country to increase production, supply from another country is squeezed out, usually done by price competition. In such a world, market power will shift toward consumers. Today they are desperately looking for oil; tomorrow they will be in a much stronger position.

Oil has dominated the world’s primary energy mix for nearly six decades. Although its share peaked in the mid-1970s, when it accounted for almost half of the world’s energy consumption, its demand continues to grow in absolute terms. For instance, in 2019, each day, the world consumed more than three times the number of oil barrels than it did in 1965.

First, for decades, oil demand was concentrated in the developed world – the 38 members of the Organisation for Economic Co-operation and Development (OECD) – which accounted for around 75 percent of total oil consumption in 1965. Since 2013, however, the demand for oil in the non-OECD countries (or the developing economies) has exceeded that of the developed world and in 2019 it accounted for 54 percent of global oil consumption.

Second, in the OECD countries, oil demand peaked in 2005 at around 50 million barrels per day (mb/d). What has been driving the growth in global demand is the developing world, primarily Asia (mainly China and India – the second- and third-largest oil consumers in the world after the United States) and the Middle East (led by Saudi Arabia, which is also the sixth-largest consumer in the world). Between 2009 and 2019, almost all the growth in global oil demand was driven by the developing world, with Asia expected to continue to be the growth center in the coming years. 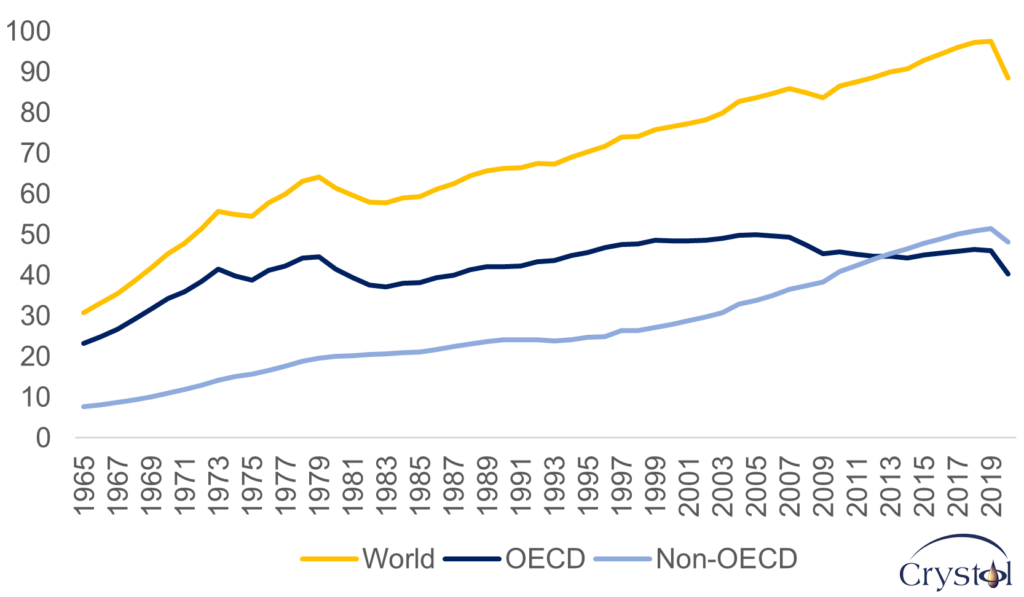 The key triggers behind these trends are primarily efficiency improvements, policy, interfuel substitution, slower population growth and, increasingly, the electrification of the transport sector.

A recently published report by Columbia University finds that the world’s oil intensity – the volume of oil needed to produce a fixed economic output, which is a broad measure of efficiency – has been constantly declining in a linear trend since 1984. In 1973, for example, when oil intensity was at its zenith, the world used a little less than one barrel of oil to produce $1,000 worth of gross domestic product (GDP). By 2019, global oil intensity was 0.43 of a barrel per $1,000 of global GDP – a 56 percent decline. Oil has become a lot less important, and humanity has become more efficient in making use of it, the authors concluded. The main driver has been technology as well as the globalization of markets, which enables a faster diffusion of technical innovation.

A combination of oil price shocks and policy has encouraged the substitution of oil with other fuels. For example, in 1973, just before the first oil shock when Arab countries in OPEC curtailed their supplies in retaliation for Western support for Israel in its war against Egypt, oil accounted for 25 percent of world electricity generation. However, following the subsequent rise in oil prices and the consumers’ quest for greater security of supply, oil’s share in power generation dropped to less than 3 percent by 2019, as it was crowded out by other fuels, primarily natural gas, renewable and nuclear energy.

Oil has maintained its dominance in the transport sector, which absorbs around 57 percent of the total oil consumed in the world. That dominance, however, is facing a serious threat – the electrification of mobility. In 2012, only 130,000 electric vehicles (EVs) were sold globally, accounting for 0.01 percent of total cars sold during that year. In 2021, that number jumped to over 6.6 million EVs or 9 percent of the global car market and more than tripling the market share of EVs from two years earlier, according to the International Energy Agency (IEA). The trend is expected to continue and even accelerate as more countries announce bans on the sale of new diesel or gasoline cars or commit to the deployment of EVs. For instance, the U.S. wants to make half of all new vehicles sold in the country in 2030 zero-emissions vehicles while the United Kingdom announced a ban on new gasoline and diesel cars and vans by 2030. 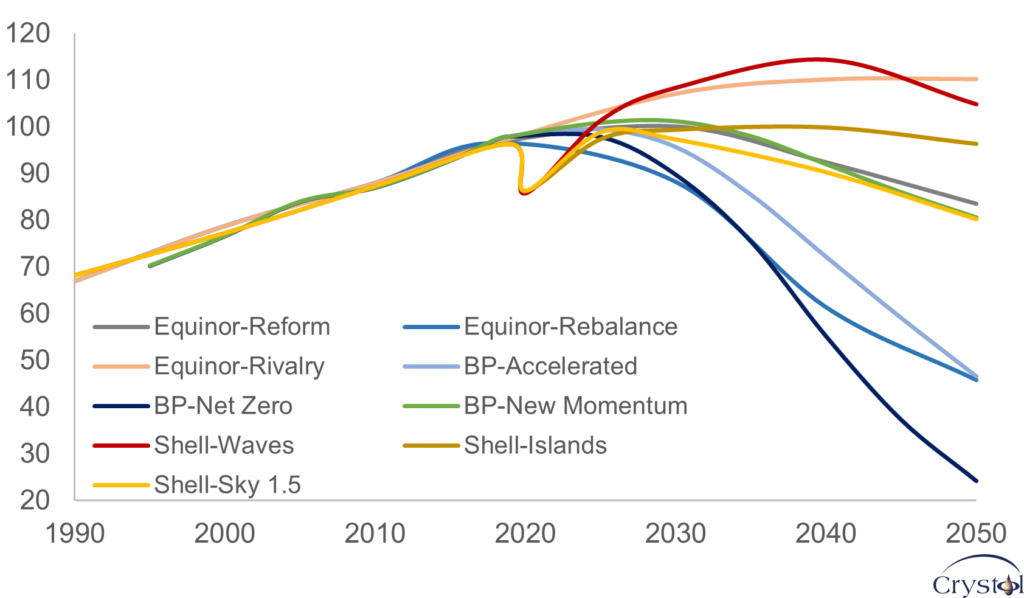 Only a few years ago, peak oil demand did not feature in various sectors’ forecasts. In 2010, the IEA included a peak for world oil demand for the first time in one of its energy outlook scenarios. Since then, peak demand has gained greater prominence in most industry forecasts. In its 2020 World Energy Outlook, BP presented two scenarios where oil demand would never recover to its pre-pandemic levels. Even OPEC, which had a historically bullish outlook for oil demand, acknowledged oil demand peaking in one of its 2020 publications.

However, the year when that peak will happen and at what level vary significantly between publications and even within the same publication. The reason being the differences in assumptions related to variables such as the economic outlook for the forecasted period, decarbonization policies, population growth, the penetration rate of EVs, energy efficiency gains, carbon prices, as well as the rate of deployment of renewable energy sources.

While some projections indicate that oil demand might have already peaked (according to the IEA’s Net Zero Scenario, which assumes a strong stance toward achieving climate policies), others find demand peaking within the next five to 10 years (such as BP’s New Momentum, and Equinor’s Reforms). A very few, most notably OPEC, expect oil demand to plateau by 2040.

Despite the divergences, the consensus is that global oil consumption will peak within the next 20 years. However, all forecasts will be affected by today’s circumstances and assumptions used in long-term energy models will be revisited accordingly. The recent rapid rise in oil prices and the growing fears about the security of supplies will tilt those forecasts toward an acceleration of peak demand.

The OECD experience shows that even when demand peaks, it need not fall off a cliff. However, because of that peak, major oil exporters such as OPEC producers, Russia or even the U.S., are changing their trade patterns as they increasingly turn to Asia, the main driver of growth in oil demand. Once global oil demand peaks and starts to fall, competition among those producers to sell more oil and safeguard market share will intensify.

In a stagnant or shrinking market, producers will face new rules, very different from the ones they have been accustomed to. OPEC’s strategy of cutting supplies to increase prices or Russia threatening to cut its supplies to keep sanctions off its oil exports will no longer work. Higher prices will attract additional production, as it always does. In a growing market that production need not depress prices as there can always be space for everyone. In a shrinking market, however, it will force prices lower. Deliberate attempts to cut production to raise prices would simply backfire. The consumer will end up holding most of the chips.

Of course, this will not happen overnight, but it is a scenario that oil-rich countries surely ought to consider today. Two decades is not a long time frame in the oil industry.

PrevPreviousEnergy Sanctions and the Global Economy: Mandated vs Unilateral Sanctions
NextDr Carole Nakhle among the ‘Top 20 Outstanding Women CEOs of 2022’Next