Declining prices have translated into lower revenues for many oil producing countries, with the economic repercussions particularly significant for those that are oil dependent. One consequence has been fluctuating performance in some sovereign wealth funds (SWFs), as withdrawals and asset liquidations have become more common after commodity prices collapsed.

This does not mean the funds have failed in their purpose, since the discipline and priorities of their government owners may vary. Indeed, petroleum-based SWFs will almost certainly feature prominently in modern economies long after the physical resources are gone.

SWFs have attracted international attention since the late 1990s, following a sharp increase in commodity prices and the subsequent rise in foreign exchange reserves. The term SWF was coined by Andrew Rozanov of State Street Corporation in 2005, but the concept is not new: the earliest such fund, established in 1953, is known today as the Kuwait Investment Corporation.

According to the Sovereign Wealth Funds Institute, the total value of assets held in SWFs reached $7.2 trillion in 2015. Commodity-derived funds (oil, gas and minerals) accounted for nearly 60 percent of this total. The growth of SWFs is likely to continue. Saudi Arabia, a relative latecomer, announced in May 2016 that it will establish a $2 trillion fund – more than double the size of the world’s largest SWF, Norway’s $850 billion Government Pension Fund Global (GPFG) – as part of Riyadh’s Vision 2030 economic development strategy.

SWFs are state-owned investment funds, mainly financed by foreign exchange surpluses derived from export sales of natural resources. They come with such a diversity of objectives, investment philosophies, and political as well as economic ambitions that no single definition fits all of them. This has resulted in different classifications of SWFs. For example, some would treat foreign assets held by the Saudi Arabian Monetary Agency (SAMA) less as an investment vehicle than as the traditional reserves held by a central bank. However, a core mandate shared by most if not all SWFs is to create long-term value by investing in foreign assets.

The rationale for such funds is embedded in the nature of the oil and gas revenues.

Hydrocarbon production can generate significant windfalls in terms of export earnings, which – if they exceed the economy’s absorptive capacity – can cause inflationary pressures and an appreciation of the local currency, a phenomenon known to economists as the Dutch Disease. Moreover, oil and gas income is subject to price volatility and does not follow a predictable pattern. Since it is generated from the sale of an exhaustible resource, what is consumed today will not be available to a country in future generations.

The task for governments, then, is to avoid overheating the local economy and safeguard it from boom-bust cycles. This usually involves finding a way to smooth out fluctuations in current spending and delink it from the dynamics of commodity revenues. Diverting income into an SWF accomplishes this, while converting the extracted resources into a portfolio of assets that can provide sustainable income for future generations. 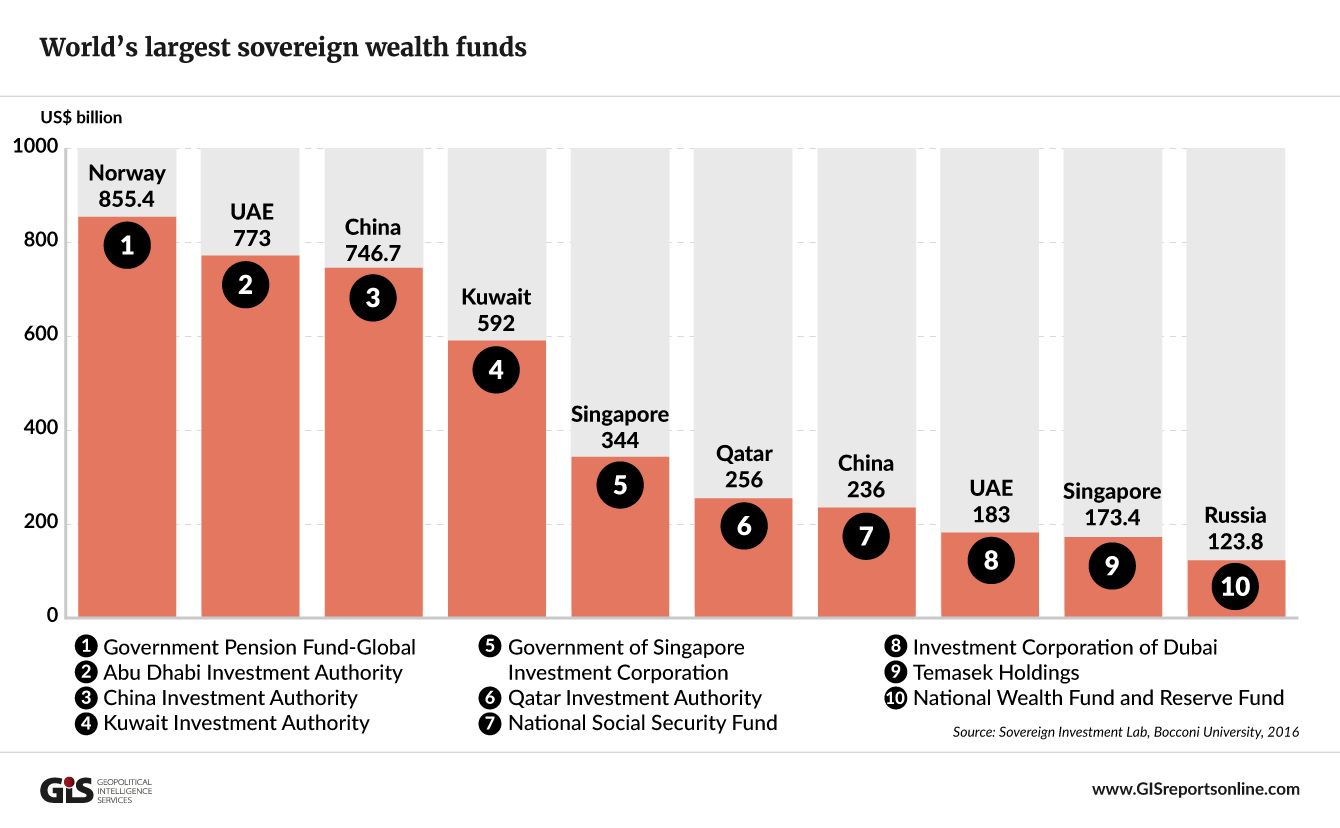 The literature identifies two chief categories of SWFs, depending on their most prominent functions. Stabilization funds, as the name indicates, attempt to insulate the economy from excess volatility in commodity prices. Examples include the Iran Oil Stabilization Fund (established in 1999), Venezuela’s Investment Fund for Macroeconomic Stabilization (founded in 1998 and known as FEM) and Algeria’s Fund for the Regulation of Receipts (also known as Fond de Regulation des Recettes, or FRR, established in 2000).

The second type of SWF, savings funds, convert the nonrenewable resource into a diversified portfolio of financial assets. The goal is to generate income flows from interest payments, dividends and asset appreciation that will pass on wealth to future generations. Examples include Equatorial Guinea’s Fund for Future Generations (2002), Kuwait’s Future Generations Fund (FGF) and the Alberta Heritage Savings Trust Fund (1976).

Many SWFs do not make a clear distinction between stabilization and savings, performing both functions. Trinidad & Tobago’s Heritage and Stabilization Fund is one example. Furthermore, some funds predominantly focused on savings often help stabilize the economy as well, particularly during periods of low oil prices.

Oil prices affect the performance of SWFs in two ways. First, their fluctuations expand or constrict the primary source of financing to the funds. A fall in the oil price, for example, will reduce the value of exports, all other things being equal, thereby restricting the accumulation of foreign exchange reserves.

Secondly, oil prices shape the investment and operational strategy of SWFs. Following the oil price slump in the summer of 2014, sizeable asset liquidations and withdrawals were noted in some sovereign funds. Norway, for instance, made its first-ever withdrawal from the GPFG in January 2016. Perhaps the most dramatic instance was the Russian Reserve Fund, whose value shrank from a peak of $142.6 billion in 2008 to just $32.2 billion in August 2016. Finance Minister Anton Siluanov warned that the fund could be depleted entirely by the end of the year if the government did not enact bold spending cuts. Similarly, according to the Financial Times, the $64.2 billion Kazakhstan National Fund may be completely drained by 2026 if current spending patterns continue and oil prices stay low.

Some commentators have argued that this asset liquidation has affected global financial markets. In fact, the correlation between stock indices such as the S&P 500 and oil prices has been unusually strong during the recent price downturn. But causation and correlation are two different things. SWF asset liquidations may have played a role in market movements, but their size is insufficient to explain these changes. According to the Sovereign Investment Lab, SWFs sold $22.5 billion of assets in 2015, of which $9 billion originated from commodity funds. That compares with a market capitalization of more the $18 trillion for the S&P 500.

Withdrawals from commodity-funded SWFs during periods of low prices are only to be expected. They should not be interpreted as signs of serious fragility, for several reasons.

Firstly, it should be remembered that the inflows and outflows from stabilization funds depend on whether revenues exceed or fall below a certain threshold. Such thresholds – say, a reference oil price – can be fixed or changed at the owner’s discretion. Thus, when oil prices exceed the threshold, SWFs accumulate a portion of petroleum revenue and invest them in foreign assets. When prices fall below the threshold, assets are sold to finance government expenditures.

This requires stabilization funds to maintain a certain degree of flexibility, since they can be called upon over short cycles and at short notice, when unanticipated price shocks hit the economy. In oil-dependent economies, stabilization funds typically invest in highly liquid assets, leading to them sometimes being called Sovereign Liquidity Funds.

For SWFs that perform more of a long-term savings function, the operational rules of accumulation and withdrawal can be different. Often, they depend on the government’s willingness to respect the fund’s original purpose. Usually, savings and spending are not so closely linked to oil prices. Norway, for instance, transfers all oil revenue to the GPFG and may only use the expected return on the fund (estimated at 4 percent) for general spending purposes. This keeps the fund’s capital base intact.

Norway’s management of the GPFG is exemplary. But the fund’s success and the government’s self-discipline go well beyond the operational rule; they are grounded in a well-established institutional framework, a broad revenue base and a long tradition of fiscal and monetary transparency. Such clear, enforceable rules tend to be lacking in many developing countries. Even when SWFs have operational rules, they are often not respected, as governments freely tap into their capital when socioeconomic and political conditions turn bad.

There is a sharp contrast between Norway, where the GPFG substantially mitigates geopolitical risk, and some developing countries that have depleted or mismanaged their SWFs, which could end up increasing it.

Much depends on the quality of a country’s institutions, the level of government spending and the size of the fund, along with whether alternative financing mechanisms are available.

In almost all highly oil-dependent economies, the possibility that the SWF could be depleted poses a problem of financial stability. Countries like Kuwait and the United Arab Emirates have accumulated such a large financial cushion that the prospect of depletion is distant. Others, such as Venezuela and Kazakhstan, are finding out the hard way what happens when the money runs out.

The countries in the best position have economies that can weather the storm, with or without their SWFs. Canada and the United States, for example, have strong fiscal systems that allow flexible spending and provide alternative sources of revenue.

As can be seen from the above, the future of SWFs is almost entirely dependent on the outlook, priorities and commitment of their state owners.

Shortsighted governments are likely to deplete their capital. Wiser states will take a long-term perspective, reinvesting oil revenue so that future income from financial investments will exceed that from oil exports. As part of this attempt to shield developing economies from the vagaries of commodity markets, the Sovereign Investment Lab reports that SWFs are increasingly emphasizing long-term diversification, rebalancing their portfolios toward illiquid assets such as real estate.

The focus on savings has acquired a new urgency as governments realize the long-term implications of climate change, which may reduce the future value of oil reserves.

But even the most prudent savings and investment policies mean little without policies to tame public spending and bolster non-oil sources of revenue. If the ambitious reforms proposed by major oil producers such as Saudi Arabia succeed, the wealth created from oil will stay long after oil’s importance to the economy fades away. That may be the only way for these commodity exporters to preserve a future role in global affairs, as their governments are increasingly coming to realize.

The article was first published on Geopolitical intelligence Services