AI and the global energy transition

Over the last two centuries, the world’s major energy transitions were driven primarily by technological breakthroughs. The steam engine allowed coal to fuel the Industrial Revolution and displaced traditional biomass in the world energy mix. Then the internal combustion engine opened the door for oil to dominate the transport sector and the global energy mix for decades – a position it still holds to date.

Today, one major development is still unfolding; its final impact is difficult to predict or even comprehend at this stage. Referred to as the Fourth Industrial Revolution,  digital transformation is evolving at a rapid pace. Although its roots can be traced back to more than 50 years ago, recent advances in computing power and algorithms as well as the increased availability of data have fueled the boom in digital technology. It is not fuel specific; on the contrary, it affects the way we produce and consume energy in all its forms.

The Fourth Industrial Revolution leverages a wide range of digital technologies, including the Internet of Things (IoT), mobility/cloud technologies and machine learning. Artificial intelligence (AI) especially is capturing notable attention nowadays and attracting significant investment. Interestingly, there is no universally adopted definition of what AI is.

The European Union defines AI systems as “software (and possibly also hardware) systems designed by humans that, given a complex goal, act in the physical or digital dimension by perceiving their environment through data acquisition, interpreting the collected structured or unstructured data, reasoning on the knowledge, or processing the information, derived from this data and deciding the best action(s) to take to achieve the given goal.”

If AI is indeed far superior to humans when it comes to carrying out complex tasks at speed, then its potential in supporting and accelerating the transition to a greener future while enhancing energy security cannot be overlooked. However, just like any new technology – particularly one that is still not fully understood – there are concerning challenges ahead. “The world has not had that many technologies that are both promising and dangerous the way AI is,” Bill Gates, the cofounder of Microsoft, once warned.

Foreseeing its benefits, governments around the world are racing to become leaders in the digital technology space, particularly AI. The German Energy Agency describes the current situation as a system rivalry, with the United States and China as established AI nations, while Europe is trying to counter these two heavyweights with an ethics-based approach to AI.

For the last 10 years, the U.S. has seen the largest venture capital investment in AI. In 2022, it is estimated that such investments would exceed those made in China, the EU, the United Kingdom, Israel, India, Canada, Singapore, Korea and Japan combined. But China is aiming to become the primary center for AI innovation by 2030, with an AI industry worth 1 trillion yuan (130 billion euros) and related industries worth 10 trillion yuan (1.3 trillion euros). In its New Generation Artificial Intelligence Development Plan (AIDP) published in 2017, the Chinese government describes AI as a major strategy to enhance national competitiveness and protect national security; it is also a new engine of economic development. 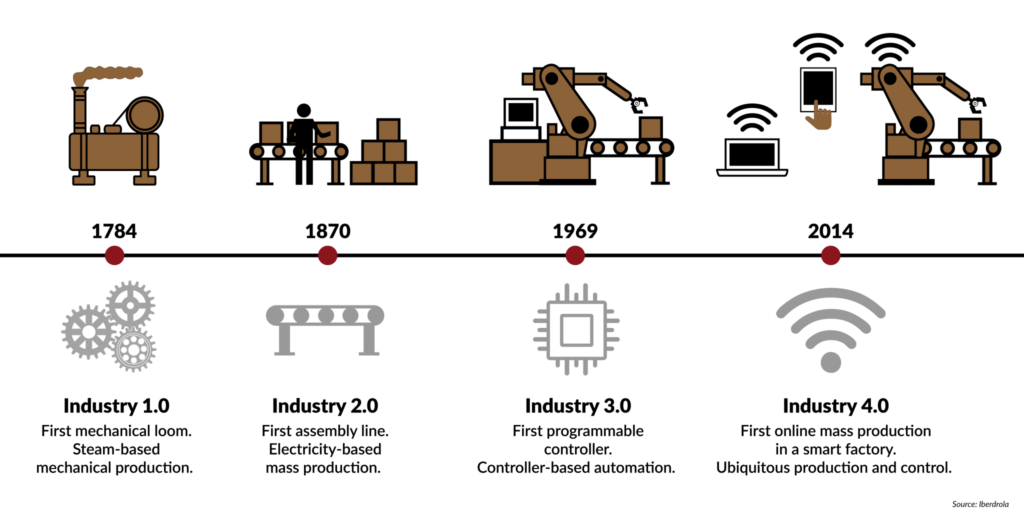 Meanwhile the EU is trying to carve out its own niche, announcing it would create global leadership in trustworthy AI. In its 2021 review of the Coordinated Plan on AI, the EU identified seven sectoral action areas where it can build strategic leadership – namely: environment, health, robotics, public sector, home affairs, transport and agriculture.

The race, however, is not limited to the usual suspects. In 2021, 44 countries created their own national AI strategic plan. For instance, in 2017, the United Arab Emirates unveiled its national strategy for AI, where it stated its intention to “build an AI economy, not wait for one,” with the goal of becoming one of the leading nations in AI by 2031. Three years later, its neighbor Saudi Arabia launched the National Strategy for Data and AI, aiming to position the kingdom as a global AI hub and ranking among the top 15 countries in AI. The OECD AI Policy Observatory lists more than 700 AI policy initiatives from 60 countries, territories and the EU, with the U.S. leading with 68 policy initiatives, followed by the EU (60) and the UK (55).

No wonder the market for AI is growing rapidly. According to Fortune Business Insights, the global market for AI is projected to grow from $387 billion in 2022 to $1.4 trillion by 2029, at a compound annual growth rate of 20.1 percent in the forecast period.

In energy, the applications of digital technologies and AI are diverse and cover the whole value chain – from supply to consumption and for all fuels. Many believe this innovation will improve the sustainability of the global energy industry and accelerate the deployment of green energy.

The United Nations’ Intergovernmental Panel on Climate Change (IPCC) argues in a 2022 report that digital technologies can help mitigate climate change and help achieve several sustainable development goals (SDGs). The report states that AI can improve energy management and efficiency, as well as promote the adoption of many low-emission technologies, including decentralized renewable energy. Similarly, the EU foresees the deployment of AI for a wide range of applications to achieve the goals of the European Green Deal.

Evolution of the world’s energy mix 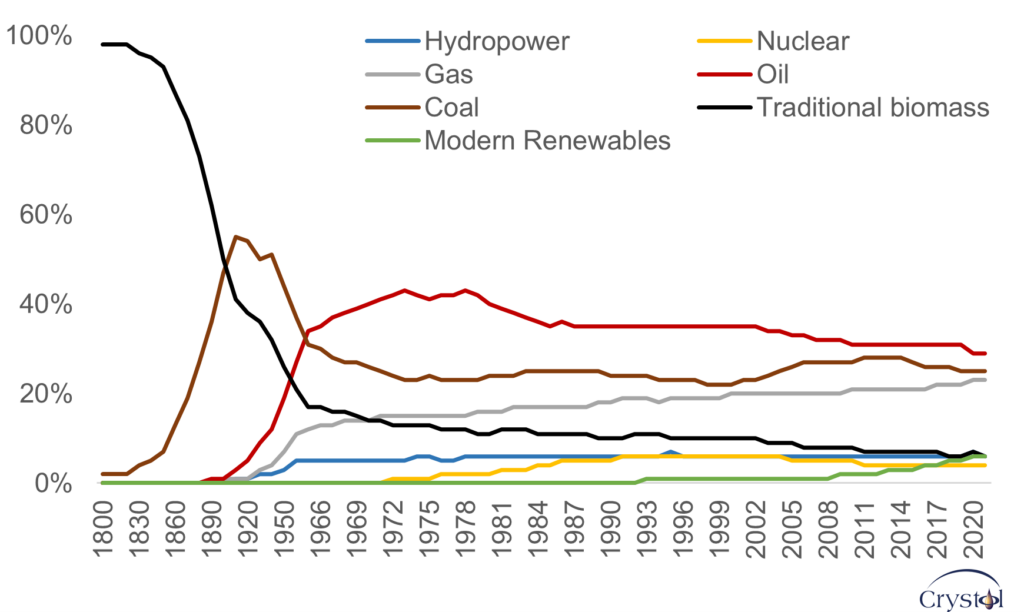 With its powerful predictive and forecasting capabilities – whether for maintenance, demand or weather – AI can lead to greater reliability of energy supply and grid stability. (Because of the intermittent nature of renewable energy, which often causes a mismatch between demand and supply, grid stability is crucial for the green energy transition.) It can also support the adoption of electric vehicles through various channels – from reducing cost through optimal battery-material design and manufacturing to estimating optimal locations for charging stations.

AI is also beneficial for conventional oil and gas. It is being leveraged not only in production to reduce operational risks and costs, but also to minimize the environmental footprint of the industry through more efficient and safer operations, as well as better monitoring of greenhouse gas emissions.

A report by consulting firm Ernst & Young showed that more than 92 percent of oil and gas companies are either currently investing in AI or plan to do so in the next two years. Meanwhile 50 percent of oil and gas executives say they have already begun using AI to help solve challenges at their organizations.

There is no shortage of studies on the benefits of adopting AI in the energy industry. However, its wide deployment gives rise to several challenges – some known, and some that will emerge as the technology is more broadly adopted.

One of the biggest concerns is cyber risk. Cyberattacks are happening probably more frequently than has been reported. The attack on the Colonial Pipeline in the U.S. last year caused supply shortages across the East Coast. Given the scale of the damage that even a short-lived outage can cause, energy infrastructure is particularly attractive for hackers.

Also, technology typically moves faster than regulations, which can slow implementation or result in regulatory gaps. The problem is particularly pronounced in less developed economies with limited administrative capacity but can also be observed in more advanced economies. The absence of comprehensive regulations can hold back both investment and utilization.

Then there is the issue of public mistrust, especially as AI builds on data sharing. For instance, a review of the European legal framework for AI, particularly with respect to  fundamental rights, data ownership and intellectual property, reveals tensions between protecting the rights of individuals and firms and encouraging innovation with trying to maximize transparency and openness.

There is also the unintended consequence of increasing energy use. A recent study by the EU warns of AI potentially hindering the attainment of climate change goals. Given the increasing relevance of AI technologies and their heavy use of data, their contribution to the energy consumption of information and communication technologies (ICT) is likely to rise significantly. Currently, around 5-9 percent of the world’s total electricity use is caused by ICT, which may rise to 20 percent in 2030, the study found.

The list of challenges is non-exhaustive. While this may delay the adoption of AI in the energy sector, its contribution to improving the way the world produces and consumes energy cannot be downplayed. The genie is already out of the bottle.

Global cooperation and collaboration across a wide range of stakeholders – from policymakers to energy companies and digital technology providers, as well as open dialogue including the public – will be key for the beneficial deployment of AI.