While it is impossible to predict how and when breakthrough technologies will emerge, there are methods that were developed years and even decades ago that hold great promise. This is the case with certain energy storage technologies that are currently being refined for mass deployment and more cost-effective use.

According to the European Patent Office, patenting in low-carbon emitting supply technologies such as renewables (wind, solar, geothermal or hydroelectric power) has been falling since 2012 and accounted for only 17 percent of all clean energy technology patents in 2019. Since 2017, the key drivers of innovation in this sector have been technologies that cut across these fields, like batteries, hydrogen and smart grids, as well as carbon capture, utilization and storage (CCUS). These crucial enablers of the energy transition all involve some form of energy storage.

Technically speaking, all these technologies are already being used. However, their mass deployment has been hindered because of economic challenges. Should their commerciality significantly improve, and should they receive sufficient regulatory and popular support, then these technologies hold the most potential to change the global energy landscape in the coming decade or the next. 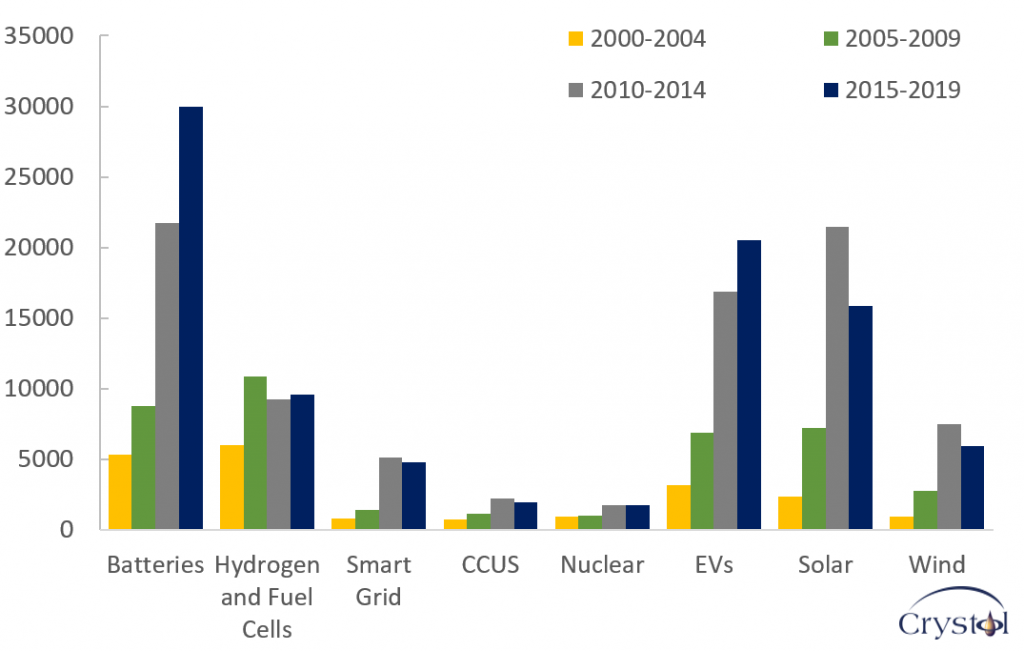 The future is electric

There is a general consensus that electrification of large parts of the economy is essential to reach long-term climate goals. According to the International Energy Agency (IEA), to achieve net-zero greenhouse gas (GHG) emissions – with the amount emitted being fully neutralized by the amount taken out – the share of electricity in final energy consumption should increase worldwide from 20 percent today to 49 percent by 2050. Moreover, the share of renewable energy in the power sector should increase from 20 percent to a staggering 88 percent by 2050.

Without storage, electricity needs to be consumed as soon as it is produced. This makes matching supply and demand difficult – and the challenge will only increase the more the world relies on renewable sources. For instance, households need more electricity in the evening, when the sun is not shining. Scaling up renewable energy therefore requires backup fossil fuel-based power plants to compensate for variability and intermittency problems. However, by storing energy produced by the sun or wind for later use, the transition to green energy becomes much more accessible.

No wonder energy storage is receiving significant attention. In particular, the use of batteries as an energy storage system is seen as one of the most disruptive technologies in the sector. Once commercial applications can be implemented at a large scale, it will have the potential to transform the global energy mix and dramatically accelerate the green energy transition.

The concept of a battery is simple: store energy now for later use, thereby creating a flexible and resilient energy system. While the principle dates back to more than 2,000 years, the energy transition requires more sophisticated batteries. The United Kingdom’s National Grid explains: 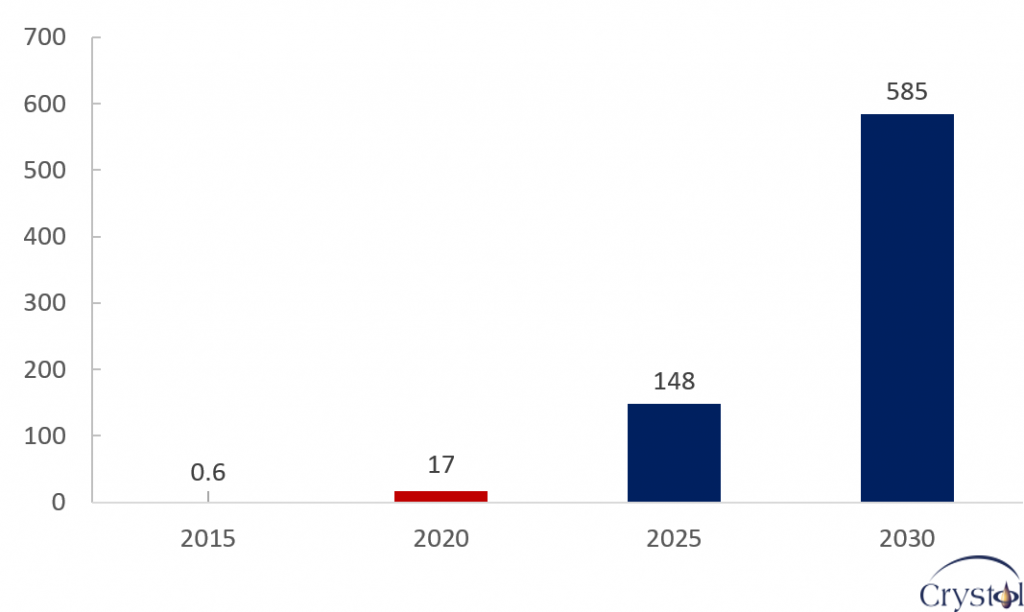 Between 2015 and 2020, the global installed battery storage capacity increased by a compound annual growth rate of 95 percent to reach 17 gigawatts, with around 60 percent of the additions made in China and the United States. However, according to the IEA, to achieve net-zero emissions, battery storage should increase ninefold between 2020 and 2025 and 34 times between 2020 and 2030.

To date, the application of battery storage is most advanced in the transport sector. Although implementation at the grid level is going at a much slower pace, it is also attracting significant attention and capital. Batteries are one element of the smart grid, as they handle the overproduction or underproduction associated with renewable energy.

They also require specific chemicals. Today, thanks to their adoption by the automotive industry, lithium-ion batteries, also known as Li-ion, have acquired a notable advantage in terms of how much energy they can store and deploy. Such batteries are also the dominant storage technology for large power plants.

The use of these batteries in electric vehicles (EVs) has also drastically reduced their cost. One study found that the real price of Li-ion cells, scaled by their energy capacity, has declined by about 97 percent since their commercial introduction in 1991. However, the study concludes that their deployment is still relatively limited, and their broader adoption will depend on their potential for further cost reduction and performance improvement. And further reduction in cell costs may be harder to achieve than previous ones. The capital cost of the battery system is only part of the overall energy storage cost equation.

“Along with the storage device, there are costs associated with the battery management system, power conditioning, and integration, and soft costs associated with the installation of systems. As a result, while there have been major reductions in battery pack costs, similar reductions will be required with other components … that constitute an energy storage system,” one study concludes. Furthermore, many fear that the rise in the price of minerals needed for the production of batteries may create upward pressure on their cost and hinder their development. The recent increase in the price of lithium due to rising demand is one example.

Despite the prominent role it is expected to play in the energy transition, electricity alone cannot decarbonize entire economies, as the IEA rightly argues. The general consensus among various forecasting agencies is that even under the most aggressive climate change scenarios, fossil fuels will continue to contribute to the world’s primary energy mix at least for the next two decades. This reality lends particular importance to CCUS technologies, which capture CO2 emissions from the atmosphere to store or reuse them.

Almost all net-zero IPCC and IEA models involve CCUS as an integral part of the plan to stay below the 1.5 degrees Celsius global warming limit. The IEA acknowledges that “reaching net-zero will be virtually impossible without CCUS.” This is music to the ears of the oil and gas industry, as the technology extends the shelf life of fossil fuels by helping reduce their carbon footprint. Nearly every major oil and gas company is interested in CCUS, creating additional momentum.

However, just like battery storage, the application of CCUS needs to expand exponentially to achieve the net-zero target. The IEA estimates that around 2.5 gigatons (Gt) of CO2 will need to be captured and stored every year by 2040, rising to 4-5 Gt per year until 2050. Currently, just 40 megatons (Mt) of carbon dioxide is stored each year. The industry-led Oil and Gas Climate Initiative (OGCI) argues that, although there are more than 30 industrial-scale projects in planning and investment has doubled since 2017, around 20 times that amount is needed over the next decade to keep climate goals on track.

Also, like battery storage, cost remains a central issue. CCUS has been around for decades. The first large-scale CCS initiative, the Sleipner project off the Norwegian coast, came on stream in 1996. The industry knows how to implement the technology, and it continues to improve. But there is no cost-effective application yet. 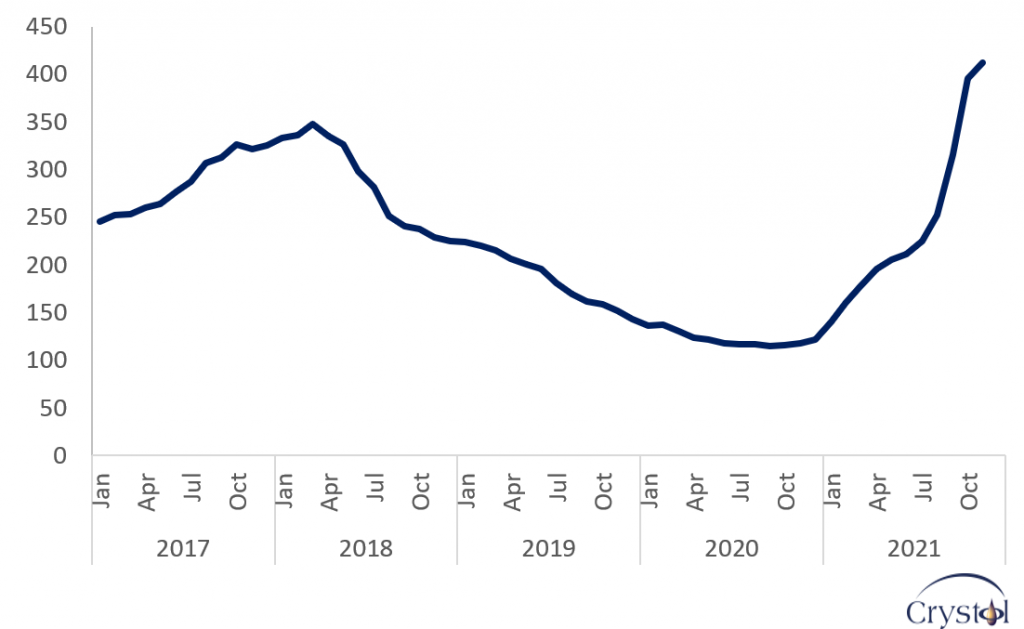 There is a clear difference between what is technically feasible and what is commercially doable. Many technologies that can help decarbonize the world’s energy system have been developed, tested and used over the last decades, but they are yet to reach mass deployment. The main hurdle has been cost. This is why no discussion about the outlook of energy technologies would be complete without addressing carbon pricing.

The current energy transition is being driven by changes in preferences, not by a major overhaul to our production system as was the case with coal during the Industrial Revolution. Nor is it driven by the same market mechanism that led to the entry and rise of oil into the global energy mix. In this respect, transitioning to a less carbon-intensive system will not be possible without a change in consumer preference. Furthermore, the global energy system is so expensive and complex that a higher carbon price – whether through carbon taxes or cap-and-trade systems – remains the key ingredient for decarbonization to start in earnest.

To make a meaningful contribution to the climate change race and achieve the ambitious targets set by governments around the world, the price of carbon would need to be set well above $100 per ton by 2030. But this is highly problematic for policymakers. In 2019, when Germany announced its carbon tax would be 35 euros per ton as of 2025, it was fiercely criticized by climate pundits. However, then German Chancellor Angela Merkel bluntly answered that “we need to bring the people along with us.” The green technologies that will drastically change the energy landscape in the coming years are the ones that will not only be technically and commercially viable, but also socially acceptable.