All eyes on Iranian oil

Oil markets have been on an unprecedented roller coaster over the last two years. On April 20, 2020, prices reached a bottom low, with the American benchmark West Texas Intermediate (WTI) hitting nearly minus $40 a barrel. Then in early March 2022, oil prices climbed to levels not seen since March 2012 for Brent and May 2008 for WTI, at $128 and $123 respectively.

When the Covid-19 pandemic began, around 20 percent of global oil demand disappeared virtually overnight. While it has significantly recovered since, today markets are bracing themselves for a major supply shock caused by Russia’s invasion of Ukraine.

The initial round of international sanctions spared Russian oil exports. Later, Canada, the United States and the UK imposed embargoes on Russian oil imports. The American embargo will be effective as of April this year. The UK will gradually reduce its dependence on Russian oil to reach zero by the end of the year. Neither of these countries, however, import significant quantities of Russian oil. 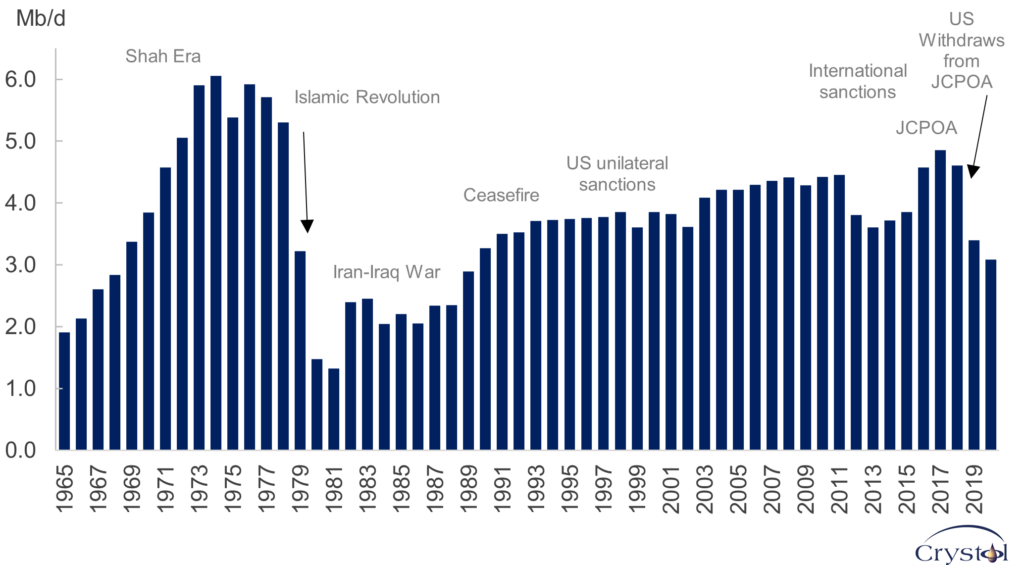 Still, given the global nature of oil markets, the mere thought that the world’s second-largest oil exporter after Saudi Arabia could be significantly disrupted is causing panic attacks. The International Energy Agency (IEA) fears a global oil supply shock from large-scale disruptions to Russian oil production. It estimates that from April, 3 million barrels a day (mb/d) of Russian oil output could be shut in as sanctions take hold and buyers shun exports. International traders have increasingly shied away from Russia’s oil to avoid becoming entangled in the complicated quagmire of sanctions. Nor do they want to be seen as indirectly funding the war.

The market is desperately looking for another sizeable and readily available alternative. The main source that could tick those two boxes is Iranian oil, which has been mostly sitting idle since 2018 due to U.S. sanctions. While the impact of capitalizing on those barrels will be difficult to quantify, it can surely defuse tension – especially when combined with other market dynamics.

Despite decades of sanctions and limited investment, Iran remains one of the 10 largest oil producers in the world, ranking eighth after the U.S., Saudi Arabia, Russia, Canada, Iraq, China and the United Arab Emirates, and fourth in OPEC.

Iran faced two rounds of sanctions over the last decade, with a relatively short-lived two-year detente in between. The oil sector was the hardest hit. Following the imposition of international sanctions in 2012 in response to Tehran’s nuclear enrichment program, production and exports decreased. Iran’s market share, both globally and within OPEC, shrank accordingly. The new restrictions erased most of the gains the country had achieved since the 1990s, after tough sanctions had been imposed by U.S. President Bill Clinton as part of the Iran and Libya Sanctions Act.

Iran and six world powers – China, France, Germany, Russia, the United Kingdom and the U.S. – reached a nuclear deal in 2015, the Joint Comprehensive Plan of Action (JCPOA). Sanctions were lifted and Iran’s oil production recovered at an impressive rate. Within a year, production increased by 800,000 barrels per day (b/d) and in 2017 it exceeded pre-sanctions levels. Iran restored its market share and became the world’s fourth-largest oil producer in 2017, after the U.S., Saudi Arabia and Russia.

However, newly elected American President Donald Trump, who described the JCPOA as the “worst deal ever,” withdrew from the agreement in May 2018 and reimposed unilateral sanctions on Iran. In October 2020, production reached its lowest level since 1989.

Production has slightly recovered since but remains at lower levels than those seen during the first round of international sanctions. This could mean a stronger rebound when the current sanctions are lifted, especially since production has not been curtailed for long enough to cause serious technical problems or damage oil fields. 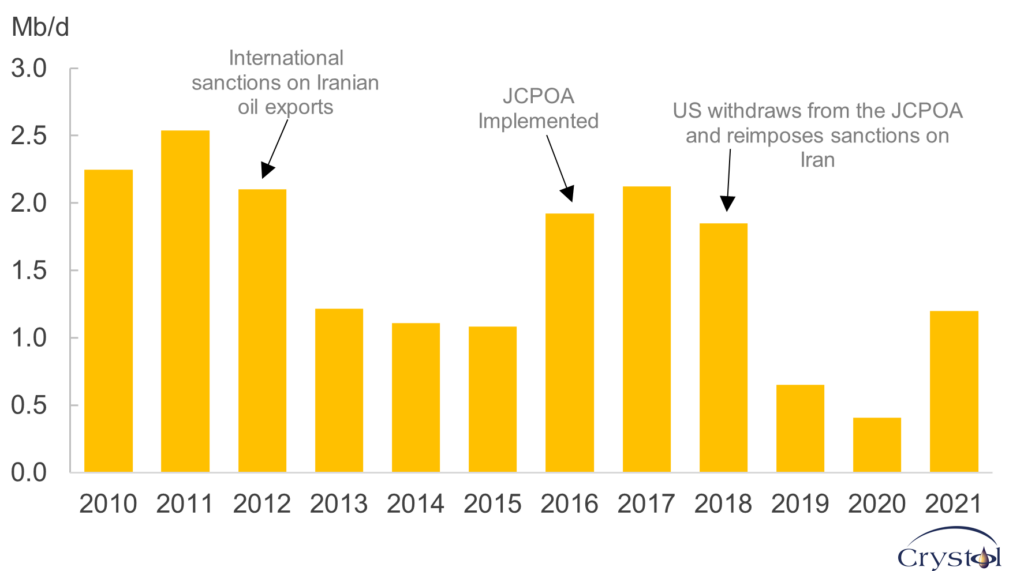 When the JCPOA became effective in 2016, Iranian oil exports ramped up rapidly, with the main destinations being the Asia-Pacific and Europe. Under the 2018 sanctions, exports declined to under 500,000 b/d, publicly available data shows.

The Trump administration wanted to apply “maximum pressure” on Iran and aimed to reduce Iran’s oil exports to zero. Its measures were more successful than the first round of international sanctions, but still failed to achieve their extreme target. Iranian oil, albeit significantly diminished, continued to flow – primarily to China.

On February 18, 2021, the Biden administration took a major step and offered, together with its European partners, to reopen talks with Iran for the first time in four years. The Iranian response has been to demand that U.S. sanctions be lifted before they rejoin any nuclear negotiations. Meanwhile, taking advantage of a more lenient U.S. administration, Tehran has been gradually increasing its exports.

Several rounds of negotiations have taken place. On March 5, 2022, Russian ambassador Mikhail Ulyanov told reporters: “We will have a deal maybe in the middle of next week. We are talking about the last efforts before crossing the finish line.” However, this was not the first time that the ambassador had sent optimistic signals, only to be followed by a no-deal outcome.

A few days later, the ongoing round of negotiations was unexpectedly hijacked by Russia itself, which demanded a U.S. guarantee that the sanctions it faces over the Ukraine conflict would not hurt its trade with Tehran. Such a move dissipated market hopes that a deal could be reached any time soon. It further confirms that Russia is intentionally trying to hold oil markets hostage.

Russia’s demands reflect the impact Iranian barrels could have. In an extremely tight market, any additional barrels will defuse some of the pressure. Even if Iranian oil takes a while to hit the market, mere expectations of additional supplies will soothe nerves. This could also explain why OPEC+ has not acted on its much-trumpeted principle of maintaining market stability and has so far resisted injecting more supplies into the market on top of its 400,000 b/d monthly additions

However, many uncertainties remain and any attempts to quantify the impact come with major caveats. For instance, if a comprehensive deal is reached, Iranian officials have ambitiously stated that Iran could ramp up production to reach its maximum capacity within two months, providing around 1.4 mb/d. Iran’s former Minister of Petroleum Bijan Namdar Zangeneh even mentioned a production target of 6.5 mb/d; “Iran could easily boost its oil production capacity” to that level, he said in May last year.

Rounds of negotiations with Iran under the Biden administration 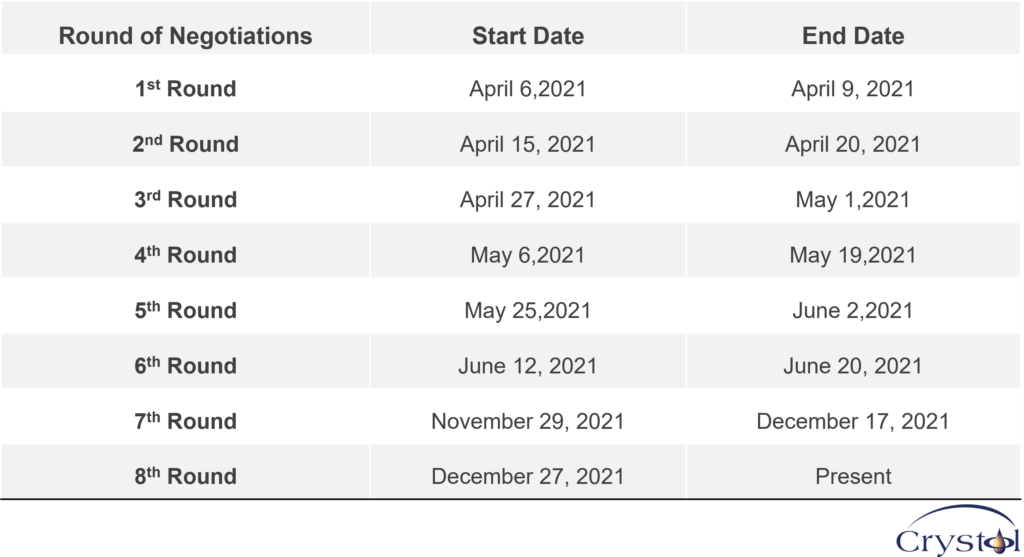 Third-party expectations are much more conservative, forecasting a gradual increase in production that could span over nine months. In its February 2022 monthly oil market report, the IEA predicted that “a further 1.3 mb/d of Iranian crude supply could gradually be brought to market should sanctions be lifted” in 2022.

This lack of consensus results from the oil trade being perhaps the most opaque activity in the sector’s supply chain. Furthermore, after decades of sanctions, Iran has mastered the art of evading restrictions. Publicly available export data does not necessarily reflect what is already being traded.

The market currently fears the worst-case scenario, namely losing nearly 5 mb/d of Russian oil exports. This would leave a big hole to fill, with consumers facing even higher prices. Comparing that figure with what Iran can bring to the market, it becomes obvious that Tehran alone can bring only mild relief.

However, oil markets are far from static. The longer prices remain elevated and the higher they go, the more supplies will come to the market. Although individually these additions may not appear significant, overall they will make a notable difference.

Demand will eventually respond by going in the opposite direction. After all, each major oil crisis has resulted in structural demand destruction that never recovered even when prices declined. The problem, however, is that demand destruction is not immediately noticed. No one knows at what price level it starts to kick in. Add to that the growing risk of a serious deceleration in the global economy, courtesy of commodities-fueled inflation, and a different picture emerges. Sustainably high oil prices can be as or even more detrimental for producers than for consumers. Like on a roller coaster, a vertiginous descent can follow. It is only a question of time.

“What a nuclear deal with Iran would mean for oil prices“, Dr Carole Nakhke, Jan 2022

“Iran and the West: What will happen if a deal is reached?“, Dr Carole Nakhle, Dec 2021