Oil market outlook: Land in sight but rough seas ahead

In November, new vaccines showed great promise in fighting Covid-19, and the exhilaration was clear in markets around the world.

However, the enthusiasm was not sustained. Many experts and political leaders rushed to warn that while a vaccine could mean the end of the health crisis, the economy – and oil markets in particular – are still in for a rough ride. The previous mechanism whereby the virus drove the economy, which in turn determined oil demand and therefore prices, appears to have been broken.

The good news is that the world is not sailing in the dark anymore. Lights have been spotted. However, until the ship reaches the shore, many risks remain. The sea can still turn rough and the land in sight may turn out to be unfamiliar territory. 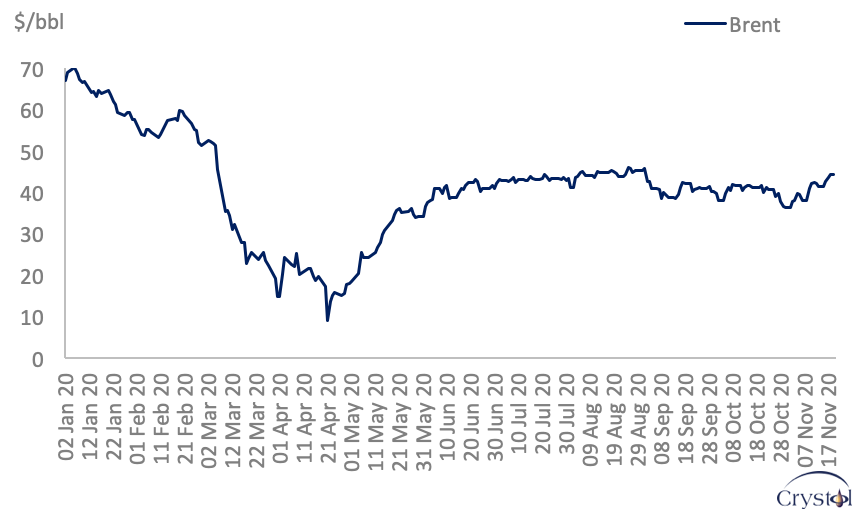 On November 9, only a few days after the elections in the United States, German company BioNTech and American pharmaceutical giant Pfizer announced that their vaccine candidate was more than 90 percent effective in preventing Covid-19. “Today is a great day for science and humanity,” said Pfizer chairman and CEO Dr. Albert Bourla.

Although the companies have not yet revealed the results of the safety trial, the impact of the news was obvious in financial markets, perhaps foretelling what will happen once the pandemic is officially brought under control. Stock market screens turned green after being dominated by red for months. Oil prices and energy stocks were no exception. Prices for both Brent and West Texas Intermediate (WTI) crude rose by 10 percent overnight and the stocks of major oil companies also saw notable gains.

A week after the Pfizer-BioNtech announcement, U.S. company Moderna announced that its own vaccine was nearly 95 percent effective, marking yet another “great day,” to quote Tal Zaks, the firm’s chief medical officer. This time, however, the market reaction was tamer.

There was no shortage of commentary on possible delays in distributing the vaccine. Political leaders such as British Prime Minister Boris Johnston cautioned that “there is a long way before we have got this thing beat,” while U.S. President-elect Joe Biden stated that the end of the pandemic is still many months away, adding “today’s news is great news, but it doesn’t change that fact.”

Central bankers across the Atlantic joined the ranks. U.S. Federal Reserve Chair Jerome Powell warned that it was too soon to assess the vaccine’s impact. European Central Bank President Christine Lagarde expected the recovery to be nonlinear: “rather unsteady, stop-start and contingent on the pace of vaccine rollout.”

In oil markets, the International Energy Agency confirmed that its forecasts do not anticipate that the vaccine will affect the market in the first half of 2021. “Vaccines are unlikely to significantly boost demand until well into next year,” the agency said.

OPEC+ announced that new technological developments, as well as signs of robust oil demand in Asia, have been overshadowed by new lockdowns, particularly in Europe. Accordingly, OPEC downgraded its forecasts for oil demand growth for 2021 by 300,000 barrels per day in its November oil market outlook. 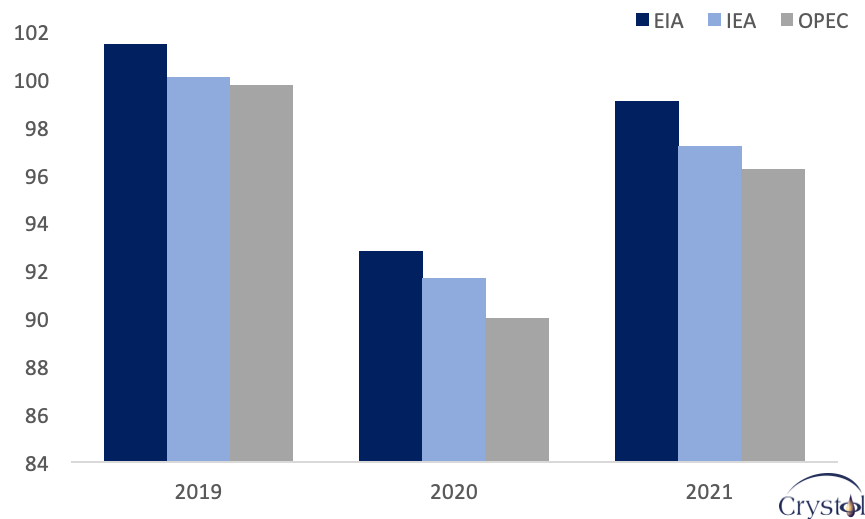 Such overwhelmingly consistent warnings are a stark contrast to more upbeat attitudes earlier this year, when a V-shaped recovery for the global economy and oil demand was still expected by the end of this year. The consensus today is that recovery will take more time, and its shape is uncertain.

Earlier forecasts were built around a clear hierarchy. Covid-19 was driving the economy, which in turn was determining oil demand and subsequently affecting prices. In other words, if the disease was under control, the economy would improve, oil demand would be restored to its pre-coronavirus days, and oil prices would increase accordingly.

This unidirectional relationship, however, is bound to weaken. The global economy will start to face structural changes that will induce adjustments independent of the state of the global pandemic; and oil markets will likewise experience changes not necessarily related to the state of the economy.

The infection continues to spread at unprecedented speed yet the global economy is not worsening. Meanwhile, oil prices appear to be stuck in the same limited corridor ($40-45 per barrel, for Brent) since June. OPEC+ has successfully created a price floor, but it has struggled to increase prices despite record production cuts. The vaccine announcements have not made any substantial difference to oil demand outlook, and oil prices have remained in the same monthly range.

Such developments could be a sign of path dependence, which in economic theory refers to choices based on transitory conditions that persist long after the circumstances have changed. Path-dependent processes are nonlinear and can lead to multiple outcomes. If distortions caused by the pandemic last long, post-Covid economy and energy markets could differ significantly from the status quo ante.

Despite the sobering advice, a glimmer of hope has appeared. The end of the current health, economic and oil crisis is in sight. However, the time frames are not aligned, and the hierarchical relationship from the virus to the economy to oil markets will dissipate. While the pandemic may be under control before the end of next year, the same cannot be said of the economy and oil markets, which each face their own set of troubles.

The challenges for oil producers will not dissipate any time soon, with or without a vaccine. Demand may fail to pick up as expected. Oil inventories are heavily bloated. For the excess to be absorbed, the market needs stronger demand growth and weaker growth in supply – and neither is guaranteed.

Meanwhile, OPEC’s spare crude capacity is high, which, as experience confirms, will increase pressure on the group’s overall compliance at a time when several members continue to produce above their allocated quotas. The United Arab Emirates, OPEC’s third-largest producer, has recently expressed its frustration with the uneven compliance across members, and (unofficially) threatened to leave the group after more than 50 years of membership. With new oil coming to the market – particularly from Libya, which, although an OPEC member, has been exempt from any cuts – it is easy to appreciate the scale of the challenge facing the production group.

The more additional supplies there are, the harder it becomes for OPEC+ to achieve its goal. Oil price recovery will be difficult to engineer and may take longer than predicted even if demand starts to recover. Oil markets could begin behaving independently of economic recovery.