Home to six of the 10 poorest nations globally, East Africa has long captured the world’s attention for the wrong reasons. But since a series of massive offshore energy discoveries in Mozambique and Tanzania in 2010 and thereafter, the region’s fortunes are being recast.

Mozambique LNG, one of the main gas projects in the country, led to a $20 billion Final Investment Decision (FID) in 2019 – a year in which the country’s gross domestic product (GDP) was $15.39 billion. Several big names in the oil and gas industry are already there, including the French TotalEnergies, Italian Eni, Norwegian Equinor, American Exxon and the Chinese state-owned China National Petroleum Corporation (CNPC).

Although Mozambique’s first LNG exports are expected to be delivered in 2022, sizeable volumes will hit the market by 2026. While the economic boon to the region is clear, introducing East African LNG to global markets will also boost international gas trade, particularly benefiting importers. The energy crisis that emerged during the pandemic and that was exacerbated by the war in Ukraine has given East African gas greater appeal.

According to the International Monetary Fund, countries like Mozambique and Tanzania may benefit over the medium term from Europe’s efforts to diversify its energy sources and thus see stronger export demand from the region, especially given the European Union’s recent decision to classify gas as sustainable. Further, in its RePowerEU initiative released in May, the EU described sub-Saharan Africa as a region with “untapped LNG” potential, and as a partner to help reduce its dependence on Russian energy supplies.

Optimism over these developments should come with some caution. Security risks continue to pose the biggest hurdle to the region fully living up to its potential, alongside a weak institutional framework that may come under further stress by the sudden inflow of riches.

LNG projects in Mozambique and Tanzania

The 2010 discovery at the Windjammer gas field by the American firm Anadarko opened a new chapter for both East Africa and global LNG markets. It kicked off a series of finds in the region over several years, resulting in around 3.4 trillion cubic meters (tcm) of proven natural gas reserves for both Mozambique and Tanzania – just under 2 percent of the world’s total.

Mozambique holds the lion’s share of the region’s reserves, with 2.8 tcm, which places it third in Africa, after Nigeria (5.4 tcm) and Algeria (4.3 tcm), and ahead of Egypt (2.4 tcm). That figure is also on par with other major gas producers such as Azerbaijan (2.8 tcm) and Kazakhstan (2.7 tcm). Mozambique has larger reserves than LNG exporters like Norway (1.5 tcm), Australia (2.4 tcm), and Malaysia (0.9 tcm). 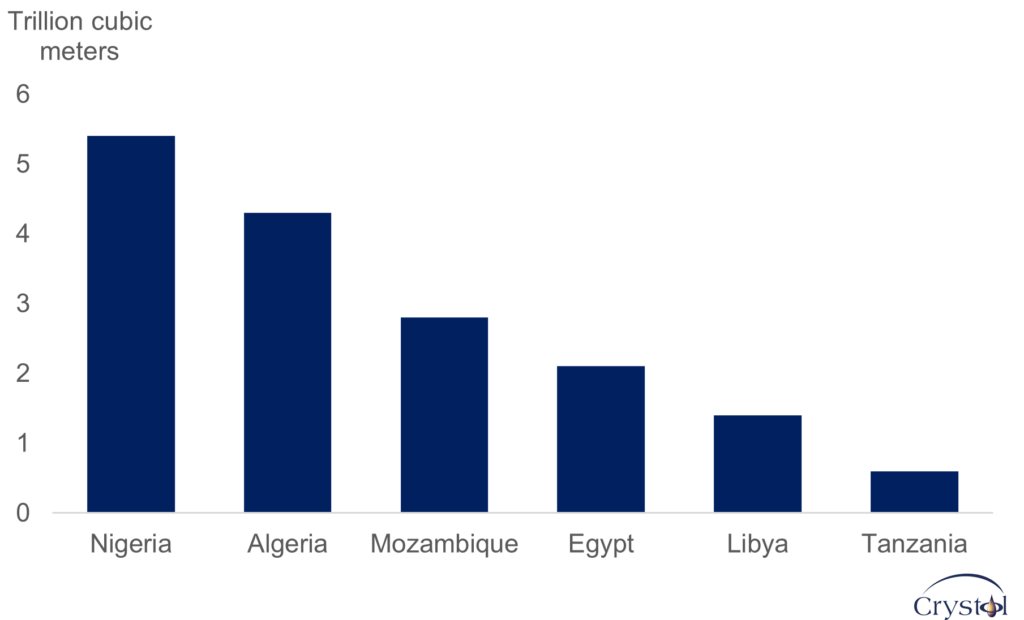 As domestic gas markets in Mozambique and Tanzania remain small, monetizing these countries’ natural gas reserves will basically consist of exports. According to the International Gas Union’s World LNG Report, Mozambique will be the fourth-largest country to benefit from additional LNG capacity between 2022-2026 after Russia (although the status of upcoming projects is uncertain amid the Ukraine conflict), Qatar and the United States. These additions to capacity will place Mozambique among the top 10 exporters of LNG over this period, surpassing important existing exporters like Egypt.

Tanzania also has substantial gas reserves and had hoped to start constructing its LNG export terminal in 2022, with exports expected by 2028. However, in January 2021, project leader Equinor pulled out, citing “poor” project economics. The effort faced several setbacks due to Covid-19, which pushed companies to slash investment, and saw several failed rounds of negotiations between the government and project partners.

However, prospects for the terminal received a boost after the March 2021 election of a government friendlier to investors. In June of this year, the new administration signed a framework agreement with Equinor and the United Kingdom’s Shell that is set to initiate the construction of the LNG terminal to commercialize the country’s deepwater offshore gas reserves. 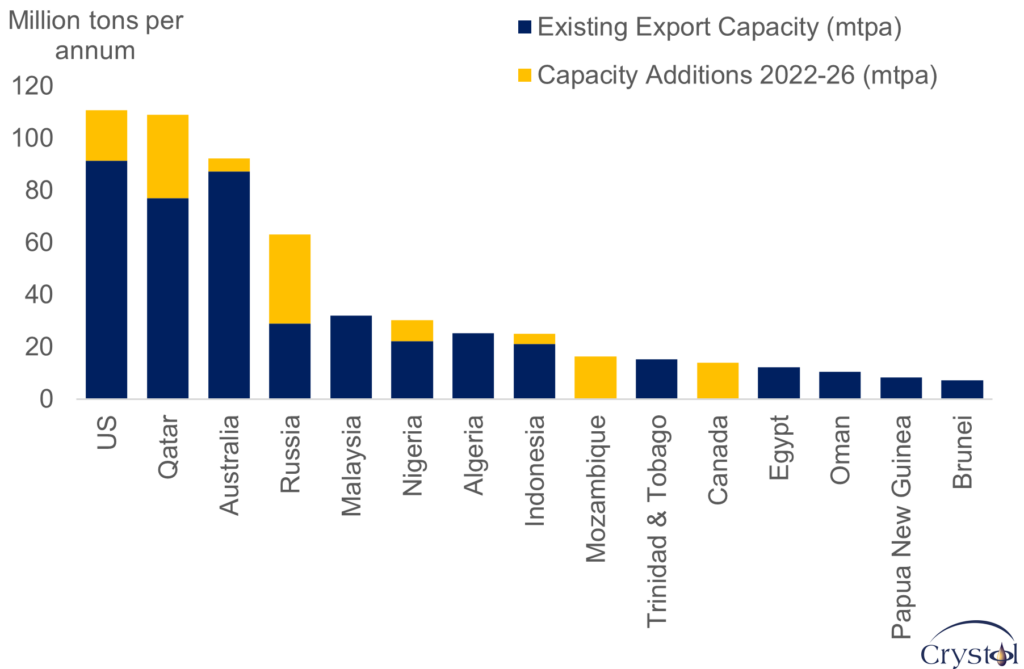 The appeal of East African natural gas to international investors does not only stem from the volumes involved; project economics are equally important. For instance, LNG projects in Mozambique have one of the lowest breakeven prices – the price of gas needed to cover costs – in the world. Although the same cannot be said of Tanzania, the election of a more pro-business government and the rise in LNG prices have improved the competitiveness of the country’s gas.

East Africa’s geographic location should also lift its export potential, with easy access for cargos to key gas markets in Asia and Europe. For instance, LNG cargo coming from East Africa will cross fewer chokepoints than one from Qatar, and travel a shorter distance compared to American or Australian equivalents. The development of gas markets within Africa would be a further boon to the region.

Already, 75 percent of the export capacity of the Mozambique LNG project has been sold to buyers from key regional markets in Europe and Asia under long-term purchase contracts – even before the completion of the export facilities. 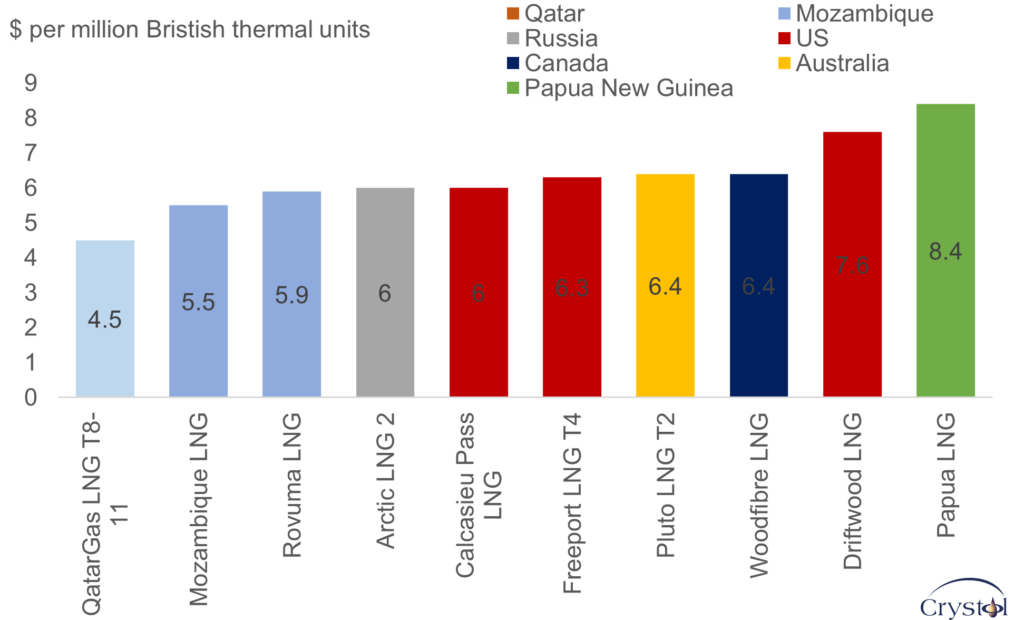 While favorable economics surely make East African LNG attractive to international buyers, it is difficult to declare the region a reliable supplier, for several reasons.

Security is a major factor, particularly in Mozambique, where it can hamper operations and delay the completion of export facilities. In April 2021, for instance, TotalEnergies declared force majeure on its LNG project in Mozambique and had to evacuate its workforce after terrorist attacks near its facilities.

An unstable domestic policy framework is another challenge. For instance, gas in Tanzania was expected to initially begin flowing by 2020. However, laws passed in 2017 forced energy companies to renegotiate their terms with the Tanzanian government, creating uncertainty for international investors and souring their relationship with host authorities.

There is also the danger of the so-called resource curse – whereby the flow of new wealth into a country fails to translate into sustainable growth, and instead fuels corruption, weakens institutions and increases political fragility and conflict. The risk is pronounced in countries lacking strong institutions at the time of oil and gas discoveries, as is the case in East Africa.

On balance, the region’s standing in the growing global LNG market is not insignificant, and has received a considerable boost following the war in Ukraine and the EU’s quest for new gas exporters. However, policy reforms in both Mozambique and Tanzania would be necessary to count them as reliable LNG suppliers.