North Africa’s natural gas: No panacea for the EU

North Africa’s role in the natural gas trade should not be underestimated. By starting the sale of liquefied natural gas (LNG), North Africa helped to redefine the way gas is sold, which, until then, was confined to pipelines. The first commercial LNG cargo took off from Algeria’s Arzew plant to the United Kingdom and France in 1964. Today, sales of gas by LNG exceed those by pipelines.

Back then, Algeria accounted for about 80 percent of Africa’s entire production and remains its largest producer and exporter today. Together with Egypt, Africa’s second-largest gas producer, Algeria accounts for 60 percent of Africa’s total gas production. They also account for 69 percent of the continent’s gas exports, with Europe being their leading destination. No wonder North Africa has been discussed as a potential source of additional gas supplies to alleviate Europe’s exposure to disruptions in Russian supplies and support the European Union’s quest to end dependence on Russian gas.

However, while the gas resources are available, above-ground factors have curtailed North Africa’s export potential. Unless investor-friendly policies are pursued and local demand growth is addressed, a significant increase in Algeria’s export should not be expected in the next few years. Longer-term, the country’s exports may even decrease. Egypt’s outlook may be brighter, especially as it tries to capitalise on supplies from Eastern Mediterranean countries, but it is a relatively small player in Europe. On balance, the European Union should be conservative in assessing North Africa’s future role in its gas market.

Gas production in Africa has expanded significantly since 1970: from 0.3 percent of the global output to about 6 percent in 2020 when it reached 231 billion cubic meters (bcm) per year. Two countries have driven that growth: the leader Algeria, which accounts for 35 percent of the continent’s gas production, and Egypt, the second-largest producer with a share of 25 percent. After Nigeria, Algeria ranks second and Egypt third when it comes to proven gas reserves on the continent.

Consumption is also concentrated in those two countries. Egypt is Africa’s largest gas market, accounting for 38 percent of the continent’s consumption (58 bcm), followed by Algeria with 28 percent (43 bcm). Together, they make up 66 percent of African consumption.

Despite the considerable domestic market, Algeria continues to be Africa’s largest gas exporter. In 2020, Africa exported 82.5 bcm of gas, or 9 percent of global gas trade, of which nearly half was Algerian exports, mainly to Europe. Europe received 83 percent of African gas exports, not surprisingly given geographical proximity. It makes North African gas more cost-competitive than gas from the United States, Australia, or even West Africa.

North African gas exports also meet around 7 percent of the European gas consumption (39.5 bcm), with Italy and Spain accounting for the lion’s share and France and Turkey receiving the remainder.

On the country level, the gas trade follows different paths. Algeria, for instance, exports most of its gas (63.5 percent) via pipeline, the rest through LNG. In both cases, Europe is the primary recipient. Italy and Spain take 98 percent of Algerian pipeline gas exports. Algeria is the biggest gas supplier to Spain, meeting nearly 30 percent of the country’s gas needs. It is also the second-biggest gas supplier to Italy after Russia, providing 21 percent of the country’s needs. In May 2022, Italy and Algeria reached an agreement on higher gas deliveries, which would allow Algeria to overtake Russia as Italy’s leading gas supplier in the next two years. 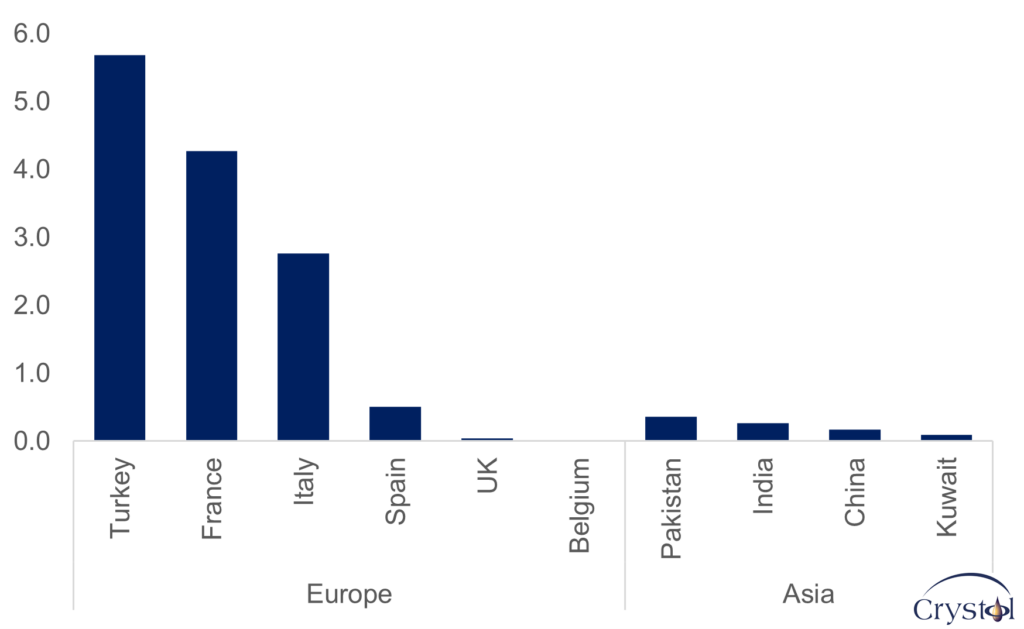 Unlike Algeria,  Egypt has no pipeline connecting with Europe; Egyptian gas finds its way to Europe via LNG. Another difference with Algeria is that Egypt relies more on the Asian market, which receives 78 percent of its LNG. The single biggest market for Egypt is Pakistan (22 percent of LNG exports), followed by the UK and China (10 percent each).

Then there is Libya, but it is a marginal player in natural gas exports compared to its neighbors, as its potential continues to be hampered by the internal turmoil. The only European recipient of Libyan gas is Italy; it accounts for 6 percent of imports in that market. 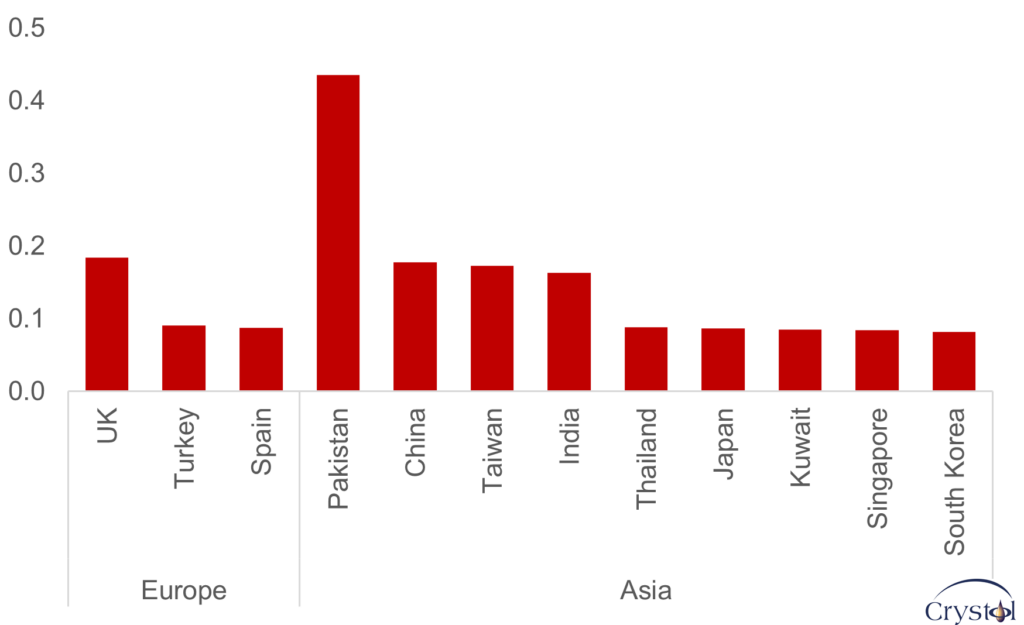 Not an alternative to Russian gas

In the bigger scheme, however, Africa in general and North Africa, in particular, are dwarfed by Russia in most aspects of the natural gas business – whether in terms of reserves, production or pipeline exports. LNG, however, is the exception, as Russia relies extensively on pipeline trade.

North Africa has helped Europe diversify its supplies, which is vital for enhancing the security of supply. However, exports would have to increase significantly to displace more Russian gas, and this is where the outlook becomes less assuring.

No match for Russia 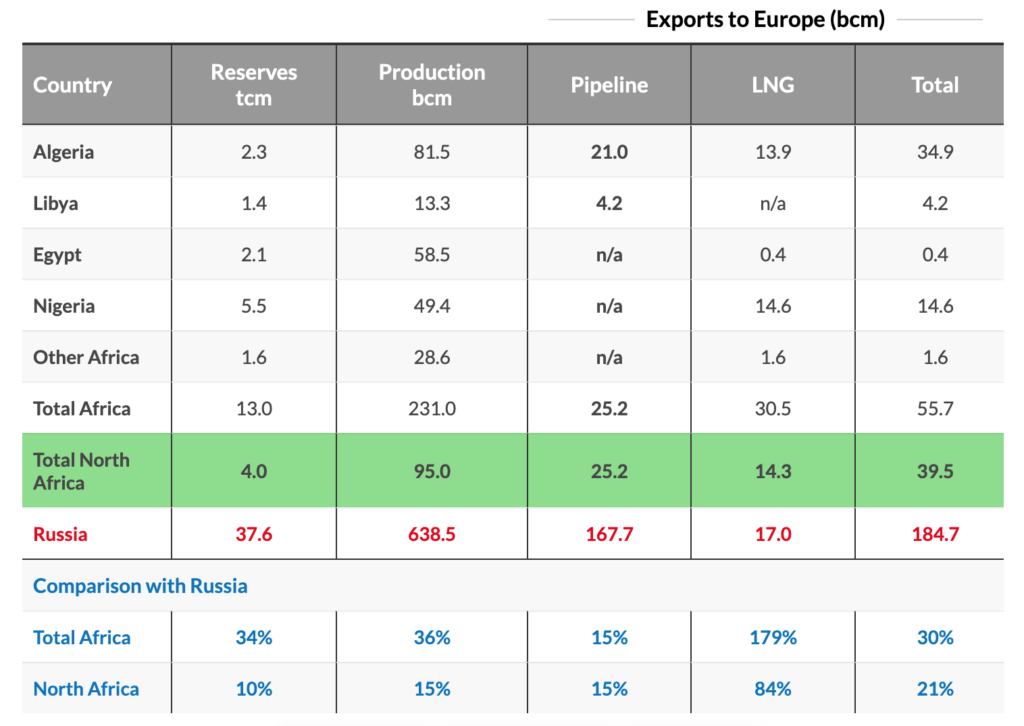 For a country to increase its net exports, production needs to rise faster than its domestic consumption. One of the main challenges limiting North Africa’s export potential is the growth in local demand, which has outpaced production growth.

Between 2010 and 2020, gas consumption in Algeria rose yearly by about 7 percent – a 70 percent overall increase driven chiefly by subsidized domestic gas prices. Over that period, production overall grew (except for 2011 and 2020) but at a modest 0.5 percent yearly. As a result, Algeria’s gas exports peaked in 2003 and have been on a declining trend since. 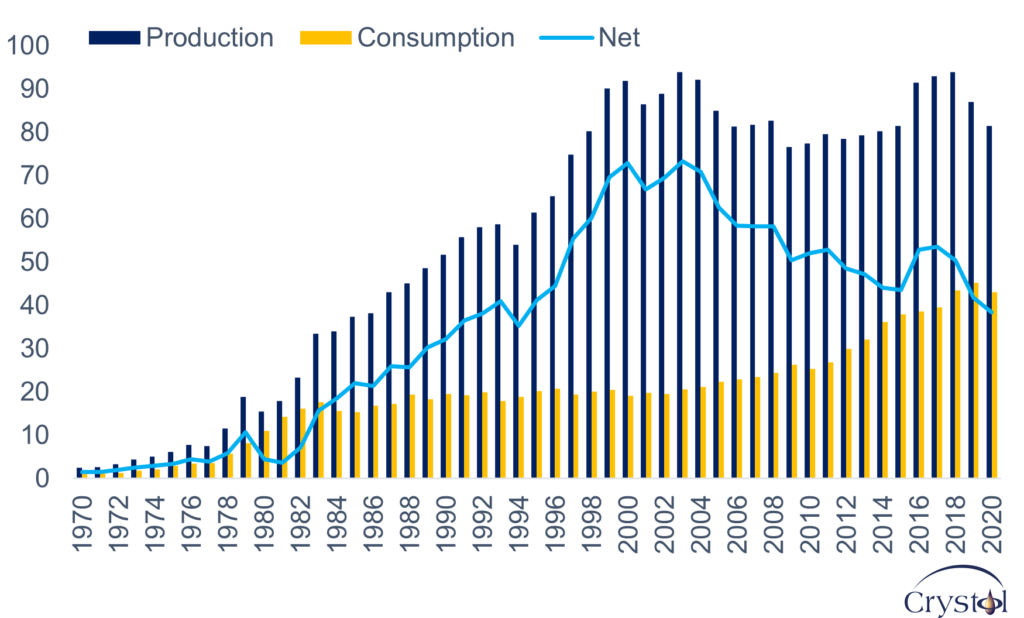 The rapid growth in local consumption has affected the country’s gas balance and resulted in the underutilization of its export potential. Even though Algeria has the largest LNG export capacity in the region, it only exported 15 bcm in 2020, out of 34 bcm of available capacity (46 percent utilization rate). Furthermore, Algeria’s gas pipeline export capacity (at 60 bcm, the largest in Africa and roughly half the export capacity of Norway and one-third of Russia’s pipeline export) is also underutilized (43 percent).

According to Sonatrach, Algeria’s national oil company, Algeria aims to increase its annual gas production to 140 bcm by 2023. That would mean a staggering increase of 76 percent. It is unclear how such an ambitious target can be achieved so quickly. For a long time, Algeria has struggled to attract international capital because of a combination of adverse government policy and legislation, bureaucracy and security. Although the government has enacted some reforms to attract investment, investors continue to suffer from stifling bureaucracy, which causes delays in permitting and approvals, among others.

While smaller and more recently discovered gas fields can support current production over the next few years, the longer-term prospect of Algeria’s export capability depends on discoveries, which means more investment is needed today. Algeria may therefore be able to keep up with its local gas demand, and its export potential may increase back to the level of 2018 (around 50 bcm/year) by the end of 2025, as higher gas prices support such expansion. However, under business as usual, further export expansions should not be expected; on the contrary, a potential decrease may become a reality in the longer term.

Meanwhile, Algeria has constantly featured among the world’s top 10 largest gas flaring nations – a position it has consistently held over the last 10 years. Reducing this wasteful practice, used in oil extraction, can help boost exports.

Although Egypt’s gas exports also peaked in 2009, its export outlook looks rosier than that of Algeria.

Like Algeria, fueled by generous subsidies, local natural gas consumption grew rapidly between 2010 and 2020 (more than 33 percent) while gas production shrank over the same period (at -0.9 percent). However, despite being a smaller producer than Algeria and a bigger consumer, Egypt managed to reverse its net export position. At the peak of its gas production in 2009, it exported around 19 bcm per year. But due to the uptake in domestic gas demand and falling production, it became a net gas importer between 2015 and 2018. 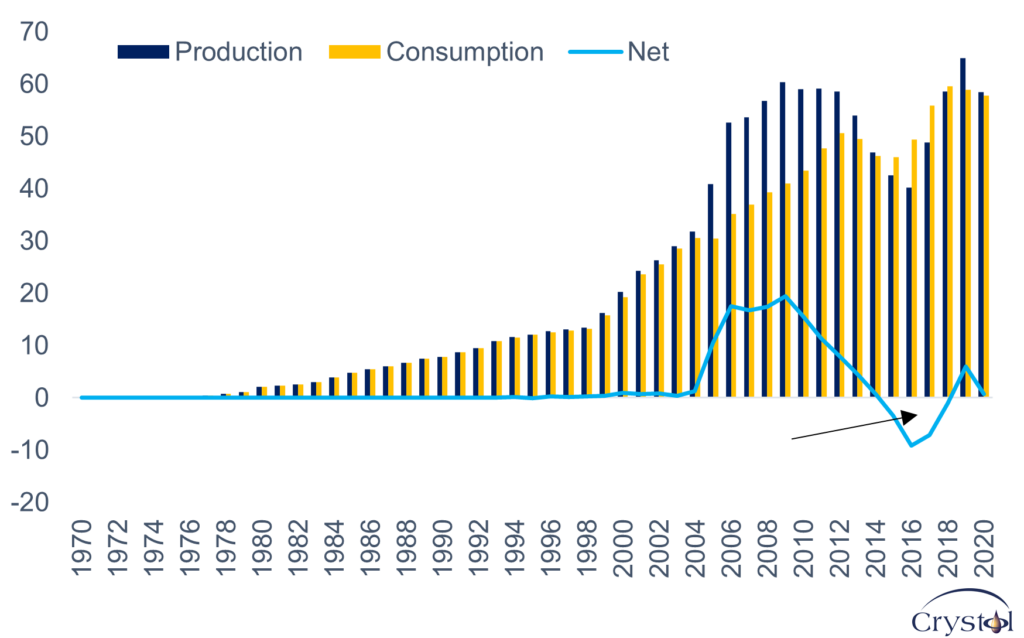 The country, however, imposed several rounds of domestic price increases, including on energy (the pressure from the International Monetary Fund as part of its loan program provided the main incentive). The reforms seem to be effective as domestic gas consumption in Egypt has been declining since 2019.

The government has also reformed its upstream legislative framework to improve the investment climate in the country. Today, Egypt features a more vibrant international corporate landscape than Algeria, where the national oil company dominates the sector.

The discovery of the giant Zohr gas field in 2015 and government support to fast-track its development also changed Egypt’s outlook and repositioned it as a net gas exporter. Currently, Egypt is expected to export around 11.5 bcm by 2025. That would represent a 60 percent growth from its 2009 peak export year – quite an accomplishment for a country that was a major importer only a few years ago.

Furthermore, Egypt holds a central position in the region that will allow it not just to export the projected surplus of gas in the coming couple of years but also to integrate gas from Israel and potentially from Cyprus as it aims to become a regional hub. It has the infrastructure in place to take East Mediterranean gas and reexport it via its established LNG export facilities.

On balance, the outlook for North African gas is mixed, especially regarding its relevance to Europe. With further reforms aimed at spurring investment in the local sector and boosting production and exports while curtailing growth in domestic demand, the region could expand its role as a gas exporter. If that does not materialize, however, the EU will need to look elsewhere for additional supplies to replace sizable Russian gas purchases.