Kazakhstan: An energy opportunity for the EU

Following Russia’s invasion of Ukraine, the European Union has openly expressed its determination to seek alternative energy suppliers to Russia as it pursues independence from all Russian fossil fuel imports by 2030.

“We simply cannot rely on a supplier who explicitly threatens us,” Commission President Ursula von der Leyen said in March 2022. However, swiftly finding alternative suppliers of similar volumes is not easy, particularly with fossil fuels.

Still, this crisis represents an opportunity for other producers keen to strengthen their collaboration with the West, particularly the EU, and gain greater market share in this lucrative market. 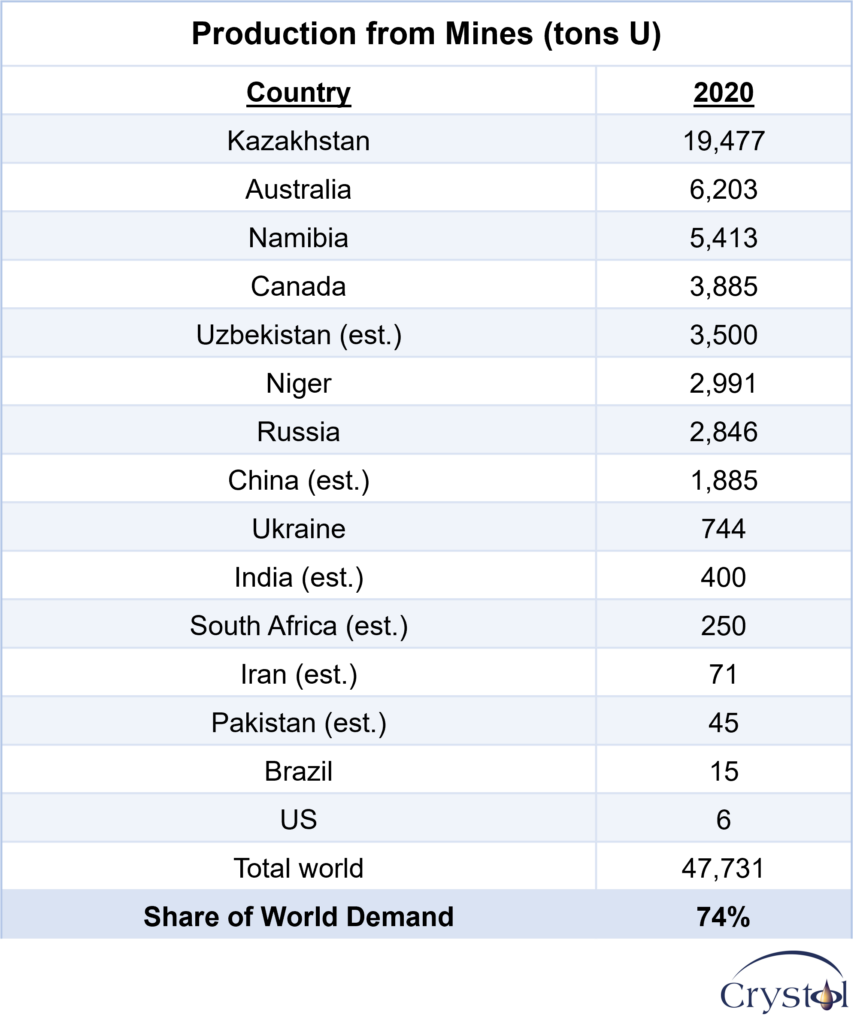 However, the EU’s energy imports from Russia are not limited to coal, oil and natural gas. Currently, Russia is the second-largest exporter of uranium – the feedstock for nuclear energy – to the EU, providing 20.2 percent of the Union’s needs, after Niger (20.3 percent). Such dependence has not received much attention in the EU-Russia trade relationship.

Unlike fossil fuels, the pool of uranium suppliers is much more limited, given the security and safety issues surrounding its use, and production is highly concentrated in a few countries. Yet, because of baseload energy-generation shortages around the world, the future of uranium suppliers looks promising.

According to the World Nuclear Association, only 15 countries meet three-quarters of world uranium demand, with Kazakhstan being the largest exporter since 2009. Today, it accounts for more than 41 percent of world uranium supplies, followed by Australia (13 percent) and Canada (8 percent). The EU is the world’s largest nuclear energy consumer, accounting for 25 percent of global consumption. However, it is uranium-poor, and such a combination makes it an attractive market for any uranium producer.

At the beginning of the last decade, Russia was the largest exporter of uranium to the EU. But it gradually lost its dominance over the market. Today, it ranks second after Niger and ahead of Kazakhstan, though the gap between its exports and Kazakhstan’s has been marginal.

One therefore wonders whether a country like Kazakhstan, which sits right at Russia’s doorstep, can further crowd out Russian uranium in its core market and support the EU’s energy ambition. Technically speaking, Kazakhstan has the potential to do so. While proximity to Russia may not encourage a greater EU reliance on the central Asian country, the gamble may be worth it from both an energy and geopolitical standpoint.

Top five largest suppliers of uranium to the EU 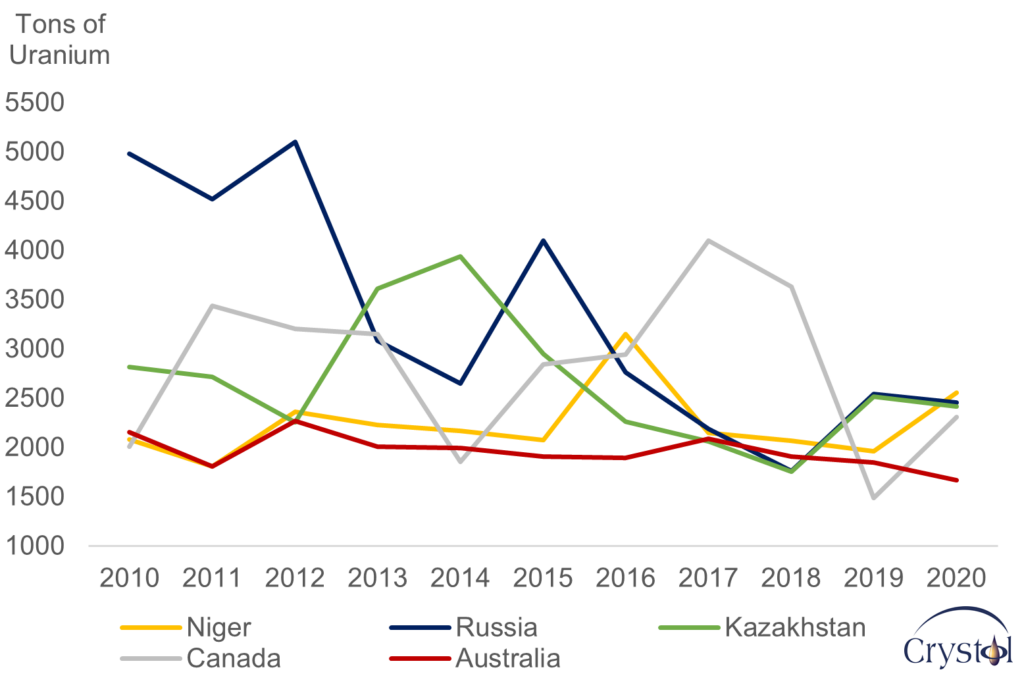 The EU has supported Kazakhstan’s development since the country’s independence in 1991 – a relationship that has strengthened in recent years.

Kazakhstan is the first Central Asian country to conclude the Enhanced Partnership and Cooperation Agreement with the EU (in force since March 1, 2020). The agreement provides a comprehensive framework within which bilateral relations are conducted and covers 29 areas of cooperation, including trade and economic relations and energy and climate change.

Kazakhstan is also part of the New EU Strategy on Central Asia adopted in 2019. It provides the overall framework for regional engagement. The strategy supports Kazakhstan’s transition to a green economy and the diversification of its economy, among others.

The EU is Kazakhstan’s key trading partner, accounting for 40 percent of the country’s external trade. Although China and Russia are Kazakhstan’s largest trade partners – not surprisingly given geographical proximity – half of its 10 largest partners are EU countries.

In terms of nuclear safety, Kazakhstan has promoted a nuclear-free zone in Central Asia. Furthermore, in 2017, Kazakhstan’s then-President Nursultan Nazarbayev established a low-enriched uranium (LEU) bank under the auspices of the International Atomic Energy Agency, of which the EU is a strategic partner. The bank is part of global efforts to create an assured supply of nuclear fuel to member states if the supply of LEU – the basic material to fabricate nuclear fuel – is disrupted. The bank is located at the Ulba Metallurgical Plant in Oskemen, Kazakhstan, and is under the responsibility of the appropriate local authorities for safety, security and safeguards in Kazakhstan.

It is worth noting that Kazakhstan is the only former Soviet Central Asian nation to ratify the Convention on Nuclear Safety (CNS). As the Soviet Union collapsed, Kazakhstan had 1,410 Soviet strategic nuclear warheads on its territory, but President Nazarbayev undertook a bold policy of stopping Soviet nuclear tests in Semipalatinsk.

Kazakhstan’s former leader pursued complete nuclear disarmament in exchange for international recognition and investment. The country is now the top destination for foreign investments in the region.

According to the World Bank, since gaining independence, “Kazakhstan has experienced a remarkable economic performance. Rapid growth, fueled by structural reforms, abundant hydrocarbon resources, strong domestic demand, and foreign direct investment, has helped reduce poverty and transform the country into an upper-middle-income economy.”

Of course, more work needs to be done, primarily to improve the economy’s resilience to external shocks, reduce income inequality, control corruption and strengthen the country’s institutions. The social unrest in early 2022 raised international concerns. Some reports stated that during the weeklong violent unrest, security forces shot more than 200 people dead and arrested over 9,900. However, the riots have pushed Kazakhstan to announce and accelerate reforms. Following the unrest, President Kassym-Jomart Tokayev acknowledged that the January 2022 events damaged Kazakhstan’s international reputation and called for a wide range of reforms.

As the International Monetary Fund describes it, the unrest “has provided new impetus for structural reforms.” The key priorities announced by the authorities are to raise economic growth and inclusion by promoting economic diversification, private sector development, and improved governance.

On the latter, it is interesting to note that Kazakhstan has been going in the right direction. For instance, although the government needs to continue to address corruption vulnerabilities, Kazakhstan’s score on the Corruption Perception Index, which ranks countries by their perceived levels of public sector corruption, has been on an upward trend for at least the last 10 years. For instance, in 2012, Kazakhstan ranked 133 out of 174 countries; in 2021, it improved its position to 102 out of 180 countries. Equally interesting is the performance of Kazakhstan on various governance indicators compared to Russia, where it outperforms its neighbor.

The lower the score, the better the rank/performance of a country 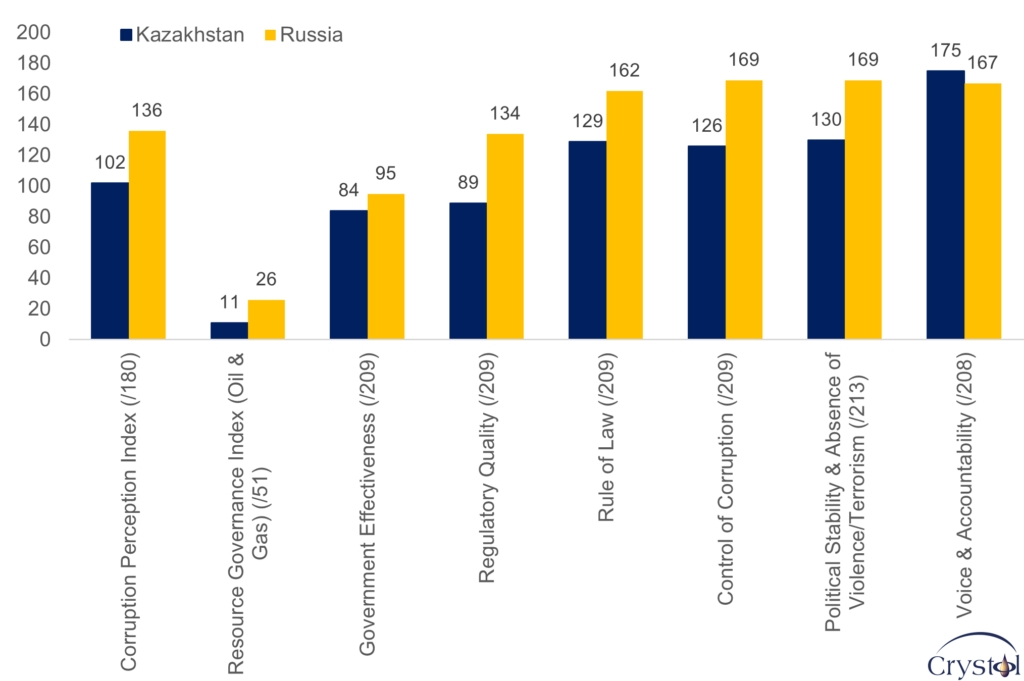 Kazakhstan’s response to the social unrest earlier in 2022, whereby President Tokayev called on the Russian-led Collective Security Treaty Organization for help, raised concerns. However, the resource-rich Central Asian country has been trying to maintain a delicate balancing act between a powerful neighbor with which it shares an over 7,000 kilometer-long border and which hinted at claims to its northern regions, and the international community. The policy has worked to a certain extent.

President Nazarbayev developed a multi-vector policy, having good relations with Beijing, Moscow, Brussels and Washington. President Tokayev has continued this policy and has not supported Russian President Vladimir Putin’s invasion of Ukraine.

Today, there are geopolitical and economic gains for the EU to maintain its long-standing support for Kazakhstan and help it develop its role as nuclear power fuel supplier. Uranium exports can play an essential role in this respect as Kazakhstan pursues its recently announced reforms. 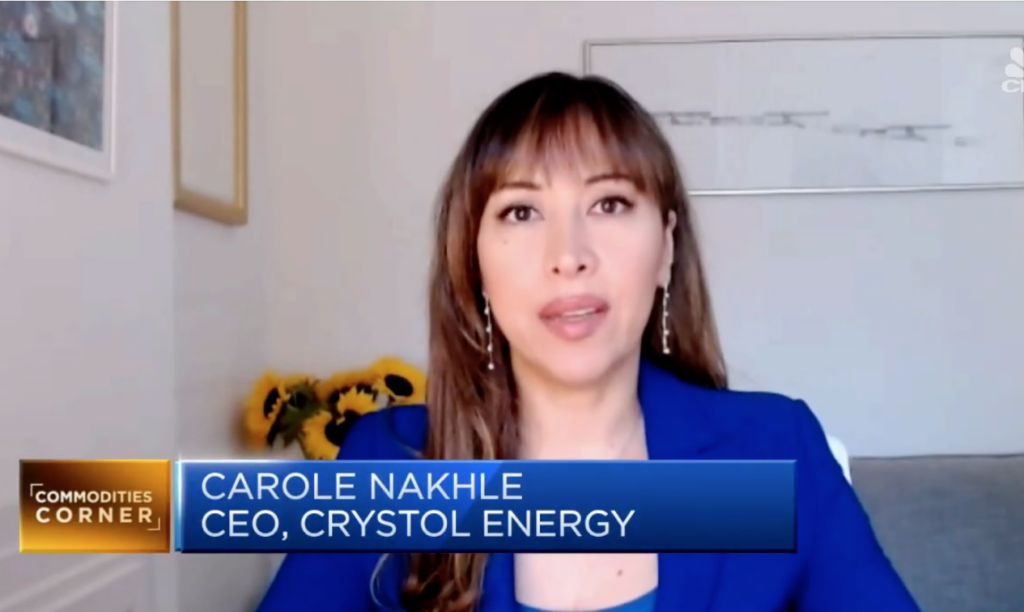