Immediately after Russia’s invasion of Ukraine, world oil prices jumped above US$100 per barrel, hitting US$130 for Brent crude on March 8. The prevailing fear was that substantial Russian supplies would be lost to the world market either through western sanctions or a voluntary decision by Moscow in retaliation to western support for Ukraine. This was especially worrying when the world was already struggling to secure enough additional oil to meet rapidly growing demand as the COVID restrictions began to ease.

The International Energy Agency (IEA), for example, predicted that “from April, three million barrels per day of Russian oil output could be shut in” – that’s about a third of the total. It feared that this could produce “the biggest supply crisis in decades”. 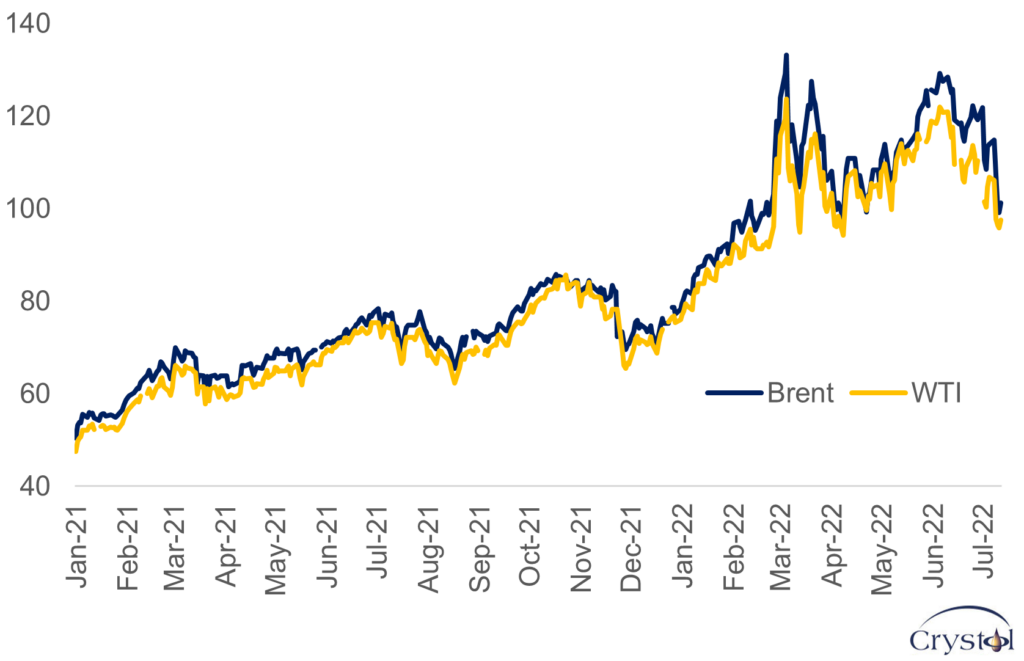 Yet such forecasts turned out to be much too pessimistic. After more than four months of war, Russian oil and gas production is at close to the same level as when the war started. So why is this, and what can we expect in future?

Russia is “incredibly unimportant in the global economy except for oil and gas”, as the Harvard economist and former Obama adviser Jason Furman once said. It is only the 11th largest economy overall, despite being the third largest oil producer after the US and Saudi Arabia and second largest oil exporter after Saudi. It also sits on the largest proven gas reserves in the world, is the second largest producer after the US and the largest exporter.

In particular, Russia is the largest energy supplier to the EU, accounting for 27% of oil imports and 41% of gas. Second-placed Norway accounts for 7% and 16% respectively.

These simple facts explain why Russia matters for oil and gas markets, and why it was not easy for the EU to ban its imports as soon as the war started. Several other countries did impose restrictions: Canada became the first country to ban Russian crude oil imports, and then the US followed suit, banning all Russian oil, liquefied natural gas and coal from April. The UK announced that it would phase out Russian oil imports by the end of the year. Many private buyers, primarily based in the west, also stopped buying for fear of reputational damage and getting caught in the sanctions minefield.

Yet despite all these restrictions, oil prices fell from their March highs (even though the war seems to have placed a floor of US$100 per barrel). This is partly due to the gloomier global economic outlook caused by raging inflation and rising interest rates, which is likely to reduce demand for oil. At the same time, however, the countries that rushed to ban Russian oil are not among its biggest consumers, which are China, Germany and the Netherlands.

Asian buyers also welcomed the “opportunity” to buy Russian crude oil at discounted prices: the main product, known as Urals, used to sell at around US$1 per barrel below Brent, but the gap is currently over US$30.

The IEA duly scaled back its forecasts. In its April report it expected Russian oil supply that month “to fall by 1.5 mb/d [million barrels per day]”, adding that around 3 mb/d would be off the world market from May. But in its May report, the agency estimated that Russian oil production declined by nearly 1 mb/d in April and that “losses could expand to around 3 mb/d during the second half of the year”. According to Russian sources, the country’s oil output rose 5% to 10.7 mb/d in June compared to around 11 million in January/February.

After months of negotiations, the EU announced on June 3 an import ban on all Russian seaborne crude oil and petroleum products – effective in six months for crude oil and eight months for petroleum. Both Germany and Poland have also committed to halting pipeline imports, so 90% of Russian oil exports to the EU or 2.5 mb/d are going to be lost.

Again, however, a significant proportion will be captured by other buyers. In May, for instance, China’s oil imports from Russia reached a record of 2 mb/d, and Russia overtook Saudi Arabia as China’s largest supplier. India has also boosted its purchases of Russian oil since the war started. China and India are the world’s two largest net oil importers, and China is the second largest oil consumer after the US.

In total, the US Energy Information Administration (EIA) assumes that about 80% of the crude oil subject to the EU import ban will find alternative buyers, mainly in Asia. As long as sanctions are not imposed by all the major oil importers, Russian oil will continue to find buyers.

This explains the considerable variation in estimates of how much Russian oil will be lost to the world market, particularly in the short-term – from as little as 0.25 mb/d by Opec to 3 mb/d by Goldman Sachs.

In the longer term, however, assuming the western boycott is maintained and even tightened, the loss will become more notable. Even before the war, the Russian government’s own forecasts expected its oil and gas production to be undermined both by depleting reserves and the effects of the technological and economic sanctions imposed by the west after the 2014 Crimea invasion. Even its most optimistic scenario predicted a short-term modest increase in oil production and then plateauing from 2024 to 2035. In the more conservative scenario, oil production was expected to decline.

Since the war began, many western oil companies, which typically bring capital and technology, have exited Russia. In a country with complex reservoirs, ageing fields and a hostile climate, the lack of investment and access to technology will accelerate the long-term decline.

The global market will ultimately accommodate such an outcome, as other supplies become available and demand responds to prices, but Russia will have to live with a shrinking market share and diminished influence on global oil markets. This will make it much harder for Moscow to finance future wars. It also means that the Russians are going to have to diversify their economy at a time when a substantial slice of the world will no longer do business with them.

The article was first published by The Conversation

In this interview with Manus Cranny on Bloomberg Daybreak: Middle East, Dr Carole Nakhle, CEO of Crystol Energy, discusses the impact of the decision of