Europe and Russia without Nord Stream

On September 26, 2022, major leaks were found in the Nord Stream 1 and 2 gas pipelines, located in the Danish and Swedish exclusive economic zones. On November 18, the Swedish Security Service confirmed initial suspicions that the damage was caused deliberately, with remains of explosives found.

The two identical pipelines had brought Russian gas through the Baltic Sea to Germany. While energy infrastructure is no stranger to attacks, the blasts were clearly a sophisticated act of sabotage. No one has claimed responsibility to date, and the perpetrator has not been identified.

Speculation has focused on various actors. Russian President Vladimir Putin described the incident as “an unprecedented act of international terrorism,” and Moscow blamed the British navy, without evidence. Faith Birol, head of the International Energy Agency (IEA), said the culprit was “very obvious,” implicitly pointing to the Kremlin. Others suspected the United States, fueled partly by a claim from American President Joe Biden in February that “if Russia invades … then there will no longer be a Nord Stream 2. We will bring an end to it.”

Sweden, Germany and Denmark are now undergoing separate investigations. Swedish officials have called their inquiry “extensive and complex,” and said it would reveal whether any party could be prosecuted for the attack.

Regardless of the culprit, the effects on energy markets and various stakeholders will be significant in the long term. It is Russia who will likely face the most detrimental consequences.

The Nord Stream pipelines have been controversial from their inception. Nord Stream 1, which was completed in 2012, caused its fair share of political friction between European Union member states, as well as between the EU, Russia and Ukraine. Still, the project went ahead, with the economics simply too tempting for customers during an era of tight gas markets. Though some in Europe warned of an increasing dependence on Russian gas, others emphasized the greater reliability of supply it offered, since Europe would be less exposed to disputes between Russia and Ukraine.

Nord Stream 1 has a capacity of 55 billion cubic meters (bcm), or nearly 14 percent of the EU’s 2021 gas consumption. Nord Stream 2 was even more controversial. If the second pipeline ever became fully operational, around 65 percent of total gas deliveries from Russia to Europe would have traveled through a single transport corridor. More importantly, it would have allowed Russia to bypass Ukraine and some eastern EU member states almost entirely. Russia had been pursuing this very goal since the collapse of the Soviet Union. In 1991, 95 percent of Russian gas exports to Europe were shipped via Ukraine; in 2021, the share was around 42 percent. 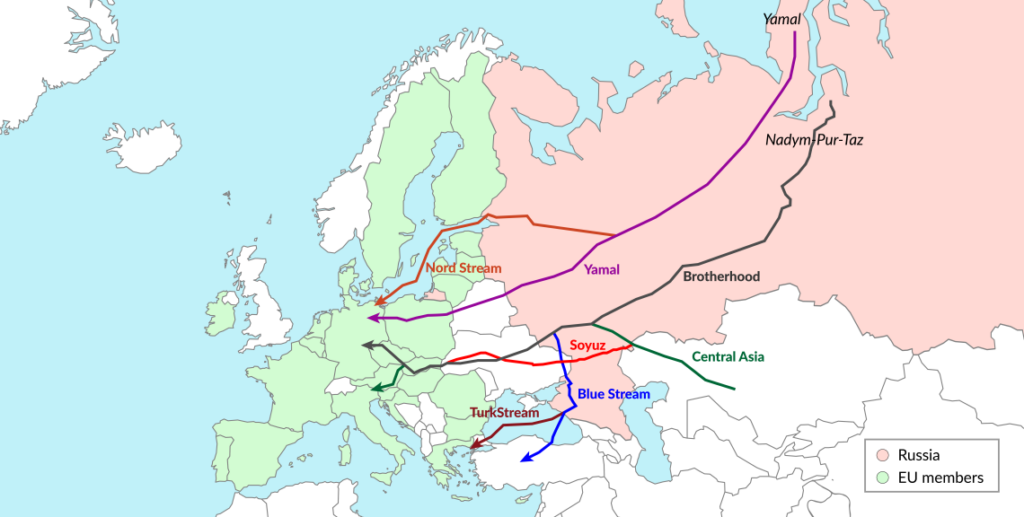 Russia built a web of pipelines to diversify its gas export routes away from Ukraine, starting with the Yamal pipeline via Belarus, to Poland and Germany, in the 1990s; the Blue Stream pipeline under the Black Sea to Turkey; and Nord Stream 1, flowing under the Baltic Sea to Germany. With Nord Stream 2, Ukraine’s role in transporting Russian gas would have been reduced to 25 bcm, or just 17 percent of Russia’s 2021 gas exports to Europe. If the proposed Turk Stream 3 and 4 were realized, supplying gas to Southern Europe via Turkey, that last 25 bcm could also be switched off – evaporating Ukraine’s transit business.

For Russia, this scenario had a strong commercial rationale, in addition to the favorable political ramifications.

Over the last few years, Russia reduced deliveries to Europe through Ukraine while other routes were used at almost full capacity. The Nord Stream 1 and Belarus transport routes are owned and controlled by the state-owned Gazprom, Russia’s largest gas producer. The transport costs along those two routes can thus be internal, unlike with the Ukrainian supply line.

Furthermore, Nord Stream can deliver competitive cost advantages to Gazprom. The gas giant is moving its key production base from the Nadym-Pur-Taz region – where its fields have been declining – to the Yamal Peninsula, which can access Nord Stream more directly. The route’s total distance from the field to the delivery point in Europe is half the length of the Ukrainian path, which is Gazprom’s most expensive for exports. Having alternatives gives Russia more bargaining power in dealing with Ukraine, including in negotiating transit fees, which are part of Gazprom’s marginal gas costs in Europe. That alone would make Russian gas more competitive, especially as it faces greater competition from U.S. liquefied natural gas (LNG).

This was Russia’s ambition. Following the war in Ukraine and the attacks on Nord Stream, Moscow’s plans have been redrawn. 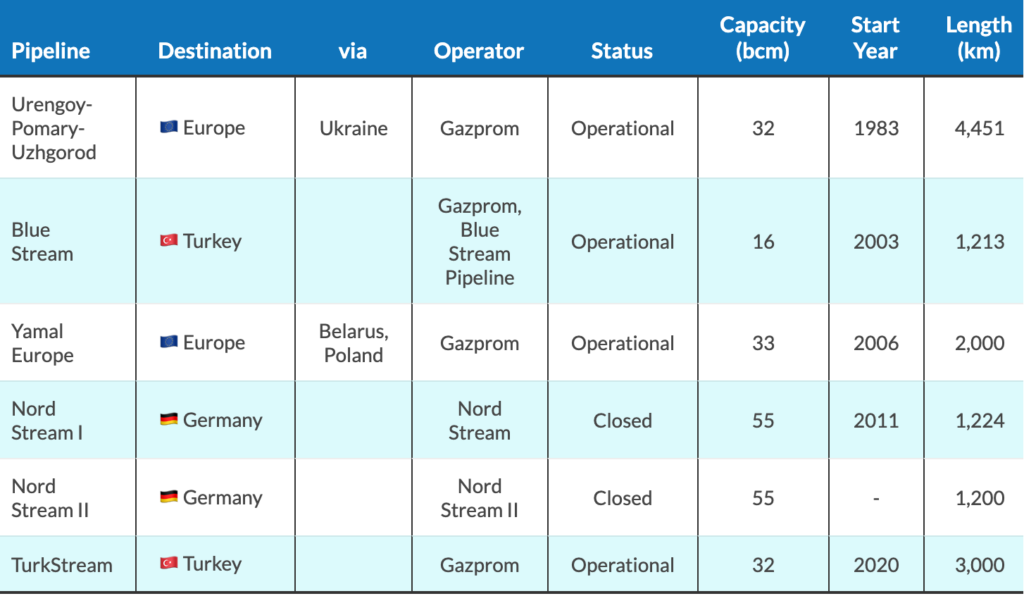 Despite the importance of the pipelines, the market reaction to their sabotage has been subdued. Neither pipeline was operating at the time of the explosions; Germany canceled the certification process of Nord Stream 2 in February, and Russia has gradually halted gas supplies going through Nord Stream 1. In this respect, the blasts did not cause a supply shock.

That effect was compounded by a warmer-than-expected autumn, which kept gas demand below average, and a strong push across the EU to reduce consumption. This also coincided with a rapid buildup of gas storage, which exceeded 95 percent in the EU. Meanwhile, since the beginning of the war in Ukraine, the EU has been actively seeking alternative gas supplies, with LNG flowing from exporters like the U.S. playing the biggest role.

As a result, there was a small surge in European gas prices right after the attack. But that bump was short-lived, and prices returned to their prior downward trajectory. 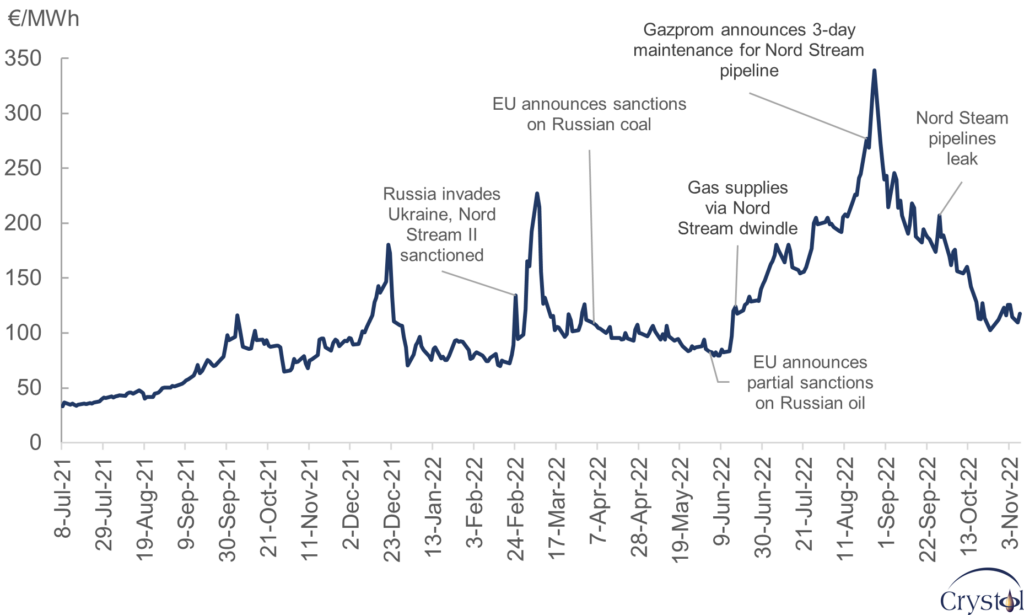 However, the long-term consequences of the sabotage will be significant.

The extent of the damage to the Nord Stream pipelines is not clear. Speaking at Moscow’s Russian Energy Week conference in October, Gazprom chief Alexei Miller said that fixing the pipelines would take at least a year. The following month, Kremlin spokesperson Dmitry Peskov stated that Russia would assess the viability of repairs after the final estimates of the damage became available, casting greater uncertainty around the fate of Nord Stream.

Meanwhile, Mr. Putin has offered gas to Europe through an intact stretch of Nord Stream 2 and suggested an alternative through Turkey, which would become a gas hub. This was likely music to Turkey’s ears, as it has long wanted to achieve such an ambition but has been snubbed by Europe. “The ball is in the EU’s court. If they want to, then the taps can be turned on, and that’s it,” the Russian president said in October. Germany, however, has publicly ruled out the use of Nord Stream 2.

The war in Ukraine and Moscow’s use of gas as a political weapon – not entirely new, but now going one step too far – have provoked Europe into accelerating its exit from Russian gas. In its REPowerEU energy plan, published in May 2022, the EU had already announced a goal of ending its reliance on Russian fossil fuels before 2030. Germany, Russia’s biggest gas customer (and longtime “friend”) has decided to replace all Russian energy imports – most notably natural gas – by as soon as mid-2024.

On November 15, Berlin inaugurated its first floating LNG terminal, which was completed at an impressive speed of 194 days and made possible through permitting exceptions and forgoing environmental impact assessments. Although the terminal has a relatively modest annual capacity of 7.5 bcm, it is one of the five floating units Germany plans to build, in addition to two land-based permanent terminals.

While this is a major achievement, the main challenge left for the EU is to secure the additional supplies necessary to bring its dependence on Russian gas to nil. Although Europe has been able to attract some non-Russian gas, this has so far come at a high price – as shown by the upward trend in European gas prices, especially when the continent was busy filling up storage during the summer.

There are several uncertainties beyond this coming winter. First, existing suppliers, such as North African countries, have probably maxed out their export capacity, and it will take a while for new capacity to come onstream (assuming investment is undertaken). LNG supplies in particular are often described as “wavy” given the scale of investment such projects require. A period of market tightness can be expected until the next new wave of new LNG projects hits the market.

Second, the relevant factors are not just demand for gas in Europe, but also demand in other major markets – primarily Asia. When gas prices in Europe started to rise notably in 2021, long before the war in Ukraine, the primary driver was strong Asian demand, which diverted LNG cargos from Europe and tightened supply on the continent.

Europe can and will increase the use of alternative sources of energy, particularly renewable energy, but the substitution will be gradual. In its REPowerEU plan, Brussels pledged to increase the share of renewables in its energy mix to 45 percent by 2030 – up only 5 percent from previous plans.

Despite these challenges, Europe is still in a better place than Russia. Europe was the most important market for Russia, which invested heavily in extensive pipeline infrastructure across the region. Even in its riskiest energy scenarios published in recent years – where Russia predicted a shrinking European market, primarily because of climate policies – it did not foresee a total loss of that market.

Instead, Russia has been turning east. But while Asia is hungry for gas, Russia will need to expand its LNG export capacity, since the pipeline infrastructure connecting to Asia is very limited. In 2021, LNG accounted for nearly 17 percent of total Russian gas exports. Meanwhile, there is only one major pipeline (the Power of Siberia) that connects Russia’s Far Eastern gas fields to China. That route began operating in 2019, with an annual capacity of 38 bcm.

In February 2022, Russia announced a 30-year contract to supply gas to China via a new pipeline. The Power of Siberia 2, only expected to be operational in 2030, has a capacity of 50 bcm and would supply China from the West Siberian gas fields, via Mongolia. Other than limited infrastructure, Russia also faces the problem of reputational damage – with Asia unlikely to see it as a reliable gas provider.

PrevPreviousEnd of Year Message from our Chairman, Lord Howell
NextOil markets: An early peek into 2023Next