In its latest climate change assessment, the Intergovernmental Panel on Climate Change (IPCC) – the United Nations body for assessing the science related to climate change – concluded that “human influence has warmed the climate at a rate that is unprecedented in at least the last 2000 years.”

That influence is primarily related to the production and consumption of coal, oil and natural gas. The combustion of these fossil fuels has been the main contributor to rising concentration levels of CO2, the main greenhouse gas (GHG). The IPCC warned that “unless there are immediate, rapid and large-scale reductions in GHG emissions, limiting warming to close to 1.5 degrees Celsius, or even 2 degrees Celsius will be beyond reach.” Should this fail to happen, the panel warns of dire environmental, social and economic consequences. Lowering GHG emissions would entail putting an end to the fossil fuel “madness,” to quote climate change activist Greta Thunberg. She, like others, has been repeatedly calling for “the world’s leaders to invest their money in existing sustainable technologies, research and in restoring nature.” 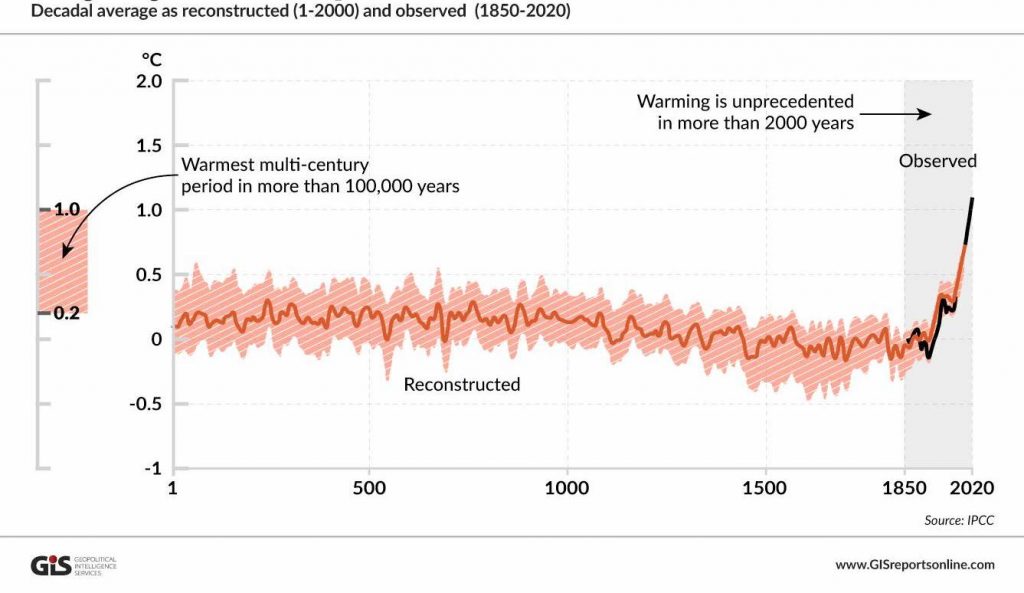 In this increasingly green world, if today’s main hydrocarbons producers want to stay in the energy business, they will have to diversify their supplies. The United Arab Emirates (UAE), the seventh-largest oil producer in the world (after the United States, Saudi Arabia, Russia, Canada, Iraq and China) and third-largest within OPEC (after Saudi Arabia and Iraq), is leading the trend. The first country in the Middle East to ratify the Paris Climate Accords in 2016, the Emirates has turned to its massive supply of solar energy to achieve the targets laid out in its Energy Strategy 2050, namely a 50-percent clean energy primary energy mix. Leading the effort is Masdar.

Established in 2006 and wholly owned by the sovereign investor Mubadala Investment Company, Masdar – “source” in Arabic – has invested in more than 11 solar projects domestically. For example, the Shams 1 solar power station in Western Abu Dhabi was the largest renewable energy project in operation in the Middle East when launched in 2013. The plant displaces about 175,000 tons of carbon dioxide per year, which is equivalent to planting 1.5 million trees or removing 15,000 cars from Abu Dhabi’s roads. Another interesting project in the company’s domestic portfolio is the Mohammed Bin Rashid Al Maktoum Solar Park, one of the world’s largest solar photovoltaic plants. But it is not just the park’s scale that captured the world’s attention: the Masdar-led consortium won the project in July 2016 by offering the lowest recorded bid for a solar plant at the time, valued at 2.99 U.S. cents per kilowatt-hour (kW/h).

Investing in alternative energy is especially appealing to major oil and gas producers; it helps them tackle the enduring need to diversify their economies long dominated by hydrocarbon revenues. Masdar’s mandate, for instance, is “to help maintain the leadership of the UAE in the global energy sector, while supporting the diversification of both its economy and energy sources for the benefit of future generations.”

There is also an important dimension that is less often explicitly mentioned when discussing the world’s energy future. Contrary to the prevailing belief, the global energy transition can be facilitated and indeed accelerated by oil and gas, primarily through the wise reinvestment of hydrocarbon revenues into alternative energy. Here, too, the UAE is an interesting model, as some of its oil revenues channeled into its sovereign investors like Mubadala Investment Company are in turn used to fund clean projects.

Masdar, for instance, has invested in green energy projects with a combined value of $19.9 billion, accounting for more than 8 percent of Mubadala’s assets. That share is expected to grow further with the increasing popularity of alternative energy. The company is active in more than 30 countries, including the United Kingdom, the U.S., Australia, Spain, Serbia, India, Indonesia, and Uzbekistan.

Masdar holds 20 percent of the UK’s London Array, one of the world’s leading offshore wind farms, and 25 percent of Hywind in Scotland – the world’s ﬁrst ﬂoating offshore wind farm. Most recently, Masdar secured a deal to develop Armenia’s biggest utility-scale solar project, as well as a 65 megawatts (MW) solar project in Greece and a contract for two 220 MW solar plants in Uzbekistan. The company also invests closer to home, for example funding the Dhofar Wind Power Project in the Sultanate of Oman.

Masdar City, 17 kilometers outside Abu Dhabi, is one of the world’s most sustainable urban communities. As part of the Masdar Initiative, the Abu Dhabi government announced in 2006 its intent to spend $22 billion to build a carbon-neutral, zero-waste city with state-of-the-art sustainable urban planning. Built from scratch in the desert, the city’s construction started in 2008 and is due for completion in 2025-2030. Once finished, it may well become a model for eco-cities of the future.

Currently, Masdar City is home to the only planned and approved research and development cluster in Abu Dhabi. It is also a testing facility for pilot projects in sustainability. The Masdar City Free Zone business is rapidly expanding. Despite the challenges of Covid-19, the number of businesses operating there increased by 26 percent in 2020. It is also home to the International Renewable Energy Agency (IRENA) – the intergovernmental organization comprises more than 180 member states and supports countries in their transition toward green energy.

There is much to be said about the clean energy projects the UAE is pursuing. But perhaps the most refreshing observation to be made is that, by wisely using their hydrocarbon revenues to diversify their own economy and energy mix, major oil producers can also help the world diversify away from fossil fuels – a win-win outcome.