Pinocchio and the Weatherman

As we all know, Texas has just suffered the worst weather-related power, and then water, outages on record. The blame game set in instantaneously. Governor Abbott tried to apprehend renewable energy while the outages were still unfolding, for good measure throwing in a dark warning about the “deadly” New Green Deal in store under the Biden administration. The Washington Post (rightly) allocated four Pinocchios to the Governor, a rating in the past mostly reserved for Trump tweets. The New York Times (wrongly) tried to bring the blame back to the doorsteps of natural gas, coal and nuclear.

Why, in this polarized country, conservatives still always side with fossil and liberals with “clean” energy (minus nuclear?) need not concern us here. But luckily, this first layer of the blame game – green vs. brown – is largely behind us. Too obvious is the observation that all primary fuels have failed to deliver. 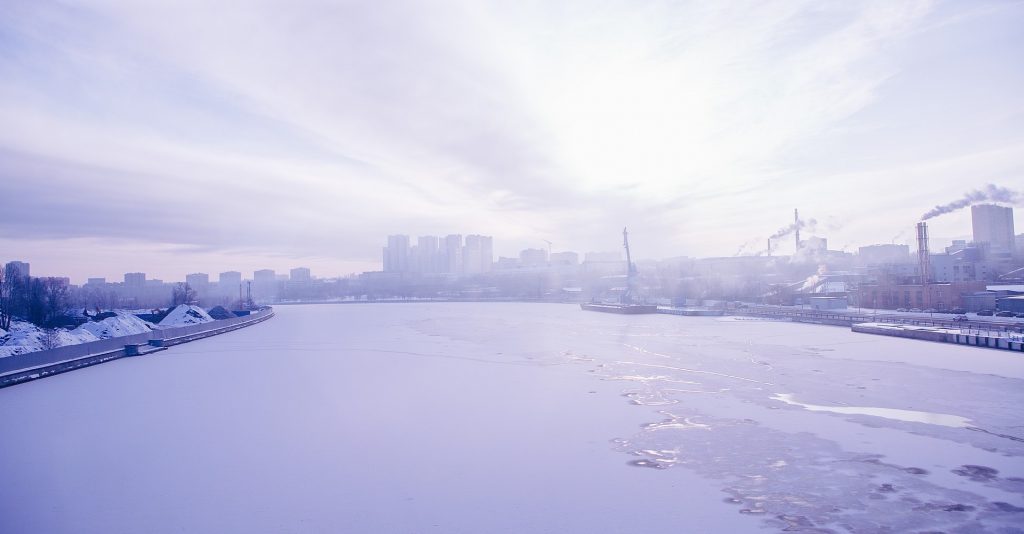 And so the finger-pointing moved on to a second, more interesting layer: the regulatory framework and the design of the electricity system in the nation’s largest energy producing state.

Natural gas, coal and nuclear perform well in many cold places, and so do windmills. Who then was to blame for equipment not properly winterized in Texas: utilities and their management? A system with flawed design because it failed to deliver the investment and maintenance necessary to keep critical infrastructure in good shape?

Or is this a case where one doesn’t need the weatherman to recognize a unique weather event, so devastating and out of proportion that it has to be accepted as force majeure?

The jury is out. For all we know at this point, the ice snap was indeed a centennial event and outside the envelope of contingencies which stakeholders would normally fortify their infrastructure against – no matter their regulatory circumstances.

Even a most horrible weather shock doesn’t make it pointless to study the features and the reaction of the system that has been hit – especially not at a time when infrastructure needs our attention, because the share of electricity in energy is rising, while generation is inexorably tilting toward more renewables.

From extreme events we learn the most. A few lessons are indeed emerging from this unfortunate encounter between nature and human preparedness. They are just not quite what has been discussed so far.

To see them, it helps to clear the dust which has been thrown up when the blame game shifted to the subject of regulation – the perfect subject for political pundits to ease back into preconceived trenches.

For one, much criticism has been heaped on ERCOT (the Electric Reliability Council of Texas), including by the Governor with the Pinocchio prize. ERCOT, however, is the operator of the Texas grid and not a regulator. By some accounts, it has managed rather well the miserable hand it was dealt, and may even have prevented a more serious meltdown (which could have taken months to repair). ERCOT is regulated by a group of three parliamentarians (the Public Utility Commission) and hence in a straight line by the same legislature which has started hearings into the role of the regulator. Let this pass.

Second, the power sector in Texas may have idiosyncratic features but deregulation cannot always be blamed. When it comes to power demand and supply, the Lone Star State is an island, its grid not meaningfully connected to the rest of the US. But this is not because some crazed experiment in market reforms had to be conducted in splendid isolation. It reflects a 140 year old decision made to avoid federal control – a political choice reconfirmed many times since.

Finally, Texas has no market for capacity. It is the only state in the US without explicit incentives or mandates for utilities to maintain a predetermined level of spare capacity. Only electricity is traded. But this doesn’t mean reformers have forgotten that complex systems always need redundancy. It means that Texas has found a different, an endogenous mechanism to provide for spare capacity. 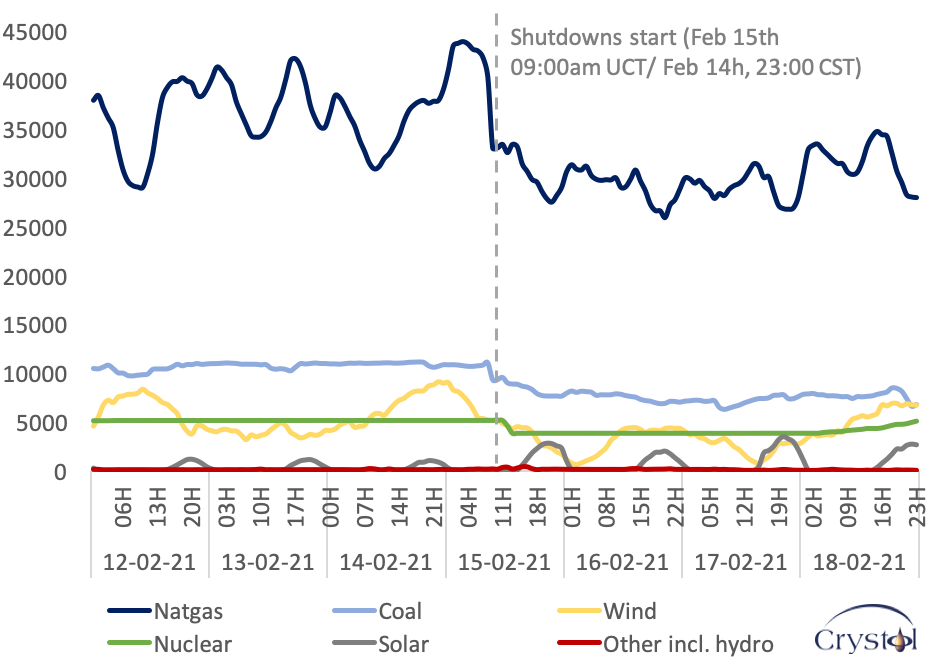 Note: During the three days before the storm (Feb 12-14), with temperatures already starting to plummet, gas accounted for 62%, coal for 18%, nuclear for 9%, and wind for 10% of ERCOT power generation (hydro and solar were negligible on average over this period). Wind fell by more in percentage terms, as discussed in the text; gas by more in absolute terms – no surprise, given its larger share.
Data Source: Electric Reliability Council of Texas (ERCOT)

The option value of spare capacity

The mechanics are simple. If power supplies tighten, wholesale prices will rise (they are capped only at $9,000 per Megawatt hour). Demand may slow and, more important for our narrative, generators will bring more power online. The risk of missing out on these profit opportunities will incentivize electricity producers to maintain a cushion of spare capacity at the ready – commensurate with the long-term system requirements expected by market participants. Imbalances and price movements (arguably even blackouts) will continuously give power suppliers good reason and reliable signals to reassess the probable range of extreme cases.

Texas is the only state which has endogenized the provision of spare capacity in this way. As a result, it has lower spare capacity and lower electricity prices than other states. Approaching the summer of 2019 for instance, Texas had spare capacity of 8.5% of anticipated peak demand; New York State had 25%. Holding spare capacity is costly and this is one reason why average electricity tariffs in Texas are undisputedly lower than elsewhere. But which system is better at accommodating the rising role of electricity in our future?

Starting from the recent havoc, one needs to make a clear distinction. First, higher levels of spare capacity would not have helped. By all accounts, back-up assets would have been frozen over just as much as the existing pipelines, well heads, wind rotors, coal heaps and nuclear water supplies. Texas’ isolation from the US grid has not helped, of course, but this is a separate matter (and supplies outside the state of Texas were compromised as well). Second, lowering the risk further would have been possible within the existing system. The modern, deregulated system is perfectly capable of incorporating higher price caps, higher entry requirements for companies, or other incentive compatible steps to raise the threshold of preparedness. This would make electricity more expensive. It is a political trade-off and the setting of the appropriate parameters is a political decision. Within the given parameters it is right to claim that the system has worked just as intended. It has done so for 20 years 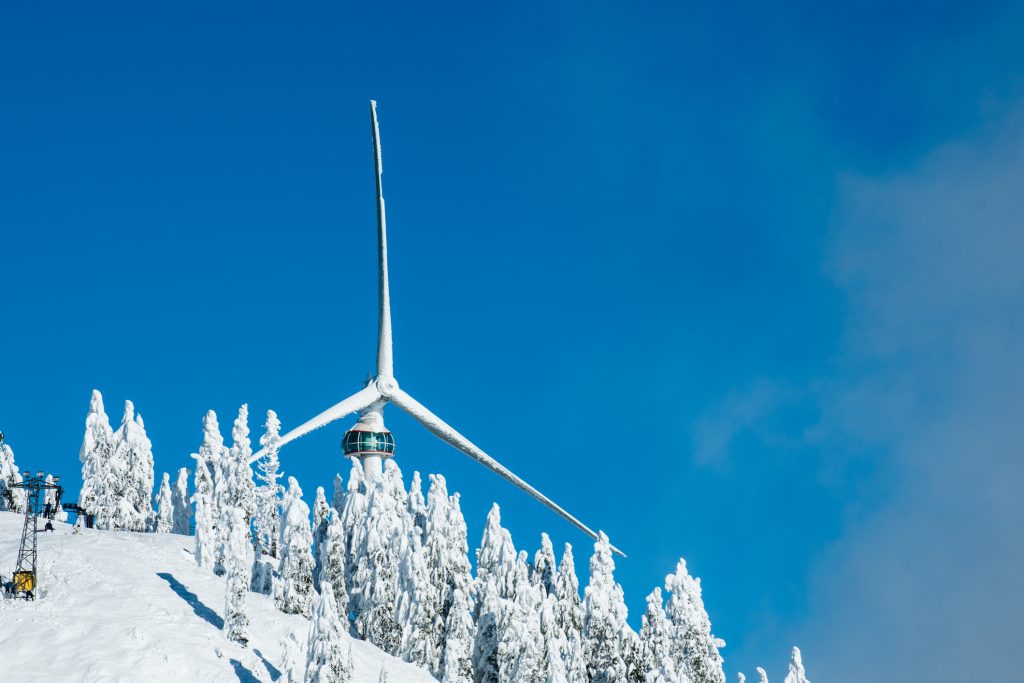 From the global perspective, the idea to endogenize the size of the spare capacity cushion is a simple and effective way to address the increase in volatility introduced by a rising share of power generation from renewables. If there is a problem at all, it does not seem to be on the (supply) side of transparent electricity provision but on the (demand) side of equal access.

Retail and wholesale consumers can choose from a variety of fix and flex price contracts for the provision of electricity. Fixed price contracts insure against price spikes and appear therefore more expensive. The problem is that not only customers who can afford temporarily higher prices will purchase flexible contracts in the hope of “normality” prevailing over the contract period. Low-income households, small businesses, everyone with uncertain financial prospects may (have to) do so, too. Electricity has public good characteristics. It is important enough to impose a negative externality on the rest of us if some members of society have no access to it (after severe disturbances the cost of those who accessed expensive electricity but couldn’t afford to, is usually socialized anyway).

There is hard economic logic to the idea of an insurance scheme, not just the phrase about insult and injury conjured up by the image of a family on the minimum wage having brazed days in the cold to then receive a four-digit electricity bill.

The need to insure those who are not able to live with the consequences of market pricing (and the part of the public which will end up paying for them) is one of the lessons from last week. Luckily, this is a question economists are well equipped to answer. It will not be a journey into the unknown.

There is also a new reason emerging for why we should safeguard the idea of incentivizing power providers to hold spare capacity. It relates to the intermittency problem, this fundamental difference between “new” renewables and “old” fossil (and nuclear) generation. When it comes to supply security, wind and solar cannot be relied upon because they are hard to transport and to store. In addition, they have the potential for an asymmetric response: A disruption of the “new” segment of a power system will affect generation to the extent that renewables are taken out; disrupting the “old” segment may be amplified to the extent that it additionally affects back-up and baseload generation which is needed for the new segment to function.

It doesn’t take disaster scenarios to acknowledge that better interconnectedness and more spare capacity will be needed globally to buffer the system in its day-to-day operations, as the share of intermittent renewables rises because of climate policy. The (highly interconnected) European grid, for example, also came close to more general blackouts in early January, following not a big storm but relatively small local disruptions.

One of the key characteristics of the market design in Texas is the simple and effective way in which the decision about the necessary buffer of spare capacity is delegated away from the discretion of a central planner to that decentralized discovery machine we call market. One does not need to claim perfect implementation to conclude that the market design makes the redundancy requirements of an increasingly complicated system more transparent, more rational, and more cost effective. The Texas model is actually more suitable to the new world of clean energy technologies than the old idea of vertical integration. It will spread rather than being vilified as the transition progresses.

Stepping back a little further, there is yet another insight looming. Not even in power generation, where literally all primary fuels can compete, have we been able to simply replace fossil with clean energy. Too big the size difference, the technical problems and the economic gap between the old and the new. This transition is different from the times when first coal and then oil rose to become the dominant fuel on the back of superior economic and convenience properties. Modern renewables lack these features.

The wider energy transition therefore cannot be a simple process of substituting clean for fossil energy. Its success will depend on our ability to exploit complementarities between the two segments. What better symbol for our need to learn more than people using ICE powered cars as energy storage, to back-up their mobile phones – one cold, dark night in Texas.