When people think of Saudi Arabia, they often think of oil. After all, it is the world’s largest exporter of the resource, and its economy is heavily dependent on oil revenue. Now, however, Saudi Arabia has grand plans for its reserves of natural gas.
Many may not know that Saudi Arabia has the world’s eighth-largest proven natural gas reserves, after Russia, Iran, Qatar, Turkmenistan, the U.S., China and Venezuela. It is also the ninth-largest gas producer, after the U.S., Russia, Iran, Qatar, China, Canada, Australia and Norway. However, all the gas produced in the kingdom is consumed domestically, primarily for generating electricity, water desalination and as a feedstock for the petrochemical industry. All these uses are expected to grow rapidly as Saudi Arabia develops its industrial sector and pursues economic diversification.
Fuel Injection: Electricity generation in Saudi Arabia 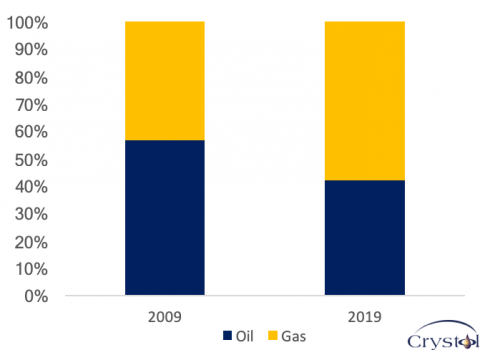 The Kingdom is currently pursuing three main goals: to double gas production (including from local shale resources), to eliminate the use of oil in power generation and to become a gas exporter – all by 2030. Saudi Arabia has plenty of natural gas, so it has a strong foundation on which to achieve these aims. However, the country has a better chance of reaching the first two goals than the third within the next nine years.

“Saudi Arabia’s diversification plans could be derailed by the oil price crash“, Christof Rühl, May 2020