Over the last two years, Chinese leaders announced several ambitious climate-related targets and plans, most notably reaching carbon peak by 2030 and achieving carbon neutrality by 2060. China is the world’s largest emitter of CO2, accounting for one-third of global emissions. “[N]o pledge is as significant,” declared the International Energy Agency (IEA). The pace of the country’s emissions reductions over the coming decades will determine whether the world succeeds in preventing global warming from exceeding 1.5 degrees Celsius.

China is also the world’s largest energy consumer. Both its energy and electricity mixes are heavily dominated by coal, which is by far the worst emitter of greenhouse gasses (GHG).  Unsurprisingly, to achieve its ambitious climate targets, Beijing is heavily focusing on curbing coal use and substituting it with cleaner sources of energy. Although official plans favor non-fossil fuels (nuclear and renewable energy) particularly in the longer term, China’s blueprint also entails a greater role for natural gas. 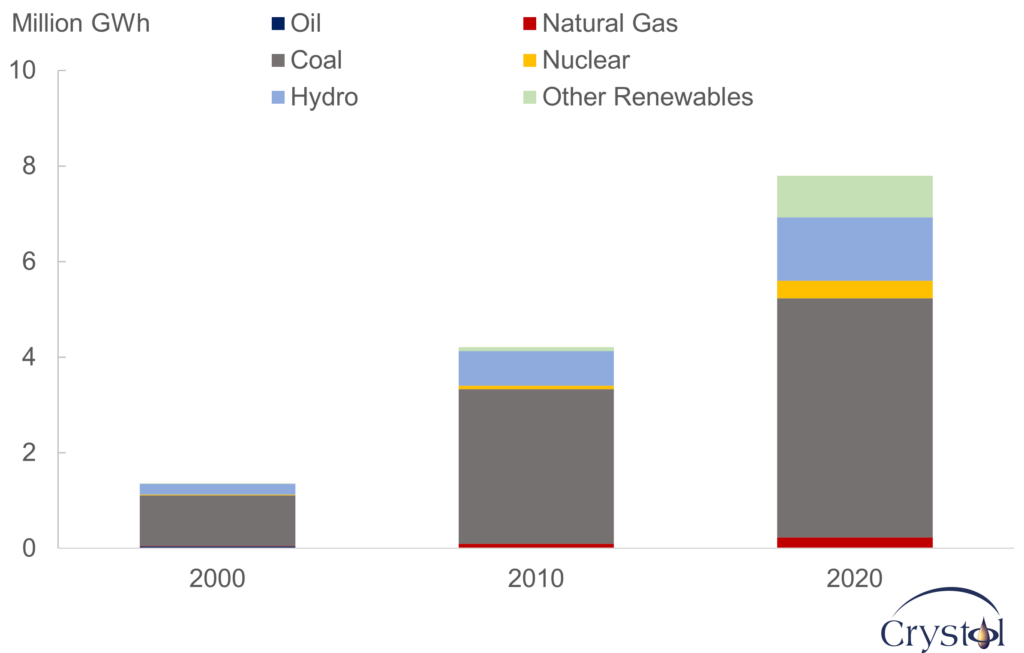 These energy plans, however, were developed before the current global energy crisis, which has been amplified by Russia’s invasion of Ukraine and has caused serious fears about energy security and import dependence. Some countries, even in Europe where momentum for the green transition is strongest, are reconsidering their energy priorities as their economies struggle with rocketing energy prices and subsequent inflationary pressure.

The Chinese government aims to achieve the “right” balance between energy security and self-sufficiency, economic development and the preservation of the environment. In one of its 2021 guidance reports on carbon targets, Beijing emphasises that “the efforts to reduce pollution and carbon emissions must be balanced with the need to ensure the security of energy, industrial chains, supply chains, and food, as well as normal daily life.” It remains to be seen whether China will revisit its energy plans in light of recent events. Such changes could affect energy markets as well as the global climate agenda. The world will be watching closely.

Since 2020, China has published several plans, policy papers and guidance reports unveiling its energy and climate ambitions for the next 40 years. Achieving its dual aims of carbon peak by 2030 and carbon neutrality by 2060 (with the share of nonfossil energy consumption over 80 percent) “requires extraordinarily hard efforts from China,” President Xi Jinping said at the Leaders Summit on Climate on April 22, 2021.

China’s 14th Five-Year Plan for 2021-2025, unlike the preceding strategies, does not explicitly state a numerical gross domestic product (GDP) growth rate target. Instead, the government suggests a system of indicative economic growth rates for the period. “Proposals for the average annual growth of GDP will be maintained in a reasonable range based on the situation each year,” the government said. The uncertainty created by the Covid-19 pandemic has been considered the main factor behind such vague aims. It is also a sign that Beijing expects decelerating growth.

This latest strategy, however, contains several specific energy targets. Chief among them is to reduce energy consumption and carbon dioxide emissions per unit of GDP by 13.5 percent and 18 percent respectively from 2020 levels. The document contains plans to increase the proportion of nonfossil energy in total energy consumption to about 20 percent. President Xi Jinping’s speech at the Climate Ambition Summit in December 2020 also referred to further increasing the proportion of nonfossil fuels to 25 percent by 2030 and lowering carbon intensity by over 65 percent from the 2005 level.

These targets go hand in hand. By altering the mix of fuels in both the primary and electricity mixes, reducing the share of high carbon emitters and replacing it with lower emitters, carbon intensity can be reduced accordingly. This explains why China’s plans focus on dethroning coal. However, the government has not set a specific numerical target in that respect. For instance, in a separate guidance document published in October 2021, coal consumption is meant to “be reduced at an accelerated pace,” thereby preserving a certain degree of flexibility. 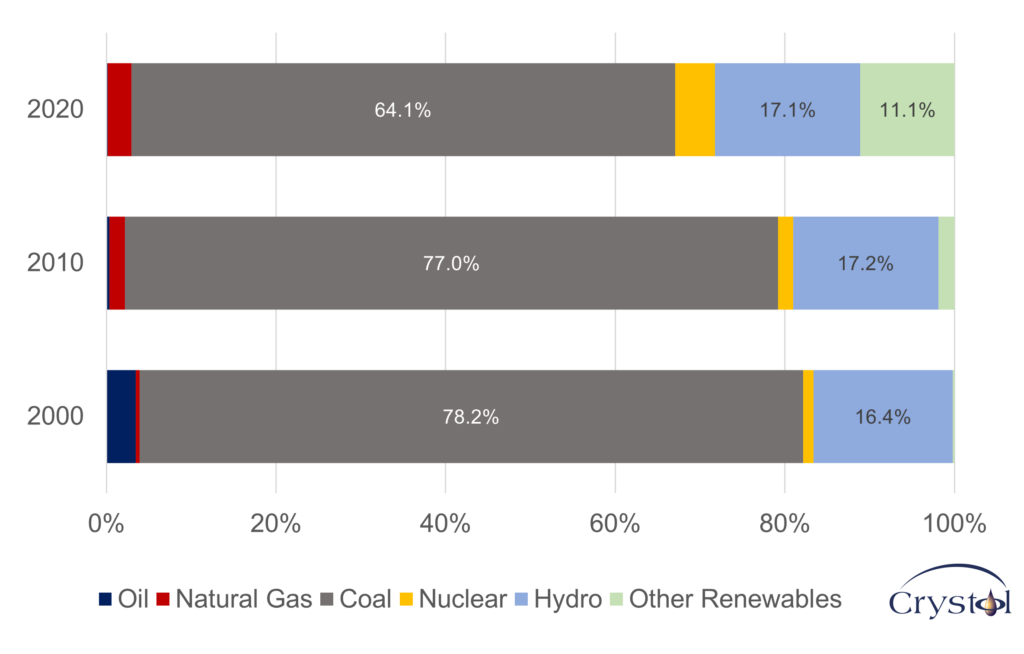 China is a coal-fueled powerhouse. It is the biggest coal producer and consumer, accounting for more than half of the world’s coal production and consumption. Its coal reserves are the fourth-largest after the United States, Russia and Australia; they are affordable and widely available domestically. This makes coal attractive from the perspective of both energy security and cost, despite its environmental drawbacks.

A quick glance at China’s energy and electricity mixes highlights the scale of the challenge ahead. No fuel comes close in either mix. It has taken China 20 years to reduce coal’s share by less than 5 percent in the energy mix. While the share of coal has declined over the last 20 years, in absolute terms, coal consumption has increased along with all the other fuels, with oil being the only exception in power generation. 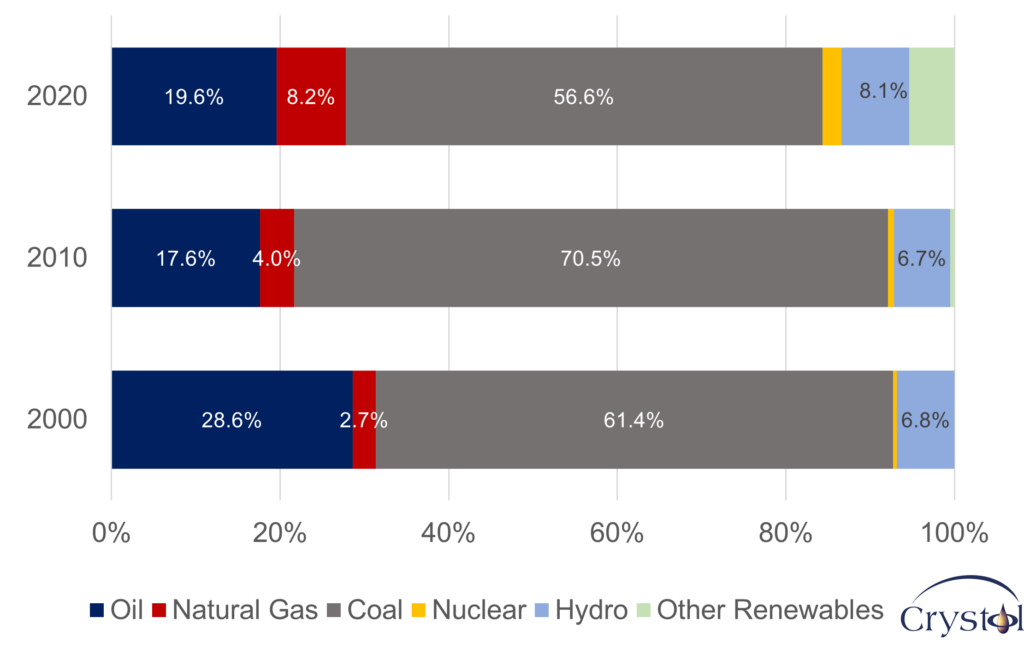 The reduction in coal use has been replaced by renewable and nuclear energy as well as natural gas, which in principle should continue to gain more prominence as Beijing looks for alternatives to coal. Already China is the world’s largest generator of energy from solar (31 percent), wind (29 percent), geothermal (19 percent) and hydro (31 percent) and ranks second in nuclear power generation (14 percent) after the U.S. The last two decades have seen remarkable growth in this regard and the trend is likely to continue based on current plans.

Natural gas also fits into China’s low-carbon goals (in addition to improving air quality). Although gas is, like coal, a fossil fuel, it emits half the amount of CO2 per million British thermal units of energy than coal does. Furthermore, given the intermittent nature of renewable energy and the current limitations of energy storage technology as well as the technical complexity of nuclear power, natural gas is likely to be an important part of China’s energy transformation.

China is gas-rich; it is the world’s fourth gas producer (after Russia, the U.S. and Iran) and the third consumer (after the U.S. and Russia), accounting for 5 and 9 percent of the world total respectively. However, consumption has been rising much faster than production. China has become increasingly dependent on imports – primarily through liquefied natural gas (LNG) largely purchased under long-term contracts, with Australia being its largest supplier in addition to pipelines from Russia (through the Power of Siberia gas pipeline) and Central Asia. 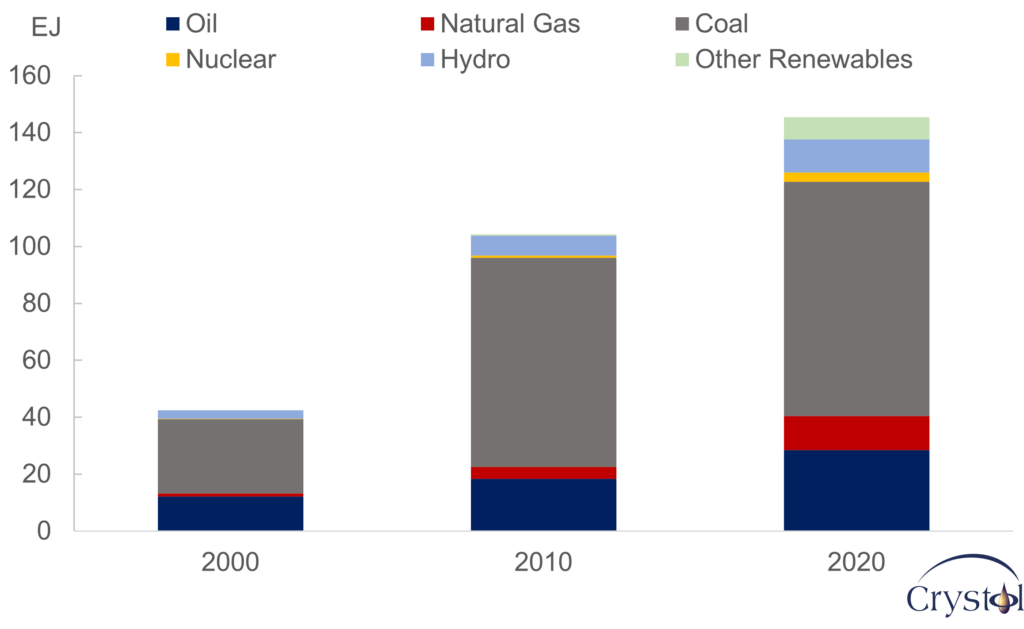 Before this year’s energy crisis, the pace of China’s gas demand growth was expected to be maintained. The IEA estimates that China will be the single largest contributor to global gas consumption growth by 2025. Such growth would have a significant impact on gas markets as China would need to secure additional imports. In 2020, for instance, China became the largest buyer of LNG, overtaking Japan. It initially contracted 73.5 billion cubic meters (bcm) of LNG imports. Then, due to a cold winter and the switch from coal to gas (further encouraged by coal import limitations from Australia), the country had to contract an additional 18 bcm on the spot market. This additional demand contributed to a sudden spike in Asian gas prices and propelled spot prices for LNG in Asia to previously unforeseen heights. European markets faced repercussions since LNG that was originally sailing to Europe was diverted to Asia, attracted by higher prices. Such a dynamic sowed some of the seeds for the gas crisis that Europe faces today.

To reduce its vulnerability to the price volatility of imported energy, the Chinese government has reiterated the need to develop domestic gas resources. China sits on the world’s sixth-largest proven gas reserves (after Russia, Iran, Qatar, Turkmenistan and the U.S.) and on the world’s largest technically recoverable shale gas resources. Beijing has launched an aggressive program to increase shale gas production. The expansion of domestic natural gas supplies is lagging beyond government targets. If China does not ramp up its domestic production and relies only on additional LNG imports, the impact on global markets in the coming few years will be significant. The looming supply gap will mean high gas prices for Beijing, with far-reaching consequences for its economy and potentially for energy security both in China and globally. The desire to avoid such an outcome may lead to a slower shift from coal to gas.

Reading between the lines

China’s green agenda is good news from the climate perspective. However, while these pledges may seem ambitious, China is keeping its options open, and the effort may not be as extraordinary as it currently appears.

The fact that the carbon emissions reduction target is promised in terms of intensity means that China will have some leeway. Many advanced economies have committed to a reduction of carbon emissions in absolute terms (e.g., tons of CO2 relative to a particular benchmark year). In contrast, choosing a relative carbon intensity target could mean that carbon emissions would not be reduced as strongly as the numbers suggest. For instance, China achieved a 40-45 percent reduction in carbon intensity from the 2005 level by 2020 (according to the 14th Five-Year Plan). But CO2 emissions rose over the same period. 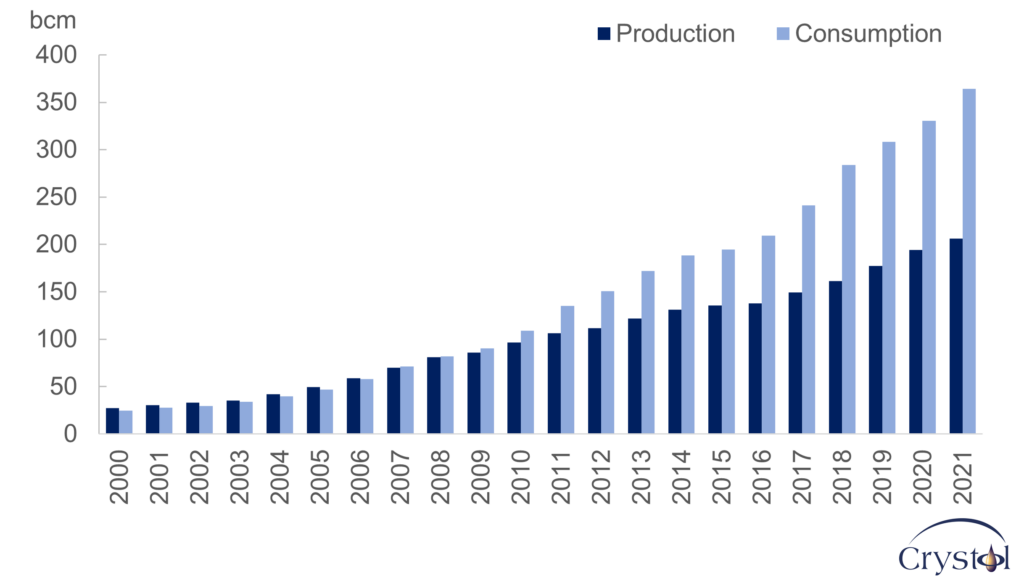 In the more immediate term, some fear that the rapid rise in gas prices and the ongoing crisis, particularly in Europe, will make China reconsider its climate goals. Beijing could backtrack and stick to coal to boost its security of supply and safeguard its economy. China’s National Energy Administration recently posted on its website an article that argued that the European energy crisis is a warning for China’s energy transformation. The article published by the organization argues that the main reason behind the crisis is that the energy transition in Europe is “too fast and too violent.” The head of the Administration also expressed the government’s top priority: “we must make every effort to ensure energy security.” This means putting the economy first. It looks as if China might, after all, cling to old king coal for a little longer.

“A brief history of the energy crisis: chaos, trial and much error“, Lord Howell, Apr 2022