Only a year ago, the International Energy Agency (IEA) argued that there was no need for investment in new fossil fuel supply in its net zero pathway. “Beyond projects already committed as of 2021, there are no new oil and gas fields approved for development in our pathway, and no new coal mines or mine extensions are required” the Agency said in its flagship report Net Zero 2050 (published in May 2021). Such a statement boldly put investment in fossil fuel – that is coal, oil and natural gas – on a collision course with climate change.

Fast forward a year later, calls have increased for more – not less – investment in oil and gas. For instance, in the United Kingdom, which hosted the 26th UN Climate Change Conference of the Parties (COP26) in Glasgow in Autumn 2021, the government has openly stated its support for more investment in the oil and gas industry. Responding to criticism by climate activists, the UK’s Secretary of State Department for Business, Energy & Industrial Strategy plainly said in a tweet in May 2022: “ … I’m not going to put Britain’s energy security at risk by shutting off domestic oil and gas production”. Also in May, the European Union (EU) – easily the most proactive region in the world in its pursuit of the climate agenda, published a plan entitled, REPowerEU: affordable, secure and sustainable energy for Europe’, where it concedes that “In the new reality… some of the existing coal capacities might also be used longer than initially expected, with a role for nuclear power and domestic gas resources too.’

That reality refers to the major risks currently threatening the security of energy supplies, given the ongoing conflict in Ukraine.

Those developments although perceived by some as ‘European’ problems have far reaching consequences on global energy markets and energy trade flows, with higher oil and gas prices almost everywhere being the most obvious manifestation of that contagion. The rapid acceleration of new LNG facilities for export from the US being another.

The European conflict, and associated energy disruption, is the second major shock that has occurred in less than two years – the first being the Covid-19 pandemic, which the International Monetary Fund described as ‘a crisis like no other’. Economies, the world over, have not yet fully recovered from the scarring of the pandemic. This   has simply made a bad situation worse for many. The relentless rise in commodity prices – primarily energy and food – is a serious threat to global recovery. Gasoline prices in the US have hit record high, so have natural gas prices in Europe. The United Nations recently warned of a global food crisis that may last for years.

The subsequent deterioration in the standard of living for many people around the globe and the rise in energy poverty risk weakening support for climate-related policies. A survey recently carried out by consultancy Deloitte found that the cost of living is the top concern among Millennials and Gen Z ahead of climate change. This, however, does not mean that we will see a sudden reversal in climate related policies, but rather a sensible rebalancing of priorities.

Before the current ‘crisis souffle’, discussions about the future of energy became increasingly polarized and narratives were simply disconnected. The recent crises, however, have shown that the searches for energy security and for climate security must be allied. They have also shown that investment in conventional fuels, primarily oil and gas, is still much needed, as is investment in greener energy. After all, energy security is about ‘reliable, affordable access to all fuels and energy sources’, as put by the IEA and it can be achieved by diversity and diversity alone. 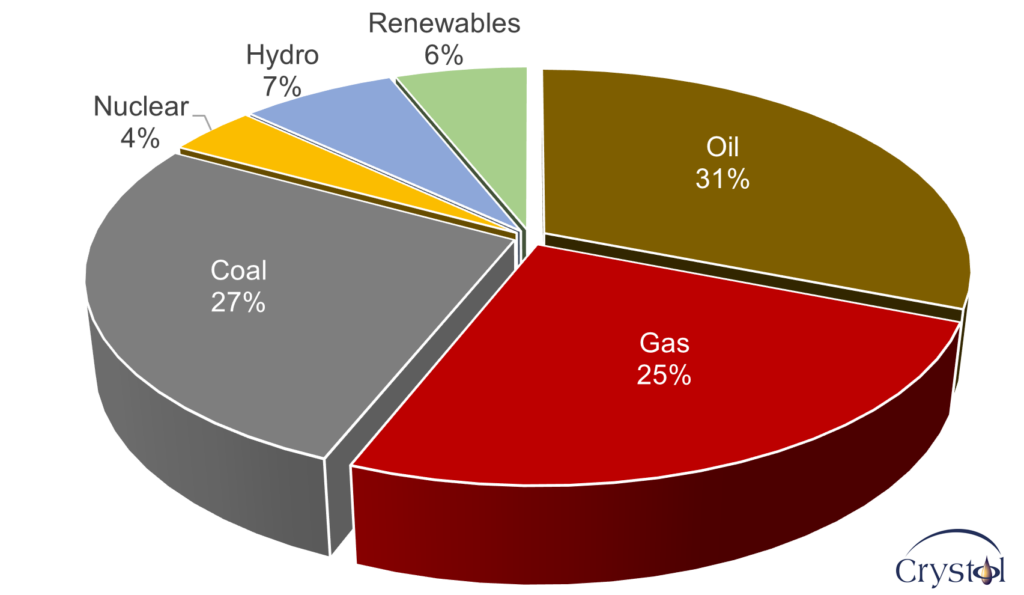 Today, oil and gas provide more than 56 percent of world’s primary energy mix (with coal, that share climbs to 83 percent). The relative size of the global energy system’s fossil and non-fossil components simply suggests that fossil fuels will dominate global energy consumption for decades to come (absent unpredictable technical breakthroughs). The EU is in the short term not able to replace sanctioned oil and gas with green energy; it is replacing it with oil and gas coming from elsewhere. European accelerated green energy projects will of course help in reducing the EU’s dependence on imported hydrocarbons but engineering and construction limits means this will take time to materialise. Until then, homes must be kept warm, streets lit, and factories humming.

And it is not just the scale of the system that supports a greater integration of fossil fuels and green energy. Given the current limitation on energy storage, scaling up renewable energy, for instance, needs back up fossil fuel-based power plants, to overcome the variability and intermittency problems, when the wind is not blowing, and the sun is not shining constantly. Then there is another dimension that lends further backing for an integrating approach. Oil and gas companies – private and state-owned alike – have the necessary resources – financial, technical and human – to play an active role in the energy transition. Today, even more so as they enjoy record profitability because of higher energy prices. Most of those companies have committed to sustainable investment – both in their conventional business and in technologies and projects that favour the energy transition – from carbon capture and storage (CCS) to renewable energy projects including hydrogen.

Back in 2007, Dr Nakhle published a book where she argued, along her co-author, Lord David Howell, that harnessing the two causes of energy security and climate security would be to create a grand unity of purpose “which the world so conspicuously lacks at present”. The time may have finally come where that unity can be achieved. One valuable lesson the current energy situation has taught us is that energy security and climate security are two sides of the same coin; they deserve equal attention, and they can both be pursued simultaneously.

The article was first published by AspenTech Blog

“Solving the Complexity of Energy Security and Sustainability with Digital Technology“, June 29, 2022

PrevPreviousNorth Sea energy: The UK’s valuable national asset
NextRussia’s oil is in long-term decline – and the war has only added to the problemNext