A hydrogen rush is sweeping the world. In 2014, Japan adopted a road map to become a “hydrogen society.” In its 2019 National Hydrogen Strategy, Australia outlined goals to become a major producer and exporter by 2030. The European Commission’s 2020 economic recovery plan “NextGenerationEU” describes hydrogen as “an investment priority to boost economic growth and resilience, create local jobs and consolidate the EU’s global leadership.” And in the United States, where government interest in the resource goes back to the 1970s, in June 2021 Energy Secretary Jennifer Granholm launched the “Hydrogen Shot” policy framework, which seeks to reduce the cost of clean hydrogen by 80 percent in a decade.

But while the Middle East’s recent enthusiasm for hydrogen is based on a sound rationale, unlike most countries elsewhere, the region does not intend to move away from oil and gas.

Hydrogen production costs in different parts of the world 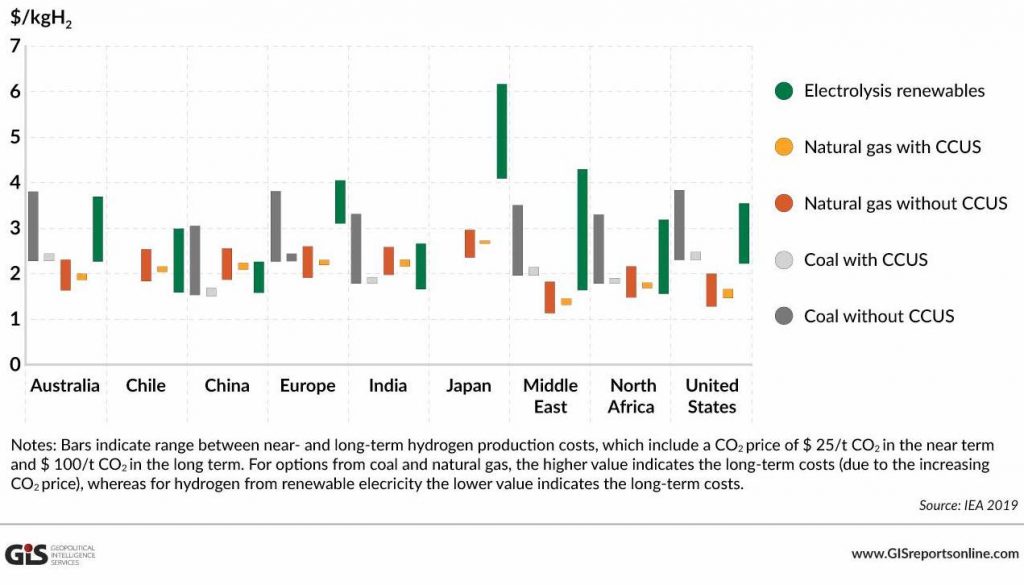 A bit of chemistry

Hydrogen is the simplest element on Earth: its atoms have only one proton. Although abundant, it does not occur naturally and is typically found in combination with other elements and organic compounds such as water and hydrocarbons. Natural gas, for instance, contains one carbon and four hydrogen atoms per molecule. Pure hydrogen (H2) is made by separating the carbon from the hydrogen molecule.

Although hydrogen is the same everywhere, it is categorized by color depending on its source and the methods used for producing it. Brown and gray hydrogen are fossil fuel-based: the former comes from coal, the latter from natural gas. According to the International Renewable Energy Agency (IRENA), natural gas is currently the primary source of hydrogen production, accounting for around 75 percent of annual hydrogen output (6 percent of global natural gas use). Coal comes next, at an estimated 23 percent of global production (2 percent of global coal use). The rest comes from sources like oil, electricity and biomass.

From a climate perspective, an even better production mechanism involves producing hydrogen from green energy sources, such as renewable energy (e.g. solar and wind) and nuclear power. In this case, the hydrogen is described as green or renewable. Typically, it is produced through water electrolysis, which simply splits the hydrogen and oxygen present in the water using electricity coming from green energy.

The colours of hydrogen 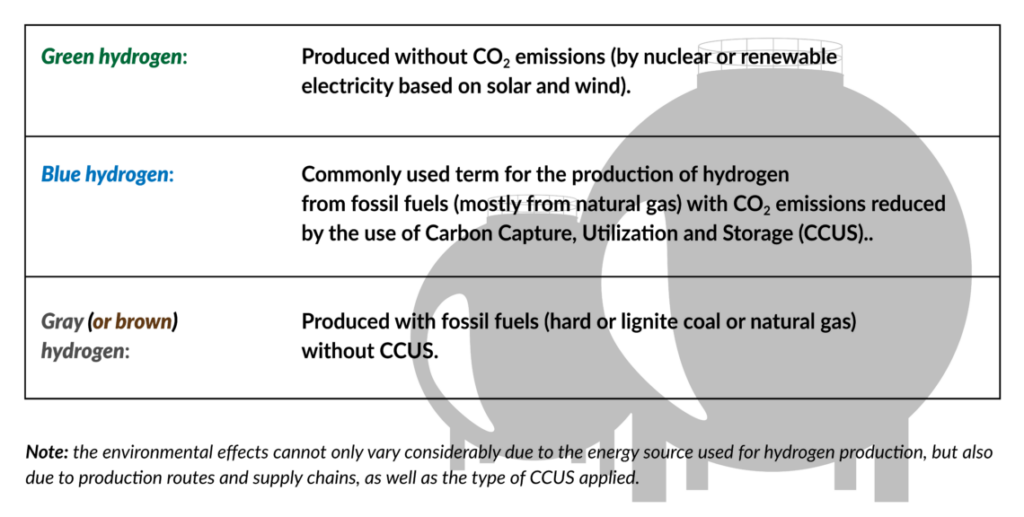 Once produced, pure hydrogen becomes a versatile energy carrier that does not emit CO2 or other pollutants. For instance, it can be used in fuel cells in mobility (from vehicles to trains) thereby “cleaning and greening” the transport sector. It can also produce power and provide feedstock in a variety of industrial activities, slashing their carbon footprint.

Another crucial feature of hydrogen is that it can be used to store energy. This means the resource could play an important role in the expansion of renewable power sources, which is currently constrained by the lack of viable storage options.

Out of all these processes, producing hydrogen from fossil fuels is the only well-established practice, both technically and commercially. Most, if not all, of this type of hydrogen is made for industrial use: oil refining, ammonia (widely used in food, fertilizers and pharmaceuticals), methanol (mainly for chemicals) and steel production. According to the Energy Information Administration (EIA), tighter sulfur-content regulations have boosted the demand for hydrogen, which helps lower the amount of sulfur in fuels and increases their appeal and value. In this respect, hydrogen and its uses are nothing new. What is driving the new craze, however, is blue and especially green hydrogen. 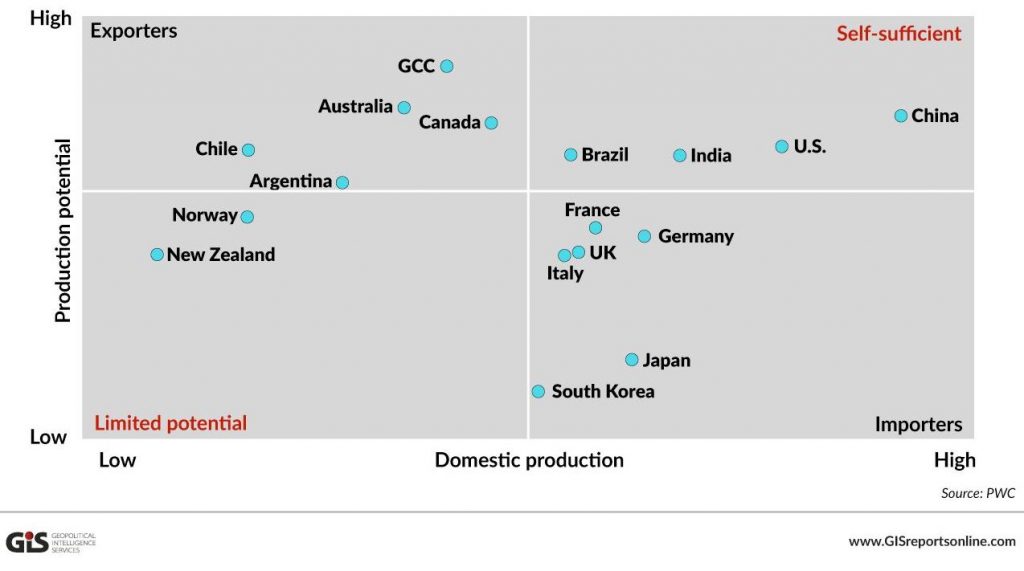 According to the International Energy Agency (IEA), demand for hydrogen has grown more than threefold since 1975. That figure is expected to increase much faster should current plans succeed. Furthermore, hydrogen could become a globally traded commodity, particularly if it becomes an important source of energy. The European Commission estimates that clean hydrogen alone could meet 24 percent of world energy demand by 2050, with annual sales in the range of 630 billion euros. This, however, would amount to a quantum leap; the current use of hydrogen for energy purposes is estimated to be between 1 and 2 percent of total consumption.

A study commissioned by the Australian Renewable Energy Agency identifies the following potential competitors in a global market: Australia, Brunei, Iceland, the Middle East and North Africa, Norway, and the U.S. Asia would be the main source of demand.

It is noteworthy that, whether for gray, blue or green hydrogen production, the Middle East seems to be at an advantage, though disparities in findings remain. For instance, according to the IEA, the Middle East has a clear advantage in producing gray and blue hydrogen given its large, low-cost hydrocarbon reserves as well as suitable geological formations for storing CO2. The agency argues that fuel is the biggest single component of hydrogen production costs and that, in the near term, hydrogen production from fossil fuels will remain the most cost-competitive option in most cases. Another study by Strategy& finds that the Middle East is also at an advantage when it comes to green hydrogen thanks to its vast renewable energy resources, particularly solar power.

If the Middle East is to convert to a clean hydrogen supplier, then blue hydrogen will allow the region to capitalize on its oil and gas assets. This, however, will not come cheap given the added cost of carbon capture and storage – still a developing technology.

Absent a technological breakthrough, the economic rationale for green hydrogen in the Middle East is less compelling. Costs are at least triple those of blue hydrogen and financing would be a serious issue. Given the significant dependence of government revenues on oil and gas in the region, green hydrogen, though its production does not require oil and gas, would have to be sponsored by fossil fuel revenues. The irony is that the more ambitious the Middle East’s green plans are, the more oil and gas revenues it will need to fund those plans if the current economic structure remains in place.

Interestingly, Qatar – which sits on the world’s third-biggest proven gas reserves after Russia and Iran – stands out from the rest of the Gulf Cooperation Council and has openly stated that hydrogen is not currently on its agenda. In an interview given to S&P Platts in May 2020, Qatari Minister of State for Energy Affairs Saad Sherida al-Kaabi,  stated that Qatar was monitoring developments in clean energy, particularly hydrogen. But he also cautioned that substantial financing and technological challenges lie ahead before such solutions can be deployed on a commercial scale.

Indeed, there are many reasons why hydrogen – such a simple and widely available element – has not taken over world energy systems to date. Cost is perhaps the biggest factor. Uncertainty about demand is another. A widespread shift would also require building and adapting large-scale infrastructure, as well as regulatory changes.

Some have described the hydrogen challenge as a “chicken and egg” problem. For instance, what comes first – the cars or the refueling infrastructure? The oil and gas-rich countries of the Middle East are unlikely to solve the riddle.

Facts & figures: The rise of hydrogen