In this interview to Constantin Schreiber from Pipeline Technology Journal, Dr Carole Nakhle, CEO of Crystol Energy, discusses the causes and remedies of the energy crisis in Europe.

The prevailing energy crisis in Europe has exposed the EU’s underlying problems that were overlooked for many years.

According to an energy economist, Dr Carole Nakhle,  CEO of Crystol Energy, an advisory, research, and training company in London, Russia’s invasion of Ukraine only amplified the already existing problem that was brewing over the years, explaining how the problem has been in the making for years and how the current crisis can be resolved and averted in the future.

Dr Nakhle broadly categorized the causes of the current energy crisis in Europe into three: the development of gas markets, dependence on Russian energy supplies, and confusing policy signals.

Effects of the Development of Gas Markets

“While the energy crisis in Europe has been amplified by the Russian invasion of Ukraine, it actually has other drivers that have been in the making for years. First, there is something, of course, beyond the EU’s power: the development of the gas market. In the past, we used to have very distinctive and separate regional gas markets. For example, whatever happened in Asia stayed in Asia and whatever happened in Europe stayed in Europe.

“But, with the development of LNG trade, markets became more connected. And that’s why if you go back in the last two years, you can see that gas prices began to rise well before March of 2022. And this goes back to Asia having a cold winter and then recovery from lockdowns. This diverted LNG cargoes that were originally going to Europe toward Asia.

“In summer 2021, we saw high gas prices, which we only see during very cold winters, such as the Beast from the East in February 2018. That, by itself, should have raised concerns. Then Russia started to curtail its supplies to Europe, worsening an already tight market,” Nakhle explained during an interview with our media team.

Dependence on One Major Supplier— Russia

“Another problem, which was within the EU’s control, is the dependence on Russia. Although the EU has managed to reduce its dependence over the decades, that reduction has been relatively slow, especially when one takes into consideration what the EU has achieved this year. In this respect,  the EU should have pursued a greater diversification of supplies much earlier and faster. After all, the foundation of energy security is diversity and diversity alone.

“Existing and potential suppliers, whether in Africa, the Middle East, or North America, can all contribute to meeting gas demand in Europe and replacing Russian gas. Even though we have very aggressive climate change policies in the EU, everybody acknowledges that gas will continue to play a role in meeting energy demands in the region and elsewhere.

But the key again is to avoid relying too much on one single supplier, irrespective of who the supplier is,” she said.

While emphasizing the significance of energy supply diversification, Nakhle warned the EU against relying on a single source of energy supplies, whether the country is known to be a reliable supplier by excellence like Norway, adding that such a decision may turn costly if, for instance, the supplier faces an unforeseen political crisis, oil and gas industry strikes or accidents that would disrupt normal energy supplies to the market.

“In the end, it is about diversifying your risk. You don’t want to put your eggs in one basket,” she warned. 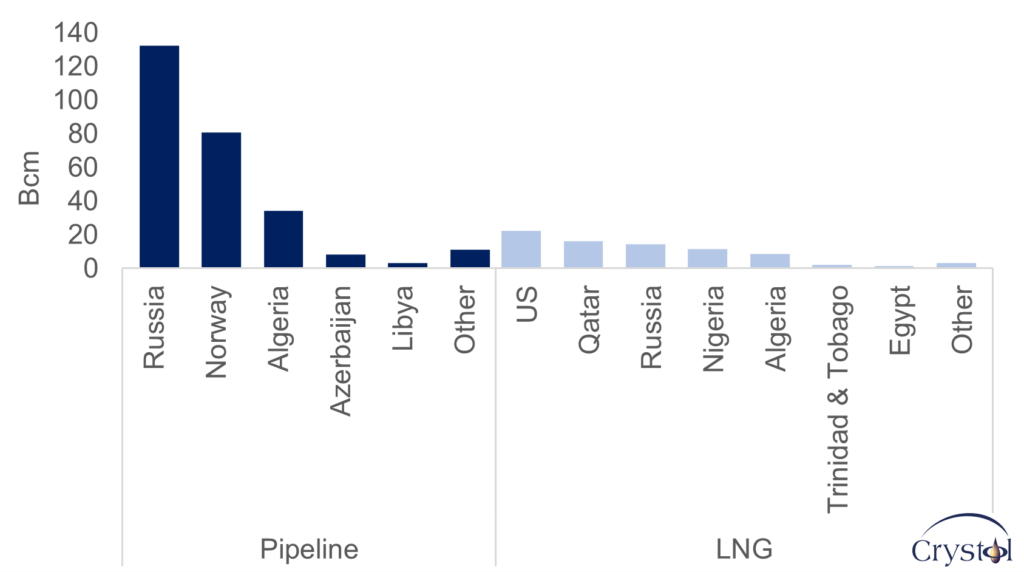 Other Potential Energy Suppliers to the European Market

“For East Mediterranean, I know the deal between Lebanon and Israel caught headlines, but the speed at which the deal was conducted, bearing in mind that such disputes take years and decades to be resolved, and we’re talking about two countries that are officially at war, raises many questions. I’m more interested in what has not been written and published.

“In terms of the region’s contribution to the EU’s security of supply, it’s very limited in the short to mid-term. Israel has massive gas reserves, but they want to safeguard a good proportion for domestic use. Although large gas discoveries were between 2009 and 2010, to date, Israel has not been able to make a big splash in LNG markets. Will that now change overnight? I doubt it. As for Lebanon, commercial discoveries are yet to be made.

“A degree of realism is therefore needed. After all, gas business is a long-term affair though shale gas is the exception. One way to speed up the export potential of the region is to send gas to Egypt, which already has a well-developed export infrastructure and has the ambition of becoming a regional hub, and then send it to Europe. Still, this is not going to resolve Europe’s gas crisis today. I therefore don’t buy the argument that the deal between Israel and Lebanon was triggered by the need for Europe to find alternative gas suppliers to Russia. It is a very simplistic argument.”

Dr Nakhle also explained the growing potential for African countries to become major suppliers of energy to the European market but made it clear that the continent cannot replace Russia since its supplies are just a fraction of what Russia supplies to Europe.

“Africa has great potential and is already an important supplier to Europe, especially if you look at Northern Africa. But it’s not as big as Russia. Actually, whatever Africa has is just a fraction of what Russia supplies. So, Africa, on its own, cannot Replace Russia.

North Africa has maxed out its exports unless investment increases and domestic demand is tamed. Local consumption is eroding the export capacity of Algeria and Egypt.

East Africa can make a notable difference in bringing additional supplies to the market, with Mozambique billed to be among the top 10 largest LNG exporters by 2025.

Note that the discoveries in East Africa happened at the same time as in East Mediterranean. But Mozambique has already joined the club of LNG exporters and will be a much bigger exporter in 3-4 years.

In this respect, East Africa can make a significant contribution to global LNG markets. I say ‘can’ because they do have the resources, and Mozambique, in particular, has done a good job in encouraging investments, unlike Tanzania, where we’ve had problems with policies, government changes, etc. But there’s always a political risk. So, that again raises the question of reliability and the need for diversification,” she added.

In a nutshell, the answer for Europe is to diversify its energy sources and suppliers, according to Nakhle. Nakhle also mentioned sending a consistent message to investors as one of the ways to ensure supply flow to the market.

“Gas business is a long-term business. You don’t tell exporters I want your LNG for a year or two. Instead, exporters will direct their gas to Asia, which is hungry for gas. Investors need long-term guarantees that there will be demand for their gas. Just like consumers look for the security of supply, producers seek the security of demand.

“So, that’s another thing within the EU’s control; governments should enact consistent policies which build on cooperation and mutual interests. They should also be honest, bold, and transparent. After all, you cannot achieve climate security without energy security,” she concluded.

The article was originally published by Pipeline Technology Journal